Online crime continues to reach new heights, according to the latest edition of the FBI’s annual Internet Crime Report.

Last year the agency’s Internet Crime Complaints Center (IC3) received 467,361 complaints — about 1,300 a day — with reported losses exceeding US$3.5 billion, the highest number of complaints and the highest dollar losses reported since the centre was established in May 2000. 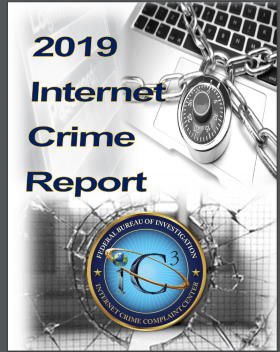 One bright spot: The IC3’s Recovery Asset Team (RAT), which assists in recovering funds for victims of business email compromise schemes, helped recover over US$300 million lost through on-line scams. That’s a 79 per cent return rate of reported losses.

One of the most recent cases involving a gang that specialized in thefts related to swapping SIM cards in smartphones. led to an arrest of the alleged leader and the seizures of over US$18 million, five vehicles, a $900,000 home, and hundreds of thousands of dollars in jewelry. Overall the scheme compromised hundreds of cryptocurrency accounts and caused approximately US$40 million in losses.

Last year the FBI noted an increase in the number of complaints related to the diversion of payroll funds with a criminal emailing a company’s human resources or payroll department to change an employee’s direct deposit information. Usually, the money goes to a pre-paid card account.

The FBI urges organizations to never make any payment changes without verifying with the intended recipient. Meanwhile, individuals should verify email addresses are accurate when checking mail on a cell phone or other mobile device.

Still, the amount of online crime grows. Report highlights include:

Still, the agency understands that if a business can’t function executives will evaluate all options to protect their shareholders, employees, and customers.

Excluding the United States, the largest number of complaints filed with the FBI came from the U.K. with over 93,000. Canada was second with over 3,700.

Annual numbers like these in Canada will be hard to come by until the RCMP’s new National Cyber Crime Reporting Unit (NC3) is fully running in 2023.

In a statement, Donna Gregory, the chief of the FBI’s IC3, said that in 2019 the centre didn’t see an uptick in new types of fraud but rather saw criminals deploying new tactics and techniques to carry out existing scams.

“Criminals are getting so sophisticated,” Gregory said. “It is getting harder and harder for victims to spot the red flags and tell real from fake.”

While email is still a common entry point, frauds are also beginning on text messages—a crime called smishing — or even fake websites, a tactic called pharming.

Howard Solomon
Currently a freelance writer, I'm the former editor of ITWorldCanada.com and Computing Canada. An IT journalist since 1997, I've written for several of ITWC's sister publications including ITBusiness.ca and Computer Dealer News. Before that I was a staff reporter at the Calgary Herald and the Brampton (Ont.) Daily Times. I can be reached at hsolomon [@] soloreporter.com
Previous articleCyber Security Today – The latest FBI Internet crime report, adware on the rise, attacks on Wi-Fi and more
Next articleCyber Security Today – Rutter’s chain hacked, Android text cons and phone scam arrests in Canada