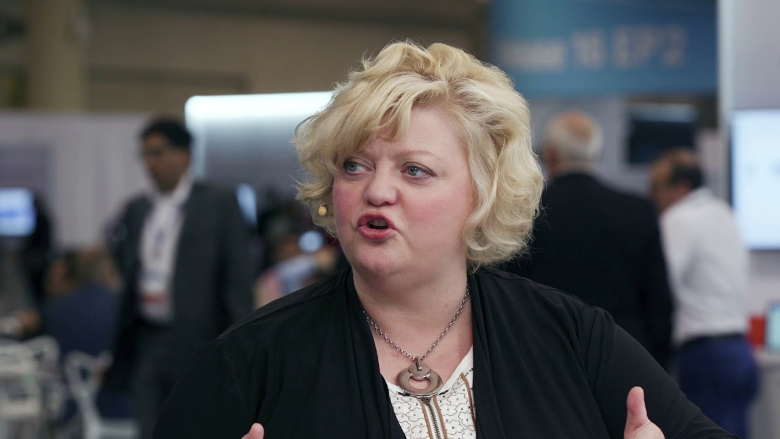 Tara Mulrooney originally joined the Energy Resources Conservation Board as a manager of solutions delivery in 2011, following through on a recommendation from a mentor. The regulator was struggling, and there was a plan for it to take on an even bigger mandate in the next couple of years.

She dove right it, taking on an IT department that was viewed as a black hole of expenses. After just six months at the regulator, she delivered a tough message.

“It’s really simple, when you’re in a hole, stop digging,” she says. “I said to the executive ‘I know that we have this huge demand and we want to achieve all these goals, but I really don’t think we know where we’re going.'”

Not only did Mulrooney convince them that a new direction was needed, she was ultimately tasked with that transformation. Today she’s the chief technology officer at the Alberta Energy Regulator and is recognized industry-wide for architecting a digital solution capable of serving all the regulator’s stakeholders, even after mergers with other government bodies.

Mulrooney is the 2018 CanadianCIO of the Year in the public sector. She was recognized by IT World Canada and the Information Technology Association of Canada at the Ingenious Awards gala event on Nov. 6. We interviewed Mulrooney for our 5 Lessons from New Technology Leaders podcast.

#1 If the IT department has become order takers from the business – stop what you’re doing. Now!

The problem Mulrooney identified at the regulator in her early days was a chasm between the business and the IT department. The Alberta Energy Regulator (AER) oversees the oil and gas sector in Alberta, reviewing applications for development of energy resources and ensuring certain environmental and territorial responsibilities are met.

To do that job, Mulrooney says the organization depends on real-time access to information. But that understanding didn’t exist in the IT department.

“In our sort of profession, we can become servants. We do what we’re told and we don’t ask or illicit enough information to give the business what they actually need, or to recommend alternatives,” she says. “We’d stopped being advisors and became order takers.”

As a result, the regulator prior to the formation of the AER was full of siloed and redundant systems. An effort to retire the mainframe was off course and being directed by IT, not the business.

To course correct, Mulrooney became familiar with the business leaders in the four different divisions of the regulator – the legal department, operations, corporate services, and stakeholder and government engagement. After she had the understanding of their objectives, she knew she had to stop the mainframe retirement project and recommend a new course.

The executive team recognized her vision as strategic and supported it.

#2 Close a gap between business divisions by taking the time to understand what the business needs. Collaborate closely with your colleagues so you know what problems they’re really trying to solve.

Mulrooney didn’t stop at getting to know the business better herself. She made sure that others in the IT department understood its needs by introducing a pilot project called the Enterprise Delivery Team in 2012. It paired senior regulatory personnel with IT staff and focused on completing specific tasks.

“I always think of it as the most fortunate and amazing thing that happened in my career,” she says. “We were never going to get in a position of trust until we learned about the business.”

With the help of colleague Paul Ferensowicz, a senior advisor at AER, Mulrooney put the plan into motion. Suddenly IT people were out in the field, working closely with colleagues and seeing all the details of daily operations first-hand.

The experiment was a success. Ahead of the merger, the regulator was able to accomplish 12 projects in 18 months. After the merger, the model was adopted throughout the business divisions.

#3 Use moments of organizational change as opportunities to reinvent your support systems.

When the merger to create AER came in 2013, Mulrooney had already been promoted to CTO for her insights on how to transform the internal operations. Next she turned her perspective outwards to see how other regulators around the world were running their infrastructure.

“The first thing I realized is you can’t buy an oil and gas regulatory piece of software or system,” she said. “They all had custom-built their own solutions.”

There was no standard model to follow because every regulator had a different set of circumstances and different context to evaluate information from. Mulrooney realized it was similar to business process management, but with a more dynamic quality. She wanted to build case management toolsets and a configurable platform.

AER put its own reference architecture together and invested in enterprise-class tools to fulfill different aspects of it. The data layer was built on Informatica. On top of that, a TIBCO-powered service layer. OpenText’s business process suite provided the dynamic case management tools. Finally, there’s an analytics layer that consists of Tableau, ESRI for the geospatial context, and Geocortex.

The platform became known as OneStop. It was by taking advantage of that moment of disruption – the merger – that Mulrooney found the opportunity to reinvest in her systems and set up the regulator for success.

#4  Let your staff own the strategic plan for your organization.

Another major change that Mulrooney made at AER was the dependency on third-party consultants. Starting in 2012, she started cutting back on external consultants and eventually eliminated 100 such positions. This saved the regulatory $20 million annually, but more importantly, it allowed her team to own its strategic vision.

“All the interesting work was being given to contractors,” she recalls. “As those contracts ended, we chose not to renew and we scaled back… and we started to really hire smart. We looked for consulting skills, soft skills, and more innovative solution building and business analysis.”

Today, Mulrooney will tell you that she has the best IT department in Canada. She feels they can meet any challenge put in front of them.

As a public CIO, Mulrooney sees Albertans as her most important stakeholder. That’s why OneStop is public facing and seeks to create transparency in the development of Alberta’s energy sector. To help explain where the regulator is addressing risks to the environment and safety, a set of experts from technical disciplines provide information.

Mulrooney has also put those expertise to work in improving automated processes. For example, the Alberta Geological Survey is a part of the organization and its science division works on creating data models to predict incidents. Mulrooney is providing those scientists with a sandbox of all the information AER has to help create those models. Once it’s developed, it will be incorporated into OneStop’s automated rules and risk management.

“It’s actually taking what they’re doing with science and embedding it into the operational process,” she says. “I’m not sure a lot of organizations are doing that really effectively today.”