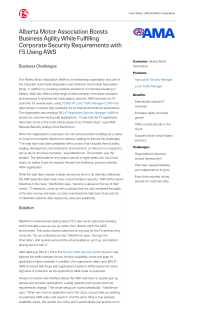 Alberta Motor Association (AMA) deployed an F5 solution in the AWS cloud that allowed the organization to speed the deployment process, decrease time to market, boost the efficiency of the web development team, and move the business forward -- all while supporting the strict security requirements of executive leadership.
Register Now

When the organization’s web team ran into some problems building out a series of virtual environments, MacKinnon called a meeting to discuss the challenges. “The web team had been presented with a project that included them building staging, development, and production environments, so they put in a request to set up about 40 virtual machines,” says MacKinnon. The problem was the timeline. The deliverable for the project was six to eight weeks out, but it took nearly six weeks to get the request through the traditional, process-oriented AMA organization.

While the web team needed a faster turnaround time to do their jobs effectively, the AMA executive team was more concerned about security. “With all the recent breaches in the news,” acKinnon says, “security is always at the top of their minds.” IT needed to come up with a solution that not only increased the agility of the fast-moving web team, but also maintained the high level of security for conﬁdential customer data required by executive leadership.