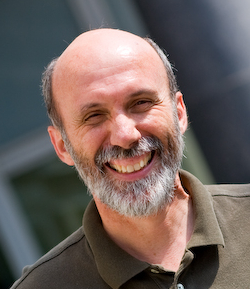 Be the first one to rate!
Hector Levesque received his BSc, MSc and PhD all from the University of Toronto in 1975, 1977, and 1981, respectively. After graduation, he accepted a position at the Fairchild Laboratory for Artificial Intelligence Research in Palo Alto, and then joined the faculty at the University of Toronto where he has remained since 1984. His research is in the area of knowledge representation and reasoning in artificial intelligence. On the representation side, he has worked on the formalization of a number of concepts pertaining to artificial and natural agents including belief, goals, intentions, ability, and the interaction between knowledge, perception and action. On the reasoning side, his research mainly concerns how automated reasoning can be kept computationally tractable, including the use of greedy local search methods. Hector Levesque has published over 60 research papers and three books. Four of these papers have won best paper awards of the American Association of Artificial Intelligence (AAAI) in 1984, 1984 again, 1992, and 2006, and two other papers won similar awards at other conferences. Two of the AAAI papers went on to receive Classic Paper awards of the AAAI, in 2004 and in 2011, and another one was given an honourable mention. In 2006, a paper written in 1990 was given the inaugural Influential Paper Award by the International Foundation of Autonomous Agents and Multi-Agent Systems. Hector Levesque was elected to the Executive Council of the AAAI, was a co-founder of the International Conference on Principles of Knowledge Representation and Reasoning, and is on the editorial board of five journals, including the journal Artificial Intelligence. In 2001, Hector Levesque was the Conference Chair of the International Joint Conference on Artificial Intelligence (IJCAI), and served as President of the Board of Trustees of IJCAI from 2001 to 2003. In 1985, Hector Levesque became the first non-American to receive the Computers and Thought Award given by IJCAI. He was the recipient of an E.W.R. Steacie Memorial Fellowship from the Natural Sciences and Engineering Research Council of Canada for 1990-91. He is a founding Fellow of the AAAI and was a Fellow of the Canadian Institute for Advanced Research from 1984 to 1995. He was elected to the Royal Society of Canada in 2006, and to the American Association for the Advancement of Science in 2011. In 2012, Hector Levesque received the Lifetime Achievement Award of the Canadian AI Association.

How to move past the hype to succeed with AI

How to move past the hype to succeed with AI