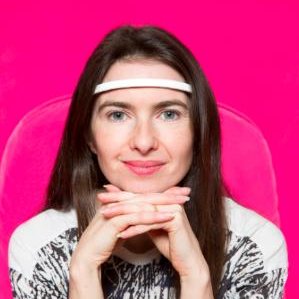 Be the first one to rate!
Ariel Garten is the Founder of InteraXon, makers of Muse: the brain sensing headband. Muse is the award-winning headband that makes meditation easier. During guided exercises, Muse senses your brain activity and sends that information to your phone or tablet, giving you real time audio feedback to help take the guesswork out of meditation. Ariel studied neuroscience at the University of Toronto and worked in labs at Toronto’s Krembil Neuroscience Centre researching Parkinson’s disease and hippocampal neurogenesis. No mere science nerd, Ariel is a fashion designer whose clothing opened Toronto Fashion Week in '03, and has had her work displayed at the Art Gallery of Ontario. Ariel’s uncommon combination of science and art is integral to the design of Muse and to InteraXon’s unique approach to brain sensing technology. Ariel was also a therapist in private practice. Having worked with BCI technology since 2003 in the lab of Dr. Steve Mann, Ariel recognized the opportunity to commercialize technology that would fundamentally disrupt multiple markets. She co-founded InteraXon to this end, in 2009. InteraXon debuted with the creation of "Bright Ideas"?, Ontario's feature showcase at the 2010 Winter Olympics, where visitors in Vancouver got to control the lights on the CN Tower, Niagara Falls and the Canadian Parliament buildings with their minds, from across the country. Ariel and her team are merging technology, neuroscience, art and design. Ariel and Muse: the brain sensing headband are regularly lauded in global media: CNN, Forbes, Popular Science, CNET, CNBC, VentureBeat, TechCrunch, Wall Street Journal Tech and more, for creating what Huffington Post calls "the beautiful headband that will make you smarter".

Muse / Interaxon, based in Toronto, Canada is a developer of engaging experiences using brainwave-sensing technology designed to help you free yourself from physical, emotional and mental obstacles so you get more out of every moment. Our mission is to enable you to live a happier, healthier and more connected life with leading brainwave technologies […]