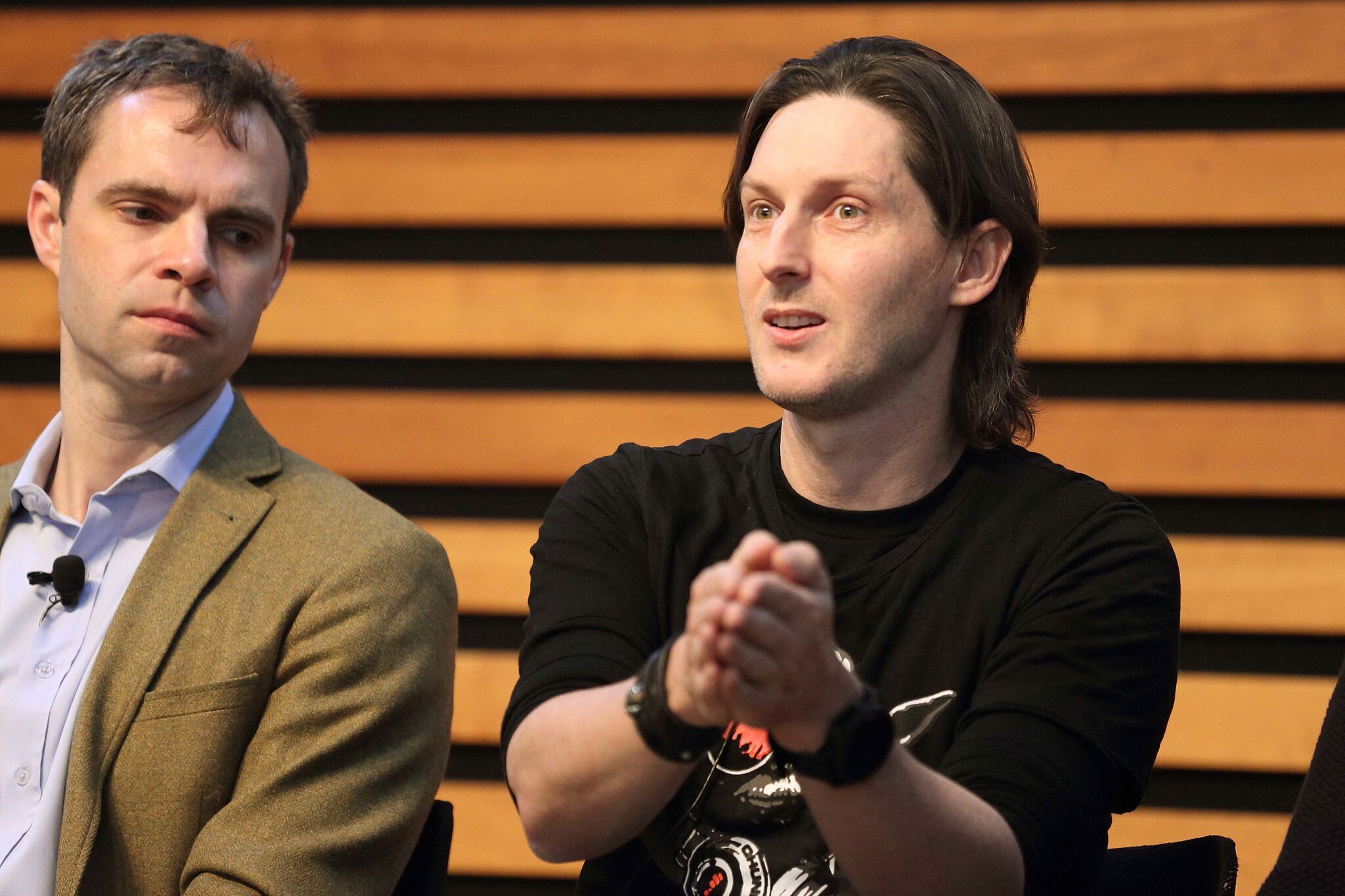 Artificial intelligence is no longer the stuff of science fiction. Glenn Gore, the chief architect of Amazon Web Services, travels the world talking about AI and how it’s being used – and how it will be used – by forward-facing organizations. In an interview with ITWC Writer Christine Wong, Gore provides a tantalizing glimpse of the future and offers advice about meeting head-on the changes the technology will inevitably bring to business and business and the workplace.

Artificial intelligence is everywhere these days.

It’s inside my son’s tablet, answering the questions he asks it out loud. It’s behind the wheel of autonomous cars so that, one day, we won’t have to be. It’s powering the chatbots that handle online customer queries at companies just like yours.

If AI is seemingly everywhere, so is one of its biggest enterprise advocates. Glenn Gore is an Aussie by birth but his job as chief solutions architect for Amazon Web Services (AWS) has him wandering the globe. His Twitter account could double as a travelogue.

“Heading back home after six weeks away,” reads one tweet. And another: “My Amazon Echo just realized she is now in the U.K. and changed her accent … Who would have thought I would miss Alexa’s U.S. accent?”

Gore’s own insights into all of this aren’t just global, they’re interplanetary. Besides taking on key engineering and R&D roles in projects with huge AWS clients like Facebook and Twitter, he’s led teams that helped NASA process and share images from its 2,000 lb. Mars rover. The U.S. space agency used AWS to stream 150 terabytes of data from the red planet back to thousands of smart devices here on earth, all within a few short hours.

Gore is also adept at framing highly technical concepts in an accessible, approachable way for enterprise organizations looking to apply them within their own businesses. No wonder he’s a popular speaker at conferences around the world. In 2017 alone, he shared his experience at tech events in Sydney, Berlin, Las Vegas, Munich, Toronto and the U.K., among others.

So why is a cloud architect crisscrossing the planet to talk about artificial intelligence?

“Cloud enables AI workload,” Gore explains. “You need the data to train the models, and the cloud enables customers to store mass amounts of data securely and reliably. The second aspect is, what’s the algorithm I wanna apply to the data? So cloud allows you to experiment with these algorithm models quickly and ascertain which model is right for your needs.”

AWS offers a stable of products for the enterprise AI market.

Amazon ML is a managed service for building machine learning models and generating predictions. There’s Lex, the company’s chatbot creation tool. Developers can use Amazon’s Polly framework to convert text to voice. As of a few weeks ago, Amazon’s Rekognition software can identify the faces of individuals and specific groups of people within large crowds.

Gore points out Amazon has been using ML – to learn the shopping preferences of its e-commerce customers, for example, and then suggest similar items they might want to check out on their way to the online checkout – for decades.

“After 20 years in the ML business, our algorithms are very battle tested in the real world,” he notes.

To me, the biggest benefits of AI are actually for people living with disabilities. It’ll have such a profound impact, in many ways, of removing disability from some people’s lives – Glenn Gore

As someone working so high up in a company with such a long AI track record, Gore is well placed to ponder the potential benefits of artificial intelligence.

“It’s giving us an even more natural way of interacting with computerized systems and it’s more personable for the end user,” he says of AI’s natural language processing and user-friendly interface. “To me, the biggest benefits of AI are actually for people living with disabilities. It’ll have such a profound impact, in many ways, of removing disability from some people’s lives.”

“There’s the rise of custom medicine. Your genes are very different than mine, so finding out which drug is the best for your genetic makeup will remove a lot of the costs from healthcare. The rise of green power and managing the grid in a smart way are also good for consumers as the cost of energy continues to rise.”

All very promising. What everyone really wants to know, of course, is whether AI will kill their job.

What about the jobs?

Thanks to the AI in autonomous cars, my eight-year-old probably won’t need a driver’s license in 10 years – but he will need a job. Will AI snatch that away from him?

Maybe, according to one early report. An infamous study put out almost two years ago by the World Economic Forum projected AI and automation would lead to a net loss of five million jobs worldwide by 2020.

Gore isn’t denying the tech will upset the apple cart. Yet he believes we still have time to hack that cart and divert it down a more fruitful path.

“We should be thinking about the impact of any change driven by technology. But the (job loss) timelines being put forward are aggressive and ignoring the fact that it often takes a lot longer to implement changes. That gives us time to figure out the education and relearning that’s needed.”

Gore also argues fear mongers are downplaying the fact that AI will actually create new jobs. As if on cue, a day after our interview, Gartner releases its own report, predicting AI will generate more jobs than it replaces by 2020 and create two million net new jobs by 2025.

Instead of fixating on jobs that are falling by the wayside, “we need to be better at imagining what the future can be with all these new roles,” Gore says. “Just to retrain the so-called five million (laid off) people, someone has to do that retraining. That alone creates jobs. And what’s the impact if you keep people doing repetitive tasks that are not good for their health or their sanity?”

A valid question. I pose another to Gore: how do we plan for the tumultuous changes AI will inevitably bring to business and the workplace?

If you’re a company, don’t treat AI as a standalone project. Gore suggests viewing it as something to be applied and integrated throughout each department, and every fiber, of your organization “just like security is.” In a blog post, he also recommends building a workplace culture where people at every level feel comfortable speaking out, pitching ideas, taking risks and owning up to their failures – with AI or any new initiative.

To my son, AI is all about talking to a tablet. How do I make sure he scores a job in tomorrow’s peak- or post-AI labour market? Surprisingly, adaptability may outrun ability.

“It’s more a set of attributes you want your child to learn,” says Gore, himself a parent. Instead of just advocating coding, he calls for kids to cultivate creativity, critical thinking and ultimately, flexibility.

“Your son,” he tells me, “is gonna have to be incredibly flexible because in his lifetime, he’s likely going to go through multiple generations of career changes. The more kids can understand the impact of the changes, the more successful they’re going to be. Gone are the days when they can learn one skill and have it carry them for the next 60 years.”

“Teach kids that change is good,” Gore says. “Ensure your kids are comfortable with change and even able to lead that change themselves.”

Maybe AI, like parenting an eight-year-old or speaking a second language, isn’t some finite thing to be mastered or perfected, but a challenge to be open to. Learn. Grapple. Adapt. Integrate. Create a new normal, with all the nuance and constant change and occasional failure and eventual awesomeness that brings.

Enjoy this? Read others in the What’s Possible series.

Christine Wong
Christine Wong has been an on-air reporter for a national daily show on Rogers TV and at High Tech TV, a weekly news magazine on CTV's Ottawa affiliate. She was also an associate producer at Report On Business Television (now called BNN) and CBC's The Hour With George Stroumboulopoulos. As an associate producer at Slice TV, she helped launch two national daily talk shows, The Mom Show and Three Takes. Recently, she was a Staff Writer at ITBusiness.ca and is now a freelance contributor.
Previous articleMyth busting: Seven reasons not to submit a Digital Transformation Award nomination
Next articleHow to build a culture of innovation and fearless change