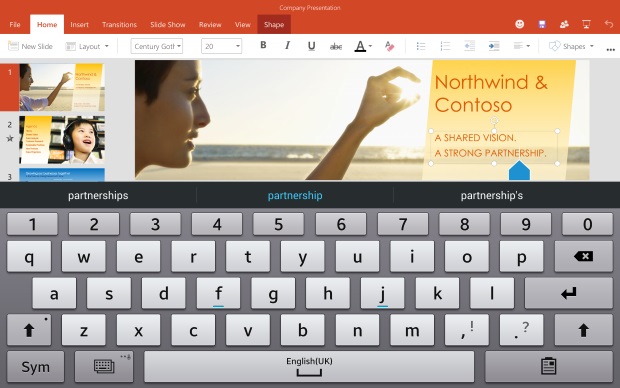 In the enterprise Apple iPads are often the tablet of choice, either by IT or staff. However, that may be changing. According to numbers released this week by IDC. tablet sales are slowing around the world– but iPad sales are slowing faster than Android tablets.

Which brings us to the upcoming release of Microsoft Office for Android. If more Android tablets may be appearing in enterprises, users may want access to a relatively full-featured productivity suite.

Andrew Cunningham at Ars Technica has put the preview version through an evaluation, including comparing to the iPad version and finds them pretty similar.

“Microsoft is much later to this game than it ought to be” he writes, “but it’s done a good job of deciding which features to include in a lighter, touch-optimized version of Office. The company implements those features in a way that doesn’t make the apps feel too cluttered.”

Note that the Android version of Office can do some things that the iOS version can’t, such as pulling data from and saving data to other apps and services. Where Office for iOS can only insert photos from your device’s Photos app, Cunningham says, Android’s Intents system will let you put in pictures stored locally or in cloud-based sources like Google Drive. When sharing documents, you can also save them to third-party services (other than Dropbox, which still has tighter native integration with the app).

It is important to remember that this is still a preview version that’s missing things, like the extra pay features in the iOS version. Microsoft says they will make the final release. But for Android tablet users who want something close to the capabilities of desktop Office, be patient.