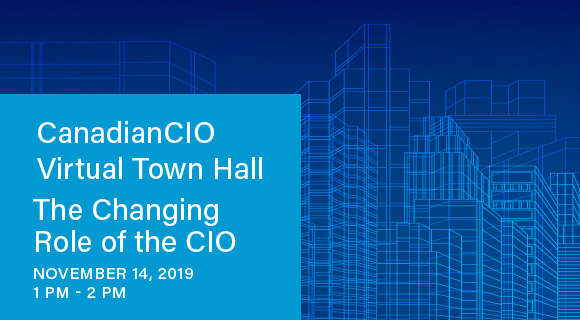 The role of the CIO is changing. What are Canada’s leading CIOs doing to keep up?

ITWC has invited the finalists for the 2019 ITAC CanadianCIO of the Year to share their thoughts in a one-hour virtual Town Hall moderated by ITWC’s CIO Jim Love and Managing Editor Alex Coop. The conversation will be limited to the finalists, but we’re letting YOU listen in.

The discussion with these leading thought leaders will be focused on these four key questions:

Join us November 14 to hear first-hand how today’s tech leaders are preparing for tomorrow’s challenges.

Can’t join us live? Register anyways and we will send you the on-demand recording to view at your own convenience.

Each year the ITAC CanadianCIO of the Year Award recognizes two top CIOs: one from the Private Sector and second from the Public Sector or a Not for Profit. The winners are selected based on nominations received and the deliberation of an independent panel of judges. The program is supported by ITAC and the CIO Association of Canada.

The awards will be presented during the Ingenious Awards on Wednesday, November 27th at the Omni King Edward Hotel in downtown Toronto. Learn more

ITWC webinars offer an interactive educational opportunity at no cost. Join us for insights and thought leadership that focus on the critical situations you are dealing with today. Our webinars are led by experts in their fields.

“The recent webinar was very clear and provided me with actionable information that I could use the very next day.”

- Webinar participant
Enter your information to register for this webinar as well as receive emails about other product and service offerings from ITWC (IT World Canada). * you may need to scroll up to see the registration confirmation