ACTA represents an attempt by a fewbusinesses using outdated business methods to try to find a wayaround Clayton Christensen's TheInnovator's Dilemma. They are doing this by lobbying forrules which will protect their existing business methods againstemerging businesses which might transform the economy and replace theold ways of doing things. In their lobbying they are manipulatinglanguage to suggest what they are asking for is very different thanwhat they are actually asking for, and they are trying to suggestthat activities are devastating and must be stopped if someone elsedoes something which the companies the lobbiests represent commonlydo themselves.

A simple dictionarydefinition of counterfeiting would be “made inimitation so as to be passed off fraudulently or deceptively asgenuine; not genuine; forged”. This is an offense against theperson that the passing off is being done to, in other words theaudience (ie: customer) of the forgery. It is not an offense againstthe origin of the forgery, and certainly not a copyright or patentholder. There are links to traditional trademark law which wascreated as a form of consumer protection (so that trademarks could beused to indicate to consumers something about the provider ofproducts and services), but the concept of trademark law has beenwarped to focus on the special interests of trademark holders overconsumers.

While the term “piracy”was manipulated over tens of years, the manipulation of the word”counterfeiting” is happening far more quickly. In Marchof this year the Wikipedia definition was changed from “Acounterfeit is an imitation (ie, a fake) made usually withthe intent to deceptively represent its content or origins, thusincreasing sales appeal due to the reputation of the imitatedproduct” to “Acounterfeit product is an imitation which infringes upon aproduction monopoly held by either a state or corporation”. While this was a radical rewriting of the meaning of the term,something that might normally become the subject of edit wars onWikipedia, this manipulated definition is still there today. Thissuggests how successful the special interest groups have been so farin completely rewriting the concept of counterfeiting in peoplesminds.

The term “counterfeiting”is now being used to reference any type of minor infringement of thetemporary government monopolies granted to holders of patents,copyrights, trademarks or any other related rights. Rather thanbeing seen as an offense against consumers, it has been transformedinto an offense allegedly committed by consumers.

If you don't know what ACTA isabout, I recommend you read some of the articles attached to the tagACTA on Michael Geist's blog. The short-form is that thetreaty is primarily about copyright and the Internet (the manipulatedmeaning of the word counterfeiting), and little if anything to dowith the traditional definition of counterfeiting.

There are Canadian proponentsof this type of policy and treaty, with the most visible beingLiberal MP Hon. Dan Mcteague (Pickering- Scarborough East). He has been a proponent of having an”IP and Anti-Counterfeiting Caucus” within parliament tofocus on these types of issues. This was a follow-up to hisparticipation on Industry Committee towards the tabling of anembarrassingly titled report Counterfeitingand Piracy are theft in June 2007. Many of the membersof that committee from 2007 are still in parliament (JamesRajotte was chair, Paule Brunelle and Dan McTeague were vice-chairs,and other members were André Arthur, Maurizio Bevilacqua, ScottBrison, Gerry Byrne, Colin Carrie, Brian Masse, Bev Shipley, Dave VanKesteren and Robert Vincent). While Brian Masse of the NDP hasspoken out against this policy direction, I have not seen indicationthat there was any significant dissent from any of the other membersof that committee.

When discussing the issuecommittee members have abused the traditional definition ofcounterfeit, talking about how public safety is compromised by peoplenot being able to be certain of the origins and thus quality of whatwe are consuming. Examples often given are pharmaceuticals, airplaneparts and children's toys.

If this were the type ofcounterfeiting we were actually talking about, there would be noopposition. In the case of Mr. Mcteague he has given speeches andco-lobbying with the recording industry (among others), making itobvious that he is not talking about the traditional definition ofcounterfeiting but the one that includes any minor infringement ofcopyright, patent and related rights.

There are two leakedprovisions of ACTA that are often highlighted.

One is the extension of thethe anti-circumvention provisions that we saw with the policylaundered via the USA's National Information Infrastructureimplementation bill, the 1996 WIPO treaties, and then the USA'sDigital Millennium Copyright Act (DMCA). ACTA will be a back-door toimposing the most controversial aspect of this policy laundering onany of the countries that move forward with it, such as Canada. Itwill render moot the consultations that recently happened.

This should make you wonderhow the Conservative government has been directing our”representatives” in the ACTA negotiations. While theywere claiming to Canadians that they want to be open and transparent,and have wide public consultations, they might have been whisperingthe opposite to their negotiators on this secretive treaty. Possiblyeven worse, if the Conservative cabinet has not been fully briefedand directing our “representatives”, then who is actuallyin charge of this critical economic policy in Canada?

The second provision discussedis graduated response, also known as the “three strikes”rule. This is where Internet providers will be forced to terminatethe connections of citizens accused three times (without requiringproof) of infringement.

These provisions areembarrassing to even talk about. With excessively high statutorydamages in Canada, the reality for most Canadian citizens is wealready have a “one proven strike” and you are out. Beingable to have an Internet connection will be the least of concerns forpeople whose families would be bankrupted by either the out of courtsettlement with the copyright holders or the court fees plusstatutory damages if they go to court to defend themselves.

As I included in mysubmission to the 2009 Copyright consultation, this minorform of infringement is sometimes beneficial to the copyright holder. In 2007Jeff Raikes, then President of the Microsoft BusinessDivision , said “If they're going to pirate somebody, we want itto be us rather than somebody else”. This is a recognition thatwhile being directly compensated for a use of a copyrighted work isideal, that infringement is better for the copyright holder thanpeople switching to alternatives.

A far more serious form ofcopyright infringement is when a corporation, many that include stafflawyers who should be expected to know better, infringe copyright andcommercially redistribute someone elses work without permission. Asone example, yesterday I read Microsoftpulls Windows 7 download tool where Microsoft was yet againaccused of commercial copyright infringement.

We should simply refer to thisas “strike one”, and be done with it.

While Microsoft is just onecompany, they are easily accused of copyright infringement more than3 times in any given month. If it were not for that fact thatnearly every so-called “3 strikes” law were bogus,companies such as Microsoft would not be allowed to have an Internetconnection (No more Bing, no more Windows or Office update or evendevelopment/testing of any of their Internet products, no moreHotmail, etc).

It isn't as if Microsoft isalone. Brad M. Kuhn, the tech director at the Software FreedomLaw Center, bloggedon Sunday that, “Since 21 August 2009, I've beenfinding one new GPL violating company per day (on average) and I amstill on target to find one per day for 365 days straight.”

The terms of the GPL areclearly aimed at commercial companies, given the license alreadygrants everything a private citizen would ever want which is tolegally redistribute the unmodified software for free to anyone theywant, and for any recipient to use the software for free. This meansthat all of these potential GPL violations are commercial violationsthat are far more serious than anything a private citizen would do. This type of infringement is far less forgivable given companiescommercially redistributing copyrighted works should be expected tohire lawyers to understand the relevant legal contracts and licenseagreements, while citizens shouldn't be expected to.

Brad clearly states that hebelieves that these are largely unintentional and not malicious. What I'm trying to say here isn't that habitual copyright infringerslike Microsoft shouldn't be allowed to have an Internet connection,but that we should be very quickly fully rejecting “3 strikes”or even “notice and take-down” proposals for non-commercialinfringement. If we shouldn't be considering commercial copyrightinfringement as a serious offense with serious consequences, whyshould we be treating non-commercial copyright infringement asanything more than a far lesser offense with far lesser consequences?

As embarrassing as these typesof rules should be to those that suggest or support them, they aresomehow moving forward in a few countries and being embedded in a fewtreaties. Please get in touch with your elected representatives andtry to wake them up from the snooze they appear to be in.

For those members ofparliament that may be proponents of this type of policy, we shouldall do anything we can to help ensure that they are not members ofparliament after the next election. We have said goodbye and goodriddance to Sheila Copps and Sam Bulte, and there is clearly stillsome house (of commons) cleaning required. 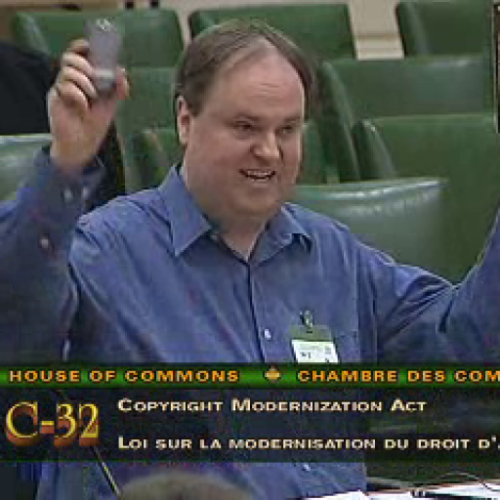