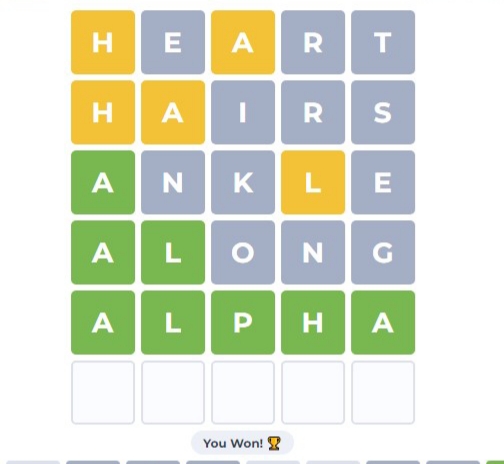 The free online game, Wordle – code written by a software engineer in his spare time – has people filling up my Facebook feed with their results. Now, the New York Times has bought it, and I think all programmers should note the payday.

Wordle is a game that asks you to guess a five letter word. It gives you 6 tries, and feedback on each guess using colour codes to tell you which letters are correct and if they are in the right or wrong place. The original version only lets you play once a day. The creator, Josh Wardle, thought this limit was what got people intrigued.

“Wordle continues to be a free-to-play game that can be accessed on any browser, from any platform. The creator has announced his plans to not monetize the game in any way, but this didn’t stop a number of developers from blatantly copying the game’s core elements into their own apps and games.”

As programmers, we know some coders do not mind when other people use their code; we even encourage it at times. Josh Wardle released the code with NO commercial ads or connections so it would be free to use. But the copycats do not seem to be honouring this intention. There is one app that Indian Express reports has permission from Wardle to charge, as long as they give the money to a charity. I think it is important that we support Wardle’s right to ask this and his copyright ownership even if he is giving it away as free to use.

On behalf of ourselves, our fellow programmers, and our professional association (CIPS), we should support programmers being paid a fair price for their work. In this case, it is very hard to determine what would be fair, but social media rates for followers and users would clearly apply.

The game has clearly gone viral. The number of users makes it much more valuable than just the original code might have been. If marketing techniques had been used to make this happen, the marketing would become a classic case study. But the New York Times is not buying a marketing method; just code copyright and, by extension, existing users.

The Times reported, as of February:

“Wordle was acquired from its creator, Josh Wardle, a software engineer in Brooklyn, for a price “in the low seven figures,” The Times said. The company said the game would initially remain free to new and existing players.”

Despite these assurances, players worry the game will be monetized, by means including: being placed behind a paywall, selling player data, incorporating a subscription plan to play, adding ads, selling additional guesses, or incorporating other in-app purchases.

Credit goes to the New York Times for the ethics to pay a considerable price to purchase a game which was, and remains as of publication, free to play. We can only hope they will continue to take the high road, and keep the fun available to all.