At the recent Collision from Home virtual conference, Stephen Deasy, the Head of Engineering at Atlassian, explored the issues that affect scaling software development. Atlassian is a well-known supplier of software development tools including Jira and Trello. He said that “As you scale your software development, you will encounter various dysfunctional patterns such as, too many meetings, a push to add another person to the development team or creating a design that mirrors your org chart. Position your projects for productive success by keeping teams small, developing junior people, and adding entirely new teams when necessary.”

Scaling software development is not straight forward. Most non-IT managers intuitively think that simply adding more capacity, meaning people, will produce more software with no adverse impacts on unit costs or quality. After all, that’s been the long-standing experience with other functions like production, transportation, or warehousing. Unfortunately, this experience is not relevant and even dangerous when applied to software development.

Stephen Deasy reminded his audience of some historical perspectives related to the problem of scaling software development that continue to be valid and relevant in today’s software world.

Related
Software developers are in high demand, according to ITWC’s Salary Calculator data

In 1967 Melvin E. Conway, a computer programmer, stated that “Any organization that designs a system will produce a design whose structure is a copy of the organization’s communication structure”.
Common failures in project organization and software architecture that arise from Conway’s Law include:

Related
Are your apps duds?

In the 1990s British anthropologist Robin Dunbar proposed that there is a “cognitive limit to the number of people with whom one can maintain stable social relationships—relationships in which an individual knows who each person is and how each person relates to every other person.”

Dunbar proposed that humans can comfortably maintain up to 150 stable relationships. Therefore, a typical person might have up to:

This observation about the human cognitive limit also limits the number concepts or variables even a talented software developer can juggle in their mind at one time. This limit should consciously influence the complexity of the proposed architecture of the system. The project team should favor designs that consist of a larger number of smaller, crisply defined modules over designs that consist of a smaller number of larger, more complex modules.

Related
Don’t want your IT project to fail? Check your ego at the door

Fred Brooks, the world’s first computer architect and a software engineer, first published The Mythical Man-Month in 1975. The book’s central theme is that “adding manpower to a late software project makes it later”.
This observation is true because software development projects cannot be perfectly partitioned into truly discrete tasks that can be worked on independently by software developers. By contrast, the manufacture of widgets or the transportation of materials or finished goods by multiple trucks or railcars are independent tasks.

All software projects require fairly constant communication among the software developers to build software modules and database schemas that can successfully interact with each other. Therefore, assigning more programmers to a project running behind schedule will make it even later. This is because the time required for:

This table of example team sizes illustrates how the number of communication channels and therefore the communication effort grow exponentially by team size. In this example, each team member devotes only 1 hour to communicate with each channel or team member in a 40-hour workweek. 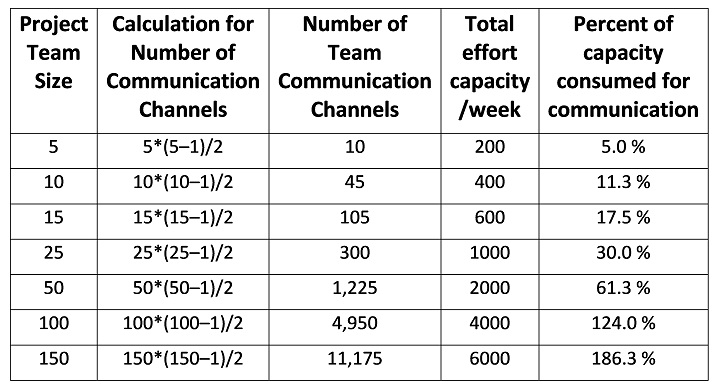 What strategies would you recommend that can scale software development successfully? Let us know in the comments below.