An early look at the responses coming in for ITWC’s 2019 CanadianCIO Census shows some good news – budget increases look higher than in previous years and more efforts are being made on digital transformation.

Its the sixth year of the annual effort to survey Canadian CIOs and ITWC wants more CIOs to contribute their responses. The survey is an important way to check the hype – as so-called trends are tested against real survey data. It’s also a rare opportunity to examine what distinguishes CIOs in the Great White North independently from their American peers.

Tracking the IT opinions, decisions, and aspirations of Canadian CIOs for six years has revealed some fascinating trends that will be further explored this year. The executive role is changing from one that is responsible for merely “keeping the lights on” in the server room to a crucial strategic advisor at the CEO’s side. As technology proves to be a disruptive factor in every industry, CIOs are being asked to help businesses transform their go-to-market approach and improve the customer experience.

An early peek at the census data shows that more CIOs are being given increased budgets to pursue that mission. Out of the answers submitted so far, one-quarter say they are increasing budgets between five and 14 per cent.

Above is a bar graph showing this year’s responses so far. Below shows census results from previous years. It looks like we’re on track for a slight increase in budget allocated for “transform” activities, and about the same for growing and running the business. 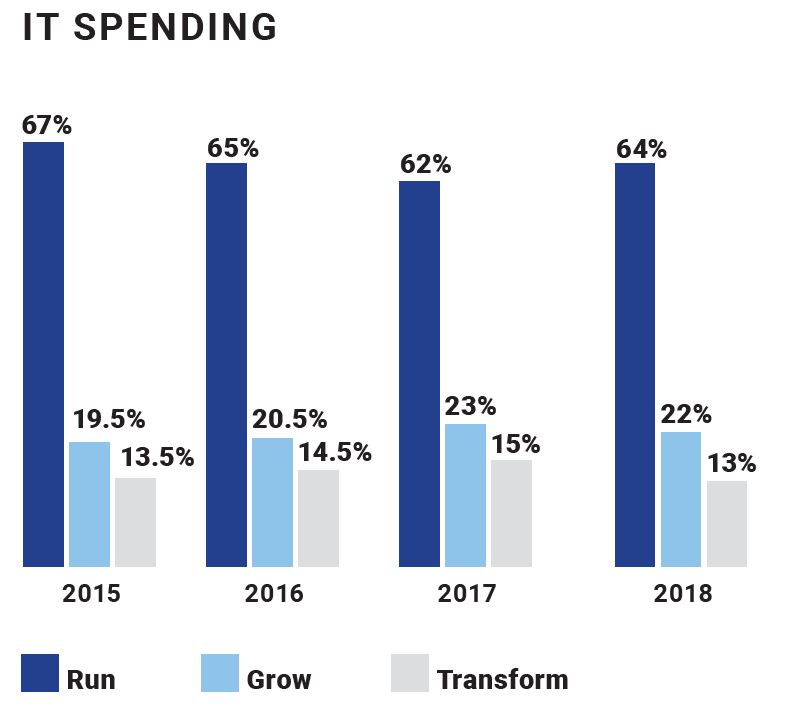 So, with more money to spend on digital transformation efforts, what is actually working? “These people have been successful at getting investment,” Love says. “We watch where the budget numbers fall against their behaviours.”

One correlation the survey brings to light is that increased spending on digital transformation leads to more budget overall. Investing in public cloud usage has been one aspect of that digital transformation spending. Last year, the census showed that cloud was becoming the go-to strategy for applications and infrastructure. CIOs seek benefits such as reduced time spent on infrastructure maintenance and an increased ability to focus on the core business.

This year, the census is doing a deeper dive on public cloud investment, looking at which hyperscaler is the most popular for usage. Here’s an early look at that data, which shows Microsoft Azure with a big lead, followed by Amazon Web Services. It’s interesting to see that such a large portion are using another public cloud provider outside of the biggest brands.

The data also aligns with CDN’s Top 100 Solution Providers survey of partners, which revealed Microsoft Azure as the most popular public cloud option to partner within the channel community.

Does this early look at a couple of the census data points reflect your experience as CIO? Contribute to the survey and let ITWC know. Every completed survey helps to improve our understanding of the story of the CanadianCIO.

“CIOs are regarded as much more strategic. We’re no longer Dr. No,” Love says. “The CIO is no longer the plumber, they are the strategic partner that’s guiding the technology and not managing it at the micro-level.”

Survey participants receive a copy of the completed CanadianCIO Census 2019 and an opportunity to walk through the data with Love in a webinar.

Alex Coophttp://www.itwc.ca
Editorial director for IT World Canada and its sister publications, and former community reporter. Also a great pick up basketball player | acoop@itwc.ca
Previous articleCyber Security Today: Criminal online network smashed, watch out for this Microsoft scam and return this key
Next articleAudits, uncertainty, and paperwork: The bureaucratic burden of SR&ED