Canadian developers are hungry for better AI tools, are more opposed to recent net neutrality changes than even Americans are, and some may have to do more to prepare for Europe’s new privacy regulations.

Cloud provider DigitalOcean released its quarterly survey for Q1 2018 on March 22, but the segmented Canadian data has been segmented out exclusively for IT World Canada. The survey is wide-reaching and asks developers to weigh in on a number of topical issues in the industry, from AI and machine learning, to the European Union Global Data Protection Regulation (GDPR), to the repeal of net neutrality in the U.S., and other methods around developer work. DigitalOcean surveyed 5,993 developers, students and IT workers worldwide, of which 209 were Canadian.

Let’s explore some of the survey responses with the help of Toronto-based developer Macy Kuang, game programmer at Miaomiao Games.

Almost three-quarters of Canadian developers are not yet using artificial intelligence (AI) or machine learning tools, but an almost equal number are keen to learn more about them. Canadians are most excited about automated machine learning (about half said so), or sentiment analysis and natural language processing (22 per cent).

For the developers that have used AI, the most popular AI solution was Google’s TensorFlow, with 11 per cent of all Canadian developers having used it. IBM Watson was the next most popular tool at seven per cent, followed by Micrososft Azure at three per cent.

“We have a fast-aging society and I believe AI and automation is the only solution to fill the missing work force in the near future,” Kuang says.

With the May 25 deadline for GDPR fast approaching, some Canadian firms might face some compliance problems if they don’t act quickly.

With the E.U. tightening up regulatory restrictions, other parts of the world might start to look more appealing to developers, Kuang suggests. “We are more flexible than ever, we can easily move to a different country and serve different customers.”

Only 15 per cent of Canadian developers say they are preparing for GDPR. Of course, many Canadian companies don’t operate in Europe. According to the survey, 78 per cent of developers don’t handle the data of E.U. citizens. That would exempt them from the requirements imposed. 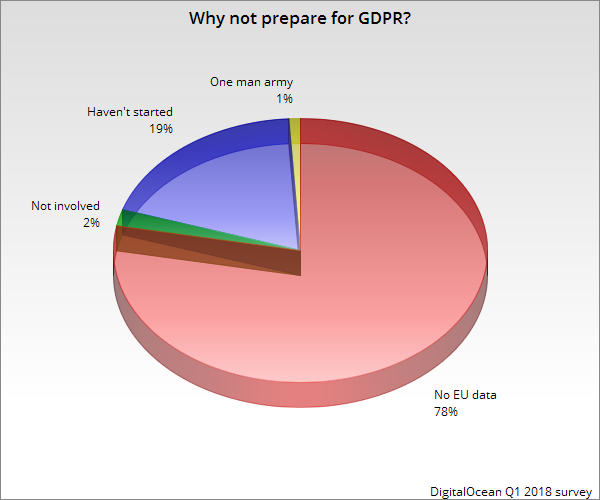 Despite the fact the U.S. Federal Trade Commission’s recent change in stance on net neutrality (which changed the regulatory body responsible for overseeing Internet services) only has jurisdiction south of the border, many Canadian developers are worried about it.

Kuang counts herself among those in favour of net neutrality.

“If only large businesses can pay off ISPs to get fast access, it means that startups are going to have a very difficult time to compete,” she says. “Net neutrality gives every business a level playing field.”

Almost half of Canadian developers feel the change will affect their work. Of those that do think so, they feel their ability to compete with established players will be hurt (40 per cent) or they will face increased technical and business expenses (30 per cent). Clearly many Canadian developers have ambitions on launching services to the U.S., and feel that the new regulatory environment is less in their favour than it was last year.

Security and approaches to work

The survey touches on a few other points with Canadian developers that examine their response to a major security flaw and workflow methodology.

First off, only 30 per cent of Canadian developers say they were affected by the Spectre / Meltdown flaw discovered in CPUs right at the beginning of 2017. Of those affected, ost spent less than 10 hours of work related to the issue.

The survey also checks on how many developers are adopting certain agile techniques. More Canadian developers are using continuous integration (57 per cent) than continuous delivery (42 per cent), which is on par with the global average. Half of those who don’t use either method yet say they plan to adopt them eventually.

Developers were also asked the question “what is the biggest advantage of open source?” but were not asked if they sought to use open source tools or code. They also weren’t asked about the disadvantages of open source.

Canadian developers said that an increased sense of community (32 per cent) improved code quality (26 per cent), as well as faster delivery of software (25 per cent), were the top benefits of open source.