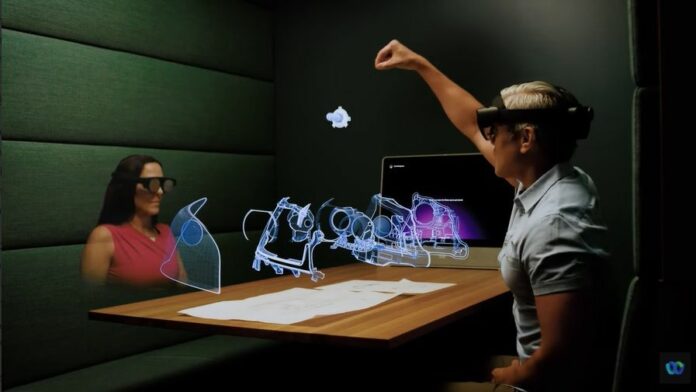 Holograms have previously been mainly restricted to the sci-fi scene, but now that Cisco is introducing them into Webex, they are indeed on the cusp of moving into the real world.

At a recent presentation held at Cisco Toronto’s Innovation Lab, a group of media experienced the Webex Hologram in action, as work on the product continues to the point where there will be a full-fledged launch that delivers what the company describes as “photorealistic, real-time holograms of actual people.”

Aruna Ravichandran, senior vice president and chief marketing officer of Webex, said that “with this particular technology, we now have the ability to basically hologram a live person in regardless of where they are located on the planet. It’s not an avatar, you actually see a live person.”

“Take an auto manufacturer, for instance. Participants can interact with a physical prototype of a vehicle that’s shared in the AR experience to examine and provide feedback on the vehicle’s engine and undercarriage. Design renderings of the car and other digital content can also be shared during the immersive experience.”

Compatible with augmented reality (AR) headsets Magic Leap 2.0 (expected to have a price tag exceeding US$2,295 once released this year), and Microsoft HoloLens2, with pricing starting at C$4,749, the demonstration was conducted using the latter, and involved Yung Hung, Webex technical marketing engineer based in Raleigh, N.C. interacting and unveiling a series of 3D exercises.

“We can bring in any physical object and it becomes part of the hologram,” he said during a live session with three journalists.

He demonstrated this by swirling water in a glass, and interacting with training aids, a CAD version of a Webex booth at a conference, a physical book, and a yellow car which one person can view from the front while someone else views it from the rear.

When asked if she sees use cases for normal business cases that don’t involve conducting surgery on a knee or looking underneath the hood of a car, Edel Joyce, the lead product manager of Webex Hologram, said “everyone does some sort of training” and the key is to make an individual feel engaged and not bored, while any training session takes place.

“We all fall into the habit of being on calls and doing a bit of this – ‘I’m listening, I really am I promise, but I am multitasking.’  And that’s normal behavior. And we can do that for certain meetings. But if you paid for a trainer, you want the person to feel engaged, you want that differentiated experience.”

Another example would be to use it to welcome a new employee working remotely, not via a Zoom call, but via an AR experience.

“There is a real nice onboarding use case,” she said.

The preview unveiling of Webex Hologram by Cisco Systems Inc. in late October 2021 included an announcement from McLaren Racing of it plans to not only test it, but have its design engineers, drivers, and crews actually use it throughout the current F1 racing season and beyond.

Zak Brown, chief executive officer of the team, said that “rather than flying a technician to the racing team or explaining procedures through flat images, with the Hologram technology we can immediately show an engine component from every angle, convey sizing, and instruct on assembly and usage as if they were in person – all while saving countless hours in travel time.”

The point of it all was to introduce not only a strategy, but an actual product, which Cisco described as a meeting offering that takes advantage of AR headsets to combine Webex meeting functionality with 3D holograms.

Aside from McLaren, other early adopters, include government agencies, healthcare companies, and hardware manufacturers.

In terms of pricing and availability, Cisco Canada said in a statement that “Webex Hologram is still in its early stages and is being piloted with a group of customers. As for now there is no information on availability dates.”

As for the overall infrastructure that creates the holograms, Cisco described it as an “in-house built product,” adding that more information about the actual hardware will be released “closer to the release date, which has not been announced yet.”

Paul Barker
Paul Barker is the founder of PBC Communications, an independent writing firm that specializes in freelance journalism. His work has appeared in a number of technology magazines and online with the subject matter ranging from cybersecurity issues and the evolving world of edge computing to information management and artificial intelligence advances.
Previous articleBroadcom blog on VMware development plans panned by analyst
Next articleCoffee Briefing July 5, 2022 – Avanade expands into Atlantic Canada; Toronto fintech helps Pride Toronto raise money; Snowflake to hire engineers across Canada; and more