Google Home not available in Canada, but works like it is

Google Inc. announced that its Google Home speakers were officially launched in the U.K. April 6, but Canada is still waiting.

The search giant has promised 2017 access to the smart speaker hardware dedicated to its Assistant AI, and competitor to Amazon’s Alexa.

But that doesn’t mean you can’t order it and use it today. That’s what I did, ordering two units from B&H Photo, which offered shipping to Canada. The devices were at my condo three days after I placed my order and I spent the weekend setting them up. I was pleased to find that all of the connectivity that you’d expect to work with Google Home is intact in Canada. Even the services that require localization work seamlessly. There’s a few differences that I found may differ from the U.S. or the U.K. where the device is officially supported, but easily 90 per cent of the functions you’d want to use with the device are available in Canada.

Before purchasing Google Home, I did my research online and talked to a friend that owned both devices. My understanding is that while Google Home is newer to the market and hasn’t received as much developer support as Alexa, it performs better at handling more natural language requests. Also, I’ve seen firsthand that Alexa units in Canada won’t offer localization services without some extra work on the part of the user. For example, you can’t just say “Alexa, what’s the weather?” to get a report in Toronto. You’d have to ask “Alexa, what is the weather in Toronto?”

I purchased two units so I could have both voice access and synchronous audio playback in both my bedroom and my main living space. Setting up Google Home is very simple. You just have to plug it into the wall and use the Google Home app on Android or iOS to connect it to your WiFi network. You’ll also want to choose what Google account you use to personalize your experience with. If you have multiple accounts, consider carefully which one you want to use with Google Home as the smart assistant will be able to access other Google services you use, such as your calendar and your photos.

If you’re setting up more than one Home unit, or you have any Chromecast devices connected to TVs and speakers in your home, the next thing you’ll want to do is create groups. Groups allow you to play one audio source across multiple devices in sync. You can name the groups whatever you want, and then you can tell the Google Assistant to play media on those groups or perform other functions, like set a timer or alarm.

My set up involves two Google Home units, which I named “Bedroom” and “Kitchen.” I also have a Chromecast Audio connected to my main entertainment centre speakers, which I named “Media Centre” and a Chromecast Ultra that I call “Bedroom TV.” After my devices were set up, I made two groups – one called “Home group” that is literally the two Google Home speakers, and one called “All speakers” that includes both Home units and the media centre. So yes, you can have one device in multiple different groups.

When I want to use the groups, I would just say something like “Hey Google play music on home group.”

One more note here is that you don’t have to worry too much about where you place your Home units. I found the far-field voice recognition worked really effectively. I could shout at it from the balcony, or speak to it from across the room at a normal volume and it picks it up perfectly. So don’t feel like it has to be in a glaringly central place that clashes with your Feng Shui.

What it does and what works in Canada

First of all, Google Home is a smart speaker. It connects with Spotify or Google Play Music to play songs that you request. You can ask for a specific artist or song, or a playlist that you have saved. Or if you just want generic “piano music” or “party music” it can find that for you too. It also plays any radio station you request by specific frequency via TuneIn. So you just have to say “play 99.1 FM” to hear CBC Radio One in Toronto, for example. This all works fine in Canada.

You can also get traffic updates and weather updates from Google Home. I found this worked just fine as well. While it at first defaulted to telling me the temperature in Fahrenheit, I was able to change my preferences to Celsius in the Google Home app. You can also ask for nearby restaurants or stores, and for specific information about them like hours and phone number.

The regular features that don’t require any localization work fine as well. You can set an alarm, start a timer, or add an item to your shopping list. (Note: Just today, Google changed the shopping list from being stored in Google Keep to natively stored in the Google Home app.)

Because Google Home is not officially supported in Canada, there’s some services that just don’t work. For example, you can’t do any shopping by voice yet. I don’t consider that a huge drawback, despite Amazon’s commercials trying to convince me otherwise, I can’t really imagine a good use case scenario for wanting to buy something and have it shipped to me.

There’s a feature where you can ask Google to “play the news” or include a news briefing in a daily update that you can trigger when you say “good morning.” But I can’t get Canadian news services like CBC or Sportsnet to work with this feature. Even when I add them under news sources in the Home app, they just don’t play. But playing U.S. news sources works fine. Also, you could ask Google Home to play a specific Canadian news podcast and that works.

Also, I noticed in a Reddit forum that Google Home appears to have just pushed out multi-user support (personalization for more than one Google account), and I can see no sign of that from my Google Home app.

Still, there are tantalizing signs of localization within the Google Home app. There are Canadian examples given for the different questions that you can ask it. (Eg. “How far away is Vancouver?”) Also, I asked Google who Canada’s current Prime Minister is and what year the country was founded and the Assistant passed the test. It also plays the sound of a moose on command. 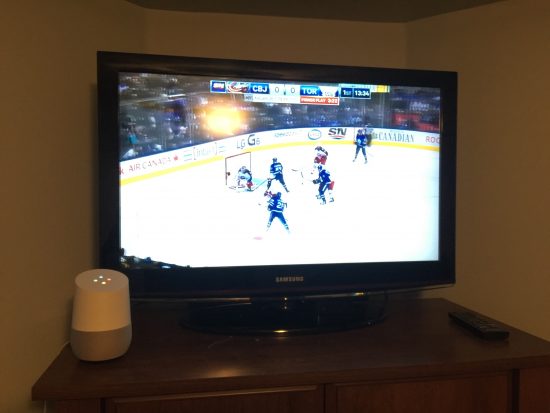 Half the fun of setting up Google Home and test it out is seeing what requests it can handle. I was often pleasantly surprised at how well Google’s Assistant can cope with. Here’s just a few awesome discoveries I made over the weekend with it:

After discovering that Google Home won’t add new events to my calendar or save reminders for later, I sought a solution using If This Then That (IFTTT). The service, if you’re not familiar, allows you to do simple programming with a graphical interface to link together different online accounts. Google offers “If” functionality for Assistant, meaning that you can use it to trigger other actions that link up with IFTTT.

I created several scripts that I thought were pretty useful:

I’ve yet to connect Google Home to smart home elements like an outlet, light switch, or light bulb. Based on research I’ve ordered some TP-Link gear that I anticipate will play along with my voice commands. I want to avoid buying a bridge or smart home hub because I feel like that’s too much technological abstraction for something like turning a light on and off. TP-Link’s gear should be able to connect directly with my router and be controlled with Google Home.

Recommended for you
Artificial Intelligence

Why letting Alexa spy on everything you say could be good...