Toronto is Canada’s top city for IT skills, Calgary most expensive

Canada’s tech sector employment has surged by almost 25 per cent in the past five years and some of its biggest urban cities and their surrounding areas are the best places to find that new tech talent, according to a new report.

Toronto, Vancouver, Ottawa, Montreal, and Calgary are the top five cities for tech talent, according to a study conducted by the Canadian division of Los Angeles-based real estate and investment services firm CBRE Group Inc.  But some smaller, yet fast-growing markets like Waterloo are attracting new employers to set up shop because of lower costs to access that talent.

Here’s the complete top 10 list from CBRE, which ranks cities based on 13 metrics that include talent supply, growth, concentration, cost, completed degrees, industry outlook for job growth, and market outlook for both office and apartment rent cost growth.

In the five years of somewhat muted economic growth overall recovering from the global recession, Canada’s tech sector looks to be a bright spot. Nine out of  the top 10 Canadian markets recorded growth in tech jobs, eight of which was in the double-digits, CBRE says.

Attend Technicity: ITWC and the City of Toronto invite you to face the digital future

Beyond established markets like Toronto and Vancouver, growth of markets like London and Waterloo, Ont. show that companies are eagerly starting to set up shop in some lower cost markets as well. Not only is real estate less expensive there, but so is the talent compared to many of the big cities. Since tech workers cost on average 45 per cent more than non-tech workers in Canada, bringing home an average of $83,000  per year, it’s no wonder that some firms are targeting cities where labour comes a bit cheaper.

Here’s CBRE’s top 10 list for costs of a typical tech firm in Canada, based on a 75,000 square-foot office lease and salaries of 500 employees:

Waterloo, Halifax, and Winnipeg are showing the highest rates of tech job growth and are on the bottom half of this list, CBRE points out. Calgary’s costs are expected to come down if the energy market continues to decline.

On an international scope, Canada’s tech hubs are low cost by comparison. For example, Toronto and Vancouver rank 49 and 50 respectively on the most expensive markets in North America. Thanks in part to a lower Canadian dollar right now, that could encourage more American firms to set up shop north of the 69th parallel.

Here’s a more in-depth look at Toronto’s tech talent metrics from the CBRE report (click for a larger image): 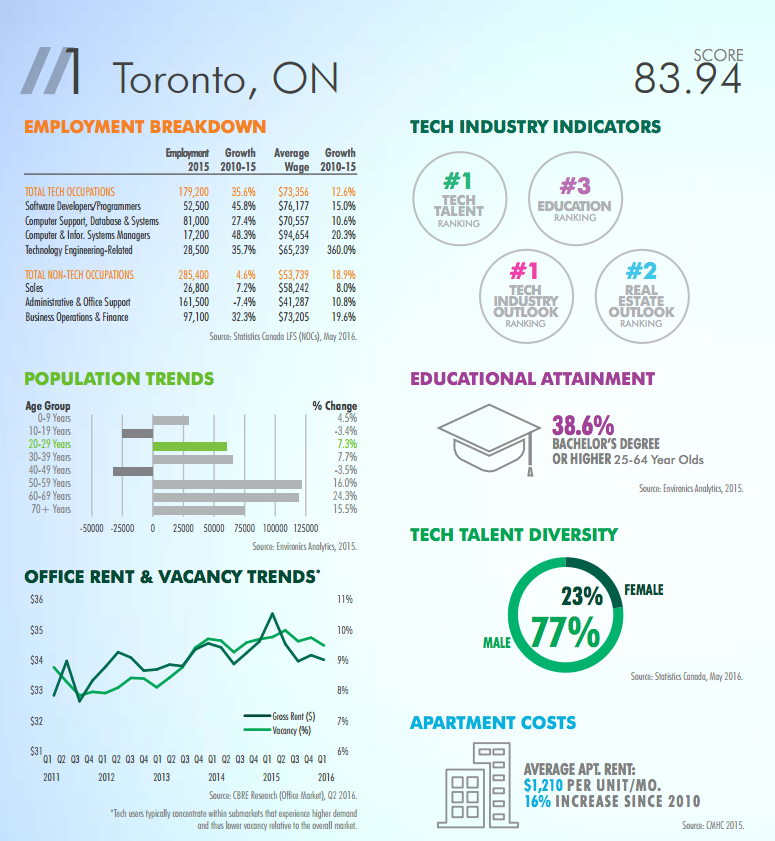