The blockchain future Don Tapscott wants for his grandchildren 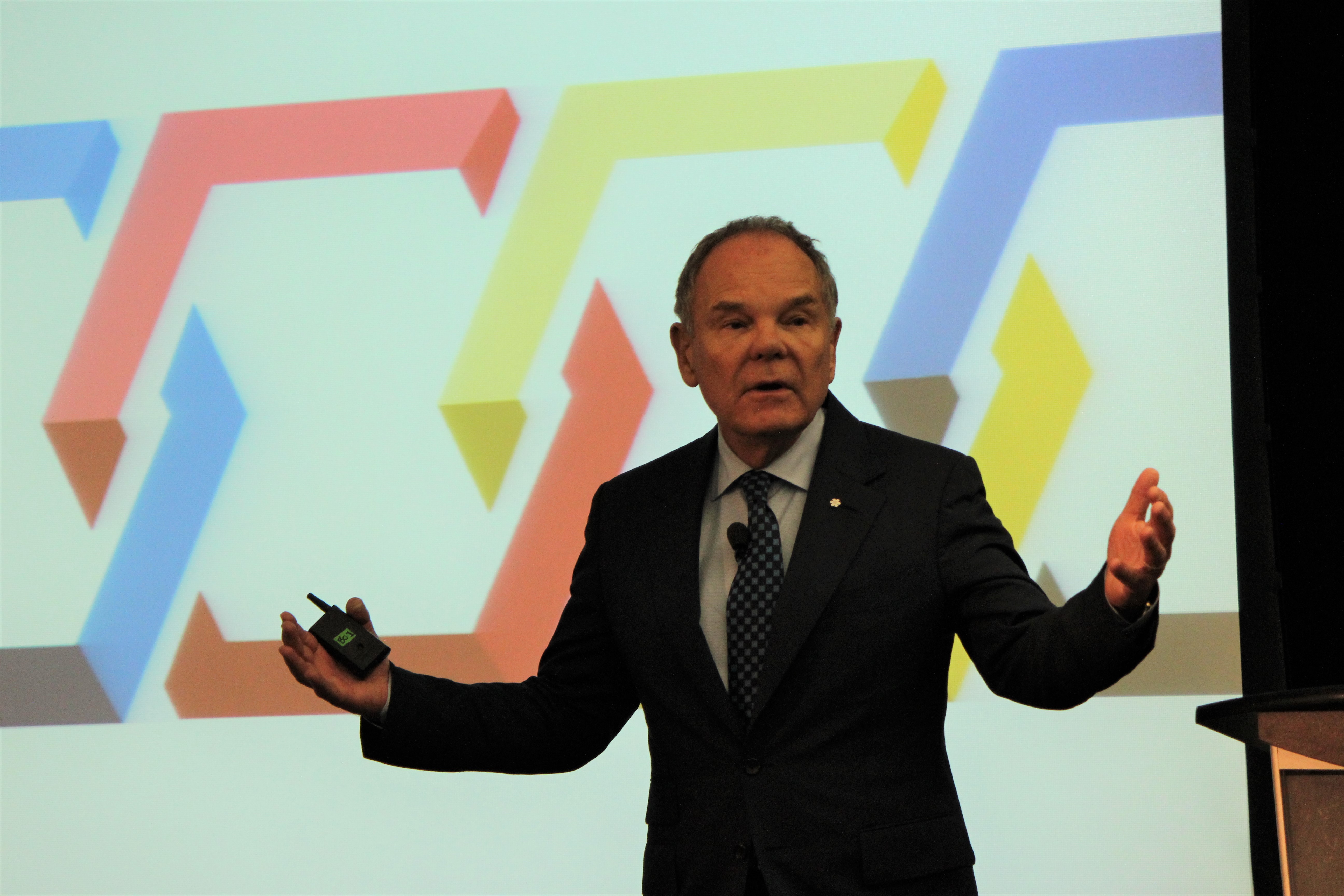 In the 12 hours before taking the stage to deliver his keynote speech at the CIO Peer Forum in Toronto, author and Blockchain Research Institute co-founder Don Tapscott learned of two new grand-children brought into the world. And they weren’t twins.

Tapscott’s son Alex (the other co-founder of the BRI and co-author of The Blockchain Revolution) and daughter-in-law Amy brought a new baby girl into the world. Then it was Tapscott’s daughter Nikki and her husband James with a baby boy.

“I had two grandchildren from two different kids born within 12 hours of each other,” Tapscott says in an interview. “It’s the most overwhelming, mind-boggling joyous thing that’s ever occurred to me.”

So how will blockchain make an impact on the lives of Tapscott’s newborn grand-kids? If Don had his wish, by the time they’re 18, they will own their own data and be masters of their own identity. They’ll trust democratic institutions that work from transparent platforms. And they’ll be part of an economy that includes everyone – including the 2 billion “unbanked” at present – and ensures that creators are fairly compensated for the value they produce.

In other words, the world has a lot of changes to make by 2037. Because that doesn’t sound much like life in 2019.

“The social contract you have is breaking down,” Tapscott says. “We have a bifurcation of wealth. Our democratic institutions are in deep trouble. Get ready for structural unemployment as entire sectors of the economy are wiped out by AI and blockchain… there are many other big intractable problems that this technology can help us solve.”

Tapscott is the first to say that technology isn’t a panacea, and that’s the case with blockchain too. People will need to work hard to find a way to create the world he wants to see his grandchildren live in (Don also has another 18-month-old granddaughter). But he sees blockchain as a good tool to help us get there, and he has some answers for those more skeptical.

When it comes time to vote on Oct. 21 in the federal election, Canadians will do the same thing they’ve done for generations – walk to a poll and make their mark on a sheet of paper. But Tapscott and his son Alex hope voting might move online in the near future.

Alex was a board member of the Elections Canada Advisory Board until 2018. In January 2016, he gave a presentation about using blockchain in online voting. Its decentralized nature makes it more difficult to hack, he told the board. It would assure individuals that their vote was counted towards their preferred candidate, yet maintain the anonymity of the vote. It’d also ensure only one vote per person could be cast.

Alex also pointed to reasons why blockchain may not work for voting. It might be challenging to scale the technology to meet demand, those with malicious intent might try to hijack highly visible targets and affect the perception of the technology, and there would be job losses as fewer workers are needed to run elections.

“I suspect he was influential, because he normally is,” Tapscott says of his son. “It’s something our government should be actively exploring. Without blockchain, a voter doesn’t have cryptographic proof that the double-spin problem has been solved.”

Other researchers have raised questions about whether blockchain is appropriate for online voting (or if online voting is worth pursuing at all). Some common concerns are that even if blockchain is secure, the capture of a vote could still be tampered with by attacking vulnerable devices. An Internet outage could prevent people from voting, is another concerns, or voters could be more open to bribery because they could confirm their vote with the highest bidder.

Tapscott acknowledges those problems, and he puts them into a box. In fact, every blockchain problem is in one of two boxes – one being “reasons why this is a bad idea and won’t work” and the other being “implementation challenges.”

“Everything you’ve described to me is an implementation challenge,” Tapscott says. “The model of voting we have today is appropriate for the 18th century, but it’s not the kind of model we need to solve legitimacy for democratic institutions.”

In Tapscott’s future, his grandchildren will vote on a blockchain-enabled smart contract that will not only select the politician they want, but holds them accountable to the program they campaigned on.

Blockchain frees us from digital feudalism

In 1996, Tapscott and former Ontario Privacy Commissioner Ann Cavoukian co-authored Who Knows: Safeguarding Your Privacy in a Networked World. Released when Mark Zuckerberg was just nine-years-old, you might describe the book as ahead of its time. Today, Tapscott says we’re living in an era of digital feudalism, where just a few companies are in control of our personal data.

“It’s expropriated from us by the landlord and we get to keep a couple of cabbages,” he says. “So we can’t use the data to plan our lives, we can’t monetize it, and our privacy is being undermined.”

There’s a path out of that bad deal, one that people can solve with the help of blockchain. Tapscott points to the University Health Network’s (UHN) patient portal, a system that provides patients and their caregivers access to their personal health records across the hospital, research centre, and school alliance in Toronto. It announced surpassing 50,000 registered patients in January 2018. The system isn’t making use of blockchain today, but UHN CEO Dr. Peter Pisters has spoken publicly about blockchain’s potential for patient-centered healthcare. UHN researcher Dr. David Jaffray is mentioned in Blockchain Revolution for his plan to take the patient portal to the next level, providing patients total ownership over their data using blockchain.

“They believe patients can create value with their own data. It’s not about a system delivering health. It’s about individuals controlling their own health with the right data,” Tapscott says.

Some have pointed out that blockchain appears to contradict current privacy legislation. For example, blockchain by its nature is immutable and information can never be deleted from it. Yet the European Union’s General Data Protection Regulation (GDPR) requires that personal information can be deleted at the request of the individual.

What box does that problem go into?

“I think it’s an implementation challenge,” Tapscott says. “There are ways of not changing information on the blockchain but superseding it. You as a user control what is presented about you.”

It’s something to be managed carefully, he says. Not a reason that we should reject the idea of owning our own data.

One blockchain to rule them all

In the years since Blockchain Revolution was first published, the crypto-currency markets saw an incredible bubble of investment, and then a burst. Having the hype around Bitcoin and its like deflate was actually a good thing for blockchain, Tapscott says, because it shifted the focus from crypto-currencies to the underlying technology.

But now even the blockchain platforms used by enterprise are facing a problem similar to one the crypto-currency community faced – fragmentation. Different vendors and communities are creating blockchains and pushing them for different purposes, but they don’t all communicate to each other.

Tapscott points to Cosmos, which is working to develop an internet of blockchains to facilitate communication between different platforms. There is also an effort from the Enterprise Ethereum Alliance to develop standards for all tokens created on blockchain.

With a multi-stakeholder approach, there’s a chance that Tapscott’s grandchildren could view the blockchain as naturally as today’s digital natives do with the internet.

“The future isn’t something to be predicted, it’s something to be achieved,” he says. “There are many, many big intractable problems that this technology can help us solve. So it’s my hope that somehow we will find the will to make that happen.”

For a guy to see two grandchildren born within 12 hours of each other, the odds of success must look pretty good.