The company released Red Hat Enterprise Linux  7 this week, saying  it lays the foundation for open hybrid cloud so enterprises can run workloads across converged infrastructures.

Strategies including Bare metal servers, virtual machines, Infrastructure-as-a-Service (IaaS) and Platform-as-a-Service (PaaS) are converging to form a robust, powerful datacenter environment to meet constantly changing business needs, Red Hat said in a release. To bring all of them together it says RHEL 7 offers a “cohesive, unified foundation”  that enables IT departments to meet modern demands  as well as leverage Linux Containers and big data, across physical systems, virtual machines and the cloud.

“As the worlds of physical, virtual and cloud systems converge, Red Hat is delivering a true open hybrid cloud platform that gives both ISVs and applications a consistent runtime platform across bare metal systems, virtual machines, and public and private clouds,” Paul Cormier, Red Hat’s president of products and technologies said in a release. “This will be essential as applications move from on-premises to the cloud.”

–enhanced application development, delivery, portability and isolation through Linux Containers including Docker, across physical, virtual, and cloud deployments as well as development, test and production environments;

–file system improvements, including XFS as the default file system, which can scale to 500 TB;

–a kernel patching utility, kpatch (a technology preview) so the kernel can be patched without rebooting;

–the systemd system and service manager for overseeing processes, services and security;

–the ability to manage Linux servers more easily with OpenLMI, an API that can be used from multiple languages as well as its own client;

–and an improved installer and interface. 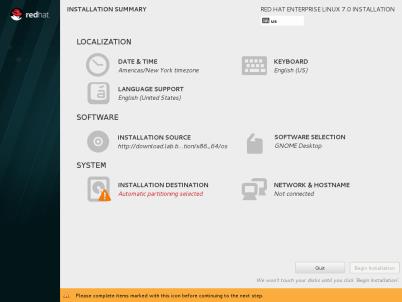 In a lot of ways its not the new capabilities but that they are all in one operating system, Forrester Research analyst Richard Fischera said in an interview. “This is a packaging of features and functions that allows Red Hat)Linux to act as a substitute for most RISC-Unix workloads” in competition with Unix operating systems and platforms from HP, IBM and Oracle.

“The difference between this and proprietary Unix is shrinking. This is the next step along the road.”

HP, IBM and Oracle run their own versions of Unix on their own RISC-based processors, which are more powerful than x86 CPUs. But, Fischera noted, Intel recently released a Xeon E7 v2 processor which includes reliability improvements over previous processors. So not only is the Linux software catching up to RISC-Unix, so is x86 hardware.

RHEL 7 runs on 64-bit Intel and AMD processors, and IBM’s Power7 and System z systems. It will not run on the IBM System z10 mainframe.

Howard Solomon
Currently a freelance writer, I'm the former editor of ITWorldCanada.com and Computing Canada. An IT journalist since 1997, I've written for several of ITWC's sister publications including ITBusiness.ca and Computer Dealer News. Before that I was a staff reporter at the Calgary Herald and the Brampton (Ont.) Daily Times. I can be reached at hsolomon [@] soloreporter.com
Previous articleNew data visualization suite from Information Builders
Next articleHow the CRTC will enforce CASL