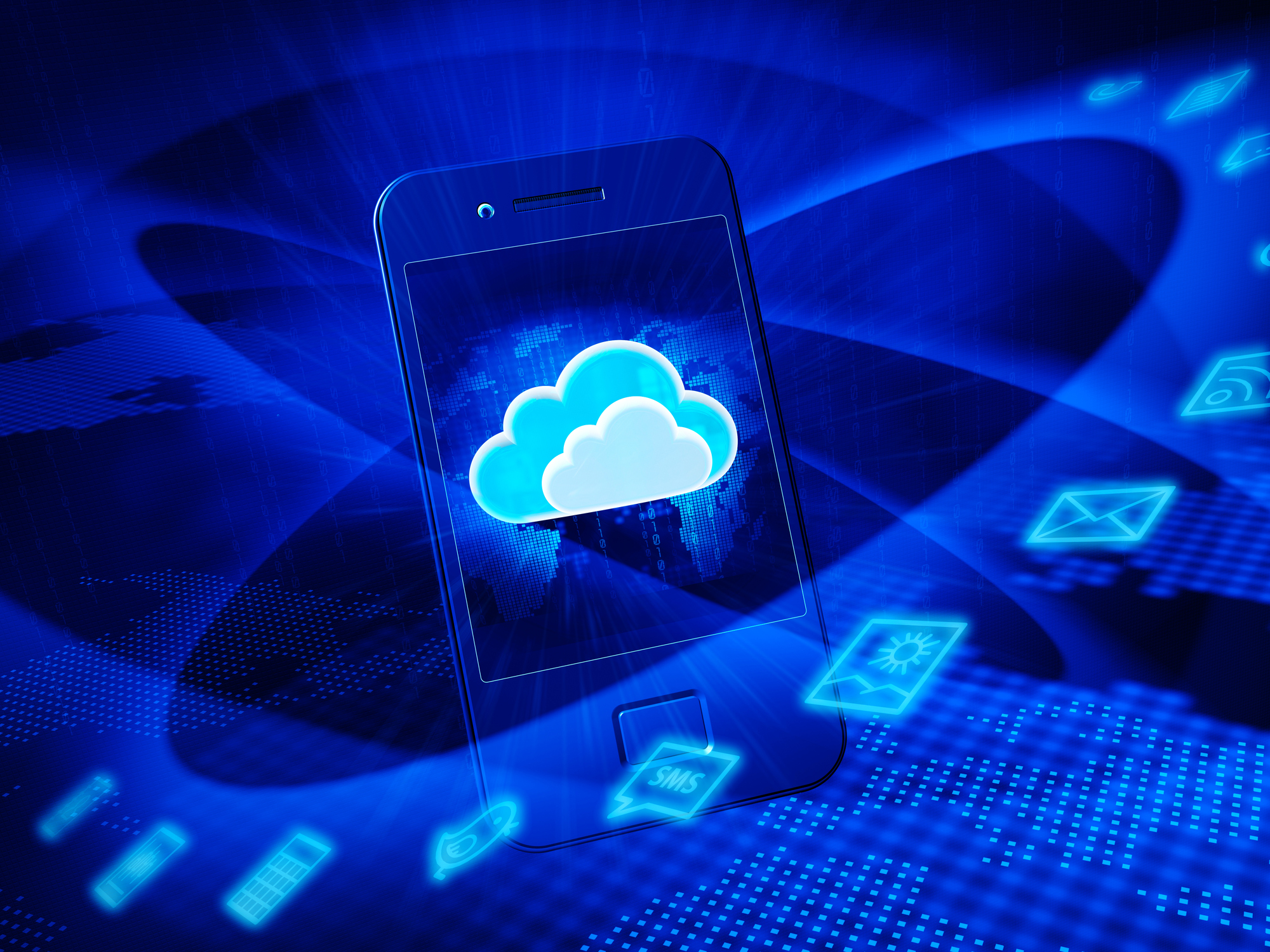 Telus has dethroned SK Telecom to become the mobile carrier with the fastest download speeds in the world, according to a new Opensignal report.

In the September report, Telus topped the chart with an average mobile download speed of 75.8Mbps. The second place went to Bell, also Canadian, at 70.6Mbps. Canada’s largest mobile carrier, Rogers, ranked third at 54.7Mpbs. All three carriers were faster than the global average download speed of 22.1Mbps. 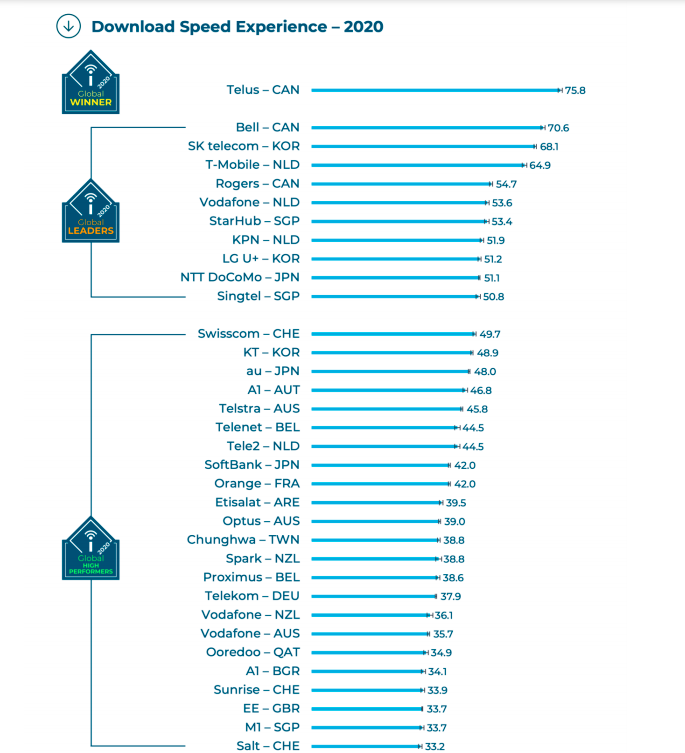 The rankings were compiled by Opensignal, which took 403 billion speed measurements across nearly 96 million devices between January and July 2020.

Despite the delayed 5G rollout in Canada, Canadian consumers have access to higher download speeds than countries with 5G, including South Korea, a leader in telecommunications, and the United States.

But download speed alone wasn’t indicative of other services. While Telus has the fastest download speeds, it doesn’t win in video experience, which includes metrics like stalling and latency at a variety of resolutions across a breadth of platforms. In that regard, T-Mobile in the Netherlands tied with A1 in Austria for the top spot, with Softbank in Japan and Vodafone in the Netherlands. Canada doesn’t even make the top 30.

Canada also missed the top 10 list in upload speeds. Switzerland’s Swisscom ranked on top in that category, followed by T-mobile in the Netherlands and LG U+ in South Korea.

None of the major U.S. carriers–Verizon, T-Mobile, AT&T made the best list. They also didn’t make the Rising Stars list, which highlighted the carriers that showed the fastest improvements in the respective categories.

Opensignal produces annual reports on the quality of global mobile networks by testing mobile network performance at the endpoints.

The currently deployed 5G networks using mid to high-band frequencies are ubiquitously faster than 4G LTE. But because it’s still in the early stages of deployment, users are only receiving high speeds sporadically and are connected to 4G signals most of the time. This leads to lower average speeds compared to Canada.

Even as a global leader in 5G deployment, South Korea is still in the early stages of its 5G rollout. Its 5G signal availability, however, also leads globally. Both SK Telecom and LG U+ provide over 15 per cent signal availability. KT is slightly behind at 12.5 per cent.

According to Opensignal’s 5G report in June, around 10 per cent of South Korea’s mobile users are subscribed to 5G. South Korea 5G subscribers enjoy stable speeds and good signal availability.

Between South Korea’s three largest carriers–SK Telecom, LG U+, and KT–LG U+ had the highest speed at 237.2Mbps. SK Telecom sat in the middle at 220.4Mbps, with KT taking third at 214.8Mbps. Note that South Korea was able to achieve these speeds with just mid-band spectrums, not the high-capacity mmWave. Its high speeds contrast the 5G speeds in Europe deployed on similar spectrums, which only range between 110Mbps to 170Mbps.

The situation is different in the United States. Due to their mid-band spectrums being locked for other purposes, Verizon, AT&T and T-Mobile launched their services using high-band mmWave. It has greater potential for faster speeds, but at the cost of lower penetration through obstacles. Being unable to send signals beyond walls cut into its availability. Because Verizon launched its 5G services exclusively on mmWave, it was able to achieve the highest speeds of 494.7Mbps. AT&T held the second spot at just 60.8Mpbs.

But because of poor penetration inherent to mmWave, users were only able to access Verizon’s high-speed network 0.4 per cent of the time. When outside its service range, Verizon customers were downgraded to an LTE connection. Opensignal found that AT&T and T-Mobile users connected to low-band services most of the time, thus accounting for their trailing average 5G speeds against Verizon.

Unlike Verizon, AT&T and T-Mobile accompanied their mmWave 5G services with low-band services on the 850MHz or 600MHz bands. Although they are part of the 5G spectrum, they’re designed to propagate signals over long distances rather than increasing speeds. Because of low-band signal’s higher penetration capabilities, AT&T and T-Mobile had much higher 5G availability at 22.5 per cent and 10.3 per cent respectively. Sprint launched its 5G services on the 2.5GHz mid-band spectrum and also offers its customers 14 per cent of the time.

Australian carriers launched their 5G service in 2019 with Optus and Telstra leading the way. Between the two, Telstra had the fastest 5G speeds at 231.8Mbps on average. It also had a higher download speed experience for 5G users at 52.5Mbps. The two telcos are practically tied in 5G signal availability with Optus at 8.6 per cent and Telstra at 8.2 per cent.

There’s always the pressure to have the newest and the best, but Canadians aren’t missing out much without 5G for the moment. There isn’t a service that necessitates ultra-high mobile speeds, at least to consumers.

With that said, 5G development must advance. Hailed as the future ubiquitous network, it can accelerate the development in the enterprise, medicine, and industrial sectors. Its high speeds and low latency can bring telemedicine, massive IoT sensors, advanced robotics, and inch ever so much closer to autonomous vehicles.

Tom Li
Telecommunication and consumer hardware are Tom's main beats at IT World Canada. He loves to talk about Canada's network infrastructure, semiconductor products, and of course, anything hot and new in the consumer technology space. You'll also occasionally see his name appended to articles on cloud, security, and SaaS-related news. If you're ever up for a lengthy discussion about the nuances of each of the above sectors or have an upcoming product that people will love, feel free to drop him a line at tli@itwc.ca.
Previous articleLeaders must do more to reassure Canadians on COVID Alert app, says tech lawyer
Next articleCyber Security Today – TikTok’s multi-factor authentication problem, install these updates from Cisco and Microsoft, and Airbnb hosts get a surprise