On the heels of its Snapdragon 855 SoC announcement, Qualcomm announced the new Snapdragon 8xc SoC designed for Windows laptops.

Qualcomm and Microsoft first demonstrated Windows being emulated on an ARM processor back in 2017. The companies said that the key goal is to drastically enhance battery life in devices designed for surface level workers.

In addition, its integrated LTE modem enables an always-on environment, an important feature for users who do remote work.

Efficiency mattered, but the Snapdragon 850 had subpar performance in many Windows apps meant it was a ways away from being adopted for mainstream use. Such was expected as the x86 instructions needed to be translated into RISC instructions before the ARM processors could handle them.

The new SoC is part of the Qualcomm Snapdragon family populated mostly by its SoCs designed by mobile. The new chip, however, is built from scratch to cater to Windows devices.

The GPU has been beefed up as well. Going by the naming scheme alone, the Adreno 680 should indicate a major leap from the Adreno 640 on the Snapdragon 855. It fully supports desktop APIs like DX12 and can supposedly drive two 4K monitors simultaneously. Qualcomm claims that the new GPU provides twice the performance and 60 per cent more power efficiency compared to the previous generation Snapdragon 850. 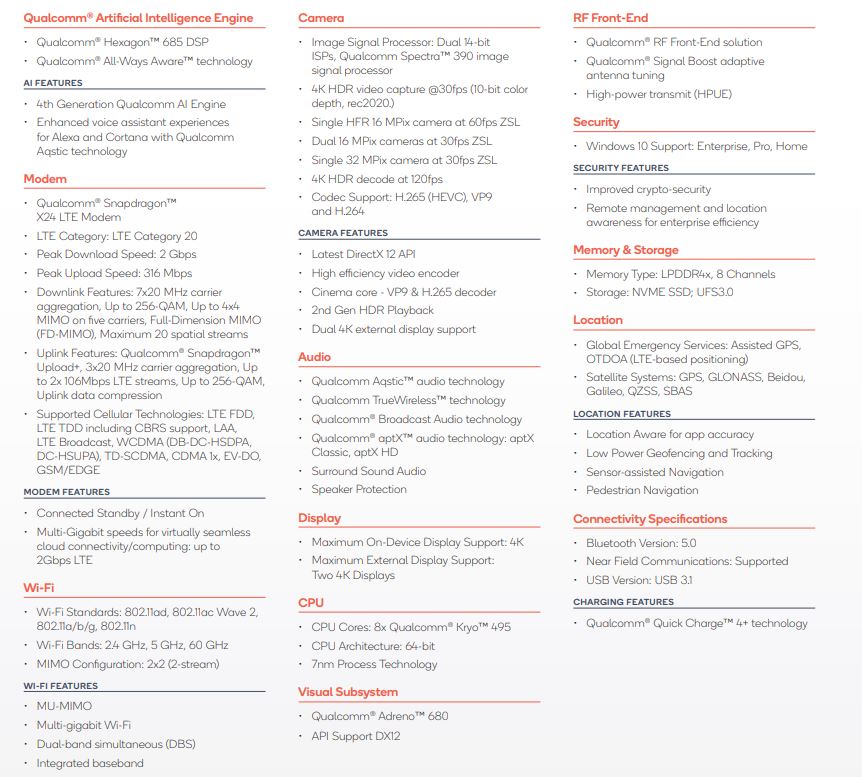 Alongside the new CPU and GPU is the new Hexagon 685 DSP. This co-processor is designed to handle machine learning workloads and help improve AI functions. It’s also the component that handles security. Interestingly, its name suggests that it’s a lower-tiered chip compared to the Hexagon 690 on the Snapdragon 855.

Always-on connectivity is handled by the integrated X24 LTE cat 20 modem with a 2Gbps max throughput.  Note that this is a premium 4G LTE modem, and doesn’t support 5G.

This time around, Qualcomm also placed emphasis on security for the enterprise. It now carries full hypervisor support, protected LTE connectivity, improved cryptosecurity, and certified for Windows 10 Enterprise. This should help to push the Snapdragon 8xc into businesses that need a power efficient, always-on device.

The Qualcomm 8xc will exist alongside the previous-gen Snapdragon 850 as a more powerful option.

Qualcomm hasn’t announced what devices will use the Snapdragon 8xc, In its product video, however, it showcased a few form-factors that it could be applied to, including a dual-screen book-like device and a folio-like foldable device. Prominent Qualcomm laptop partners include Samsung, Asus, and Lenovo.

Tom Li
Telecommunication and consumer hardware are Tom's main beats at IT World Canada. He loves to talk about Canada's network infrastructure, semiconductor products, and of course, anything hot and new in the consumer technology space. You'll also occasionally see his name appended to articles on cloud, security, and SaaS-related news. If you're ever up for a lengthy discussion about the nuances of each of the above sectors or have an upcoming product that people will love, feel free to drop him a line at tli@itwc.ca.
Previous articleRemote Canadian towns to get DDC drone delivery service
Next articleHashtag Trending: Huawei woes continue; Facebook violates privacy again; Google’s accidental ad