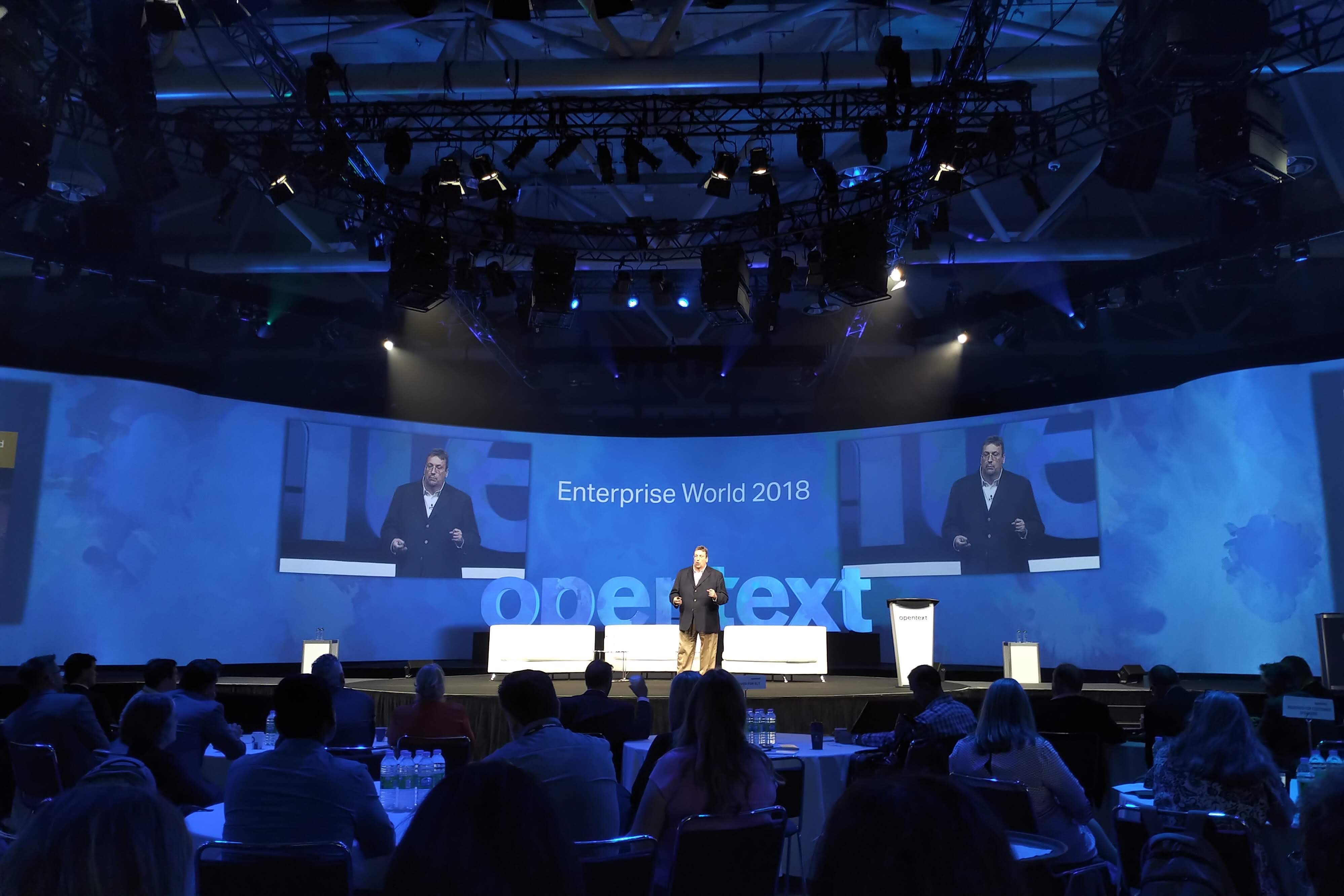 Traditionally run on-premises by its customers, OpenText executives made clear its software is flexible enough to run in just about any infrastructure scenario at the conference. It already supported the current release of Enterprise Information Management (EIM) in a managed service model on its own private cloud for customers. Now its announced that its software can be run on the public cloud with Amazon Web Services, Microsoft Azure, or Google Cloud Platform. On top of that, it’s exposed its underlying APIs to partner and customer developers with a new platform dubbed OT2.

With EIM now available in a container that’s portable to hyper-scale cloud providers, OpenText partners can now sell the software in a private cloud model for the first time, says OpenText CEO Mark Barrenechea.  Partners may also be attracted to building applications on top of OT2, a platform that exposes all of OpenText’s APIs like Lego blocks to be assembled with a low-code user interface.

“We see this completing the needs of our customers,” Barrenechea said during his keynote of OT2. “You still ask us to run on-premises for many strategic processes and we’re completely committed to that. We’re also all-in on private cloud managed services… all these things will live next to each other and have a long life.”

In a press conference later in the day, Barrenechea expanded on why OpenText has approached cloud in a private-only model until now. Its focus has been on the largest and most complex organizations as enterprise customers, many of them holding data that is just too sensitive to consider storing on servers owned by a third-party.

“They’re not going to be putting nuclear power plant designs into a box in Palo Alto. It’s just not going to happen,” he said. OpenText now supports 2,000 customers on its private cloud.

Another thing that’s not going to happen just yet is OpenText running on IBM Cloud, or other public cloud services beyond Google, Microsoft, and Amazon, says Savinay Berry, vice-president of cloud services at OpenText. “If we start to hear about other customer requirements over time, we’ll reevaluate that.”

OT2 reflects years of work to support customers that want to modernize IT infrastructure and run a hybrid cloud model, says Lynn Elwood, vice-president of cloud services of OpenText. For example, for customers that are using an on-premises installation of OpenText Content Suite (formerly Documentum) and want to integrate into Salesforce CRM.

“We have the flexibility to manage it all for them if they want, or they can run it in their own data centres, or any blend of that in between,” she says. In some cases, customers will have on division running an instance of OpenText on-premises to serve one business function and one that’s run in the cloud to serve a different function.

Customers have also been requesting OpenText allow them to run the software on a public cloud environment when compliance concerns are a factor, Elwood says. “They’ve already got that data centre relationship built with that provider and they’re in the region where the data needs to reside.”

With a product support model that now includes on-premises implementations, private cloud, and public cloud, OpenText is also working to simplify pricing for its managed services customers. Its new Prime Unlimited model charges $99 per user per month, so long as there is a minimum of 2,000 users and a three-year term is in place. This fee covers access to all of OpenText’s enterprise software as well as managed services from OpenText.

The default deal size for Prime Unlimited will be in the ballpark of $7 million, Berry says. It was inspired by a popular on-premises software sales model that sold unlimited licences for a set fee.

Prime Unlimited isn’t the default option, Barrenechea made clear, but an option. The default model is Prime Protect, a program that offers 24×7 support on OpenText’s software support and includes OpenText Core, a document collaboration tool. Other software as a service applications are accessed on a per user, per month basis independently.  Prime Protect does away with tiered service plans and sets the standard at 23 per cent of a licence being dedicated to support fees.

OpenText says that OT2 will be tightly integrated into its current release, OpenText Release 16, so customers will be able to use it to pass data between various solutions they’re already using. Applications built by developers using the microservices in OT2 are hosted in OpenText’s private cloud.

OpenText previously launched its own app built on OT2 with OpenText People Center. It is adding to that list this year with OpenText Quality, an app for the life sciences industry, and OpenText Legal, which manages client onboarding and document sharing by working with OpenText eDOCs.

OpenText OT2 is available today. The Quality and Legal applications will be available in the second half of 2018.

How Nunavut recovered from a ransomware attack

Recommended for you
Public Sector