Every three years the Open Web Application Security Project (OWASP) has the unenviable task of compiling a list of the top 10 web application vulnerabilities. It’s a guide to the top issues web developers should be looking out when coding because these are the biggest problems that lead to breaches.

The OWASP’s task is unenviable because the list, compiled since 2004,  doesn’t get smaller. In fact, regrettably, many of the same vulnerabilities appear on list after list — not necessarily in the same order — because software coders are sloppy/careless/reckless. 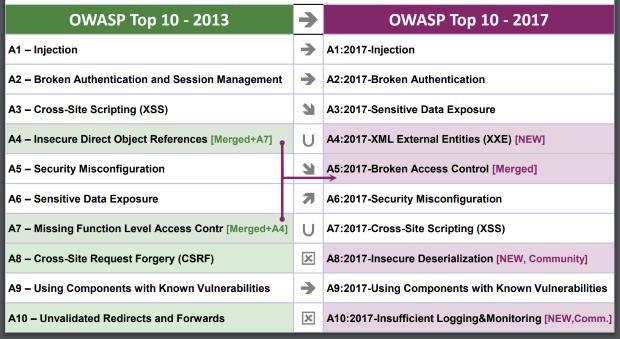 “The rapid pace of modern software development processes makes the most common risks essential to discover and resolve quickly and accurately,” says the project in its forward to this latest edition. ” We can no longer afford to tolerate relatively simple security problems like those presented in this OWASP Top 10.”

“It’s amusing and sad at the same time to see XSS in the list,” commented Ilia Kolochenko, CEO of security vendor High-Tech Bridge,  “a plague of web applications that has been around for almost 15 years now. XSS vulnerabilities are quite simple to prevent and detect, nonetheless many Web developers still carelessly push code riddled with XSSs into production.”

He did admit that  XSS problems have become more complicated to detect because often they reside in a Web application parts almost inaccessible for automated crawlers. Web technologies including HTML5, AJAX and SPA (single page applications) overcomplicate Web application architecture and cannot be reliably audited with old-school vulnerability scanners and automated tools, he added. “Flawed application business logic is probably the most complicated issue, as to detect such flaws, one needs to understand internal business processes of a company, and even bug bounties will unlikely ever detect them.”

Related Articles
Why security is the top issue for DevOps teams in 2017
Beware of automated credential-stuffing attacks, says vendor

— #5: Broken Access Contol (which is actually a merging of two vulnerabilities from the 2013 list). Restrictions on what authenticated users are allowed to do are often not properly enforced. Attackers can exploit these flaws to access unauthorized functionality and/or data, such as access other users’ accounts, view sensitive files, modify other users’ data, change access rights, etc.;

The list not only details the vulnerabilities and typical attack scenarios but also how CISOs and developers can prevent them from occurring.

The list was compiled by firms that specialize in application security and an industry survey that was completed by over 500 individuals. A primary aim of the OWASP Top 10 is to educate developers, designers, architects, managers, and organizations about the consequences of the most common and most important web application security weaknesses.

Howard Solomon
Currently a freelance writer, I'm the former editor of ITWorldCanada.com and Computing Canada. An IT journalist since 1997, I've written for several of ITWC's sister publications including ITBusiness.ca and Computer Dealer News. Before that I was a staff reporter at the Calgary Herald and the Brampton (Ont.) Daily Times. I can be reached at hsolomon [@] soloreporter.com
Previous articleDonald Trump inauguration comes with 14 tech-related administration roles lacking nomination
Next articleCyber security strategy must be determined by boards, says world group