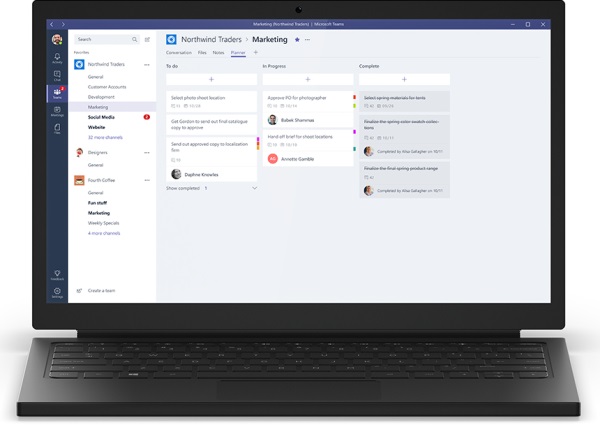 Microsoft Teams, the enterprise-focused communication platform, announced a handful of new features for users across industries this week.

Teams will be getting two new time management features designed for the two billion first-line workers. Firstly, the new Time Clock feature allows employees to clock in to work through the mobile app, eliminating the need for a paper tracking system. Employees and management will soon be able to customize schedules and timesheets through Teams as well. Furthermore, IT admins can geo-fence the clock-in process to ensure that the employee is onsite when clocking in.

Secondly, management will soon be able to notify their employees by role – including only the relevant departments – to a conversation.

Time Clock is rolling out now. Roles notification will roll out in August.

For environments where messages require immediate attention, Microsoft is adding priority notification and read receipts. Priority Notification pings the recipient every two minutes for twenty minutes until it receives a response, while read receipts show the sender when the message has been read by the recipient.

Priority Notification is rolling out now. Read receipts will arrive later this month.

If a message needs to be sent across an entire company or department, users can now do so through the Announcement feature. Channel cross-posting allows a single message to be posted in multiple channels simultaneously, and Channel moderation grants user(s) the ability to control the content and participants of a channel. All three features are rolling out this month.

“Teams is absolutely the biggest opportunity in this coming year,” said Gavriella Schuster, corporate vice-president of One Commercial Partner. “You can build workflow, you can build business process, and there, you can use PowerApps to move business applications into that experience.”

One of the key reasons for Microsoft’s emphasis on Teams is how it can drive the use of Microsoft Office suite.

“All of those different flows pull other services with it,” said Frank Shaw, corporate vice-president of Microsoft communications.  “If you’re using teams, you’re more likely using OneDrive for Business, you’re more likely to use more, be a more active user of Word, Excel.”

Tom Li
Telecommunication and consumer hardware are Tom's main beats at IT World Canada. He loves to talk about Canada's network infrastructure, semiconductor products, and of course, anything hot and new in the consumer technology space. You'll also occasionally see his name appended to articles on cloud, security, and SaaS-related news. If you're ever up for a lengthy discussion about the nuances of each of the above sectors or have an upcoming product that people will love, feel free to drop him a line at tli@itwc.ca.
Previous articleCyber Security Today – Watch those Amazon buckets, bad Android apps and keep an eye on your payment card statement
Next articleHashtag Trending – malware hits 25 million Android devices; FCC leaks Samsung phone; Amazon spends $700 million to retrain workers

Hashtag Trending August 12 – Facebook is not popular with teens; misinformation...