Contrary to smartphone’s plateauing development, its market competition is fiercer than ever. In the quest to cram more screen into an increasingly constrained space, all manufacturers agreed that folding display is the next logical smartphone evolution. 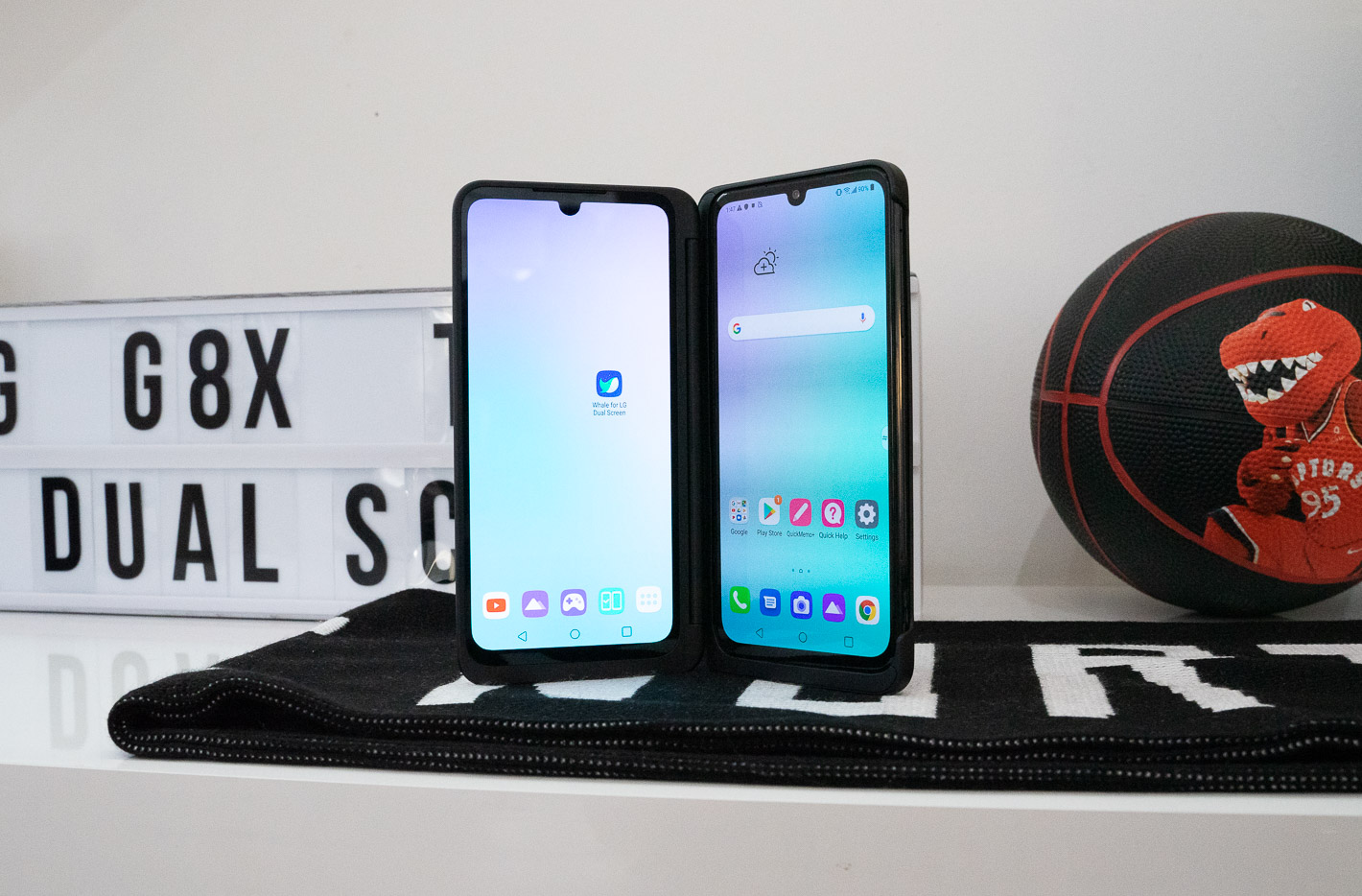 Instead of pursuing the trend of a foldable display, LG debuted a display case that attached to its V50 flagship phone. Its conservative approach was both puzzling and fascinating at the time: its existence indicated that LG was interested in the foldable market, yet didn’t fully commit to a product that matched pace with its rivals.

But its simplicity ultimately prevailed against finger-wagging critics; reaching mass-market status before its more complex and elegant competition. Just a few months after its reveal, LG’s foldable phone arrived in Canada as an exclusive bundle with the LG G8X ThinQ, a bigger variant of the LG G8 ThinQ smartphone. LG boasted that having two screens can improve productivity by 40 per cent, but how does its claim translate to real-world use? 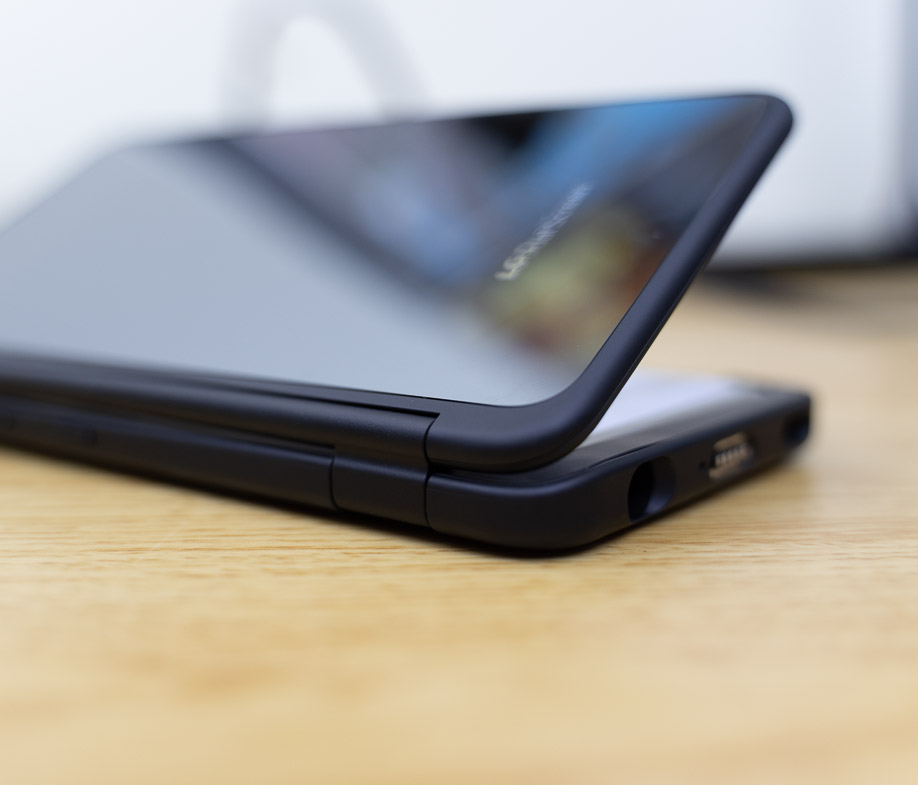 Even without the case, the LG G8X ThinQ already tips the scale at 192g. Installing the dual-screen case tacks on another 132g, sinking the total to 324g. Not only is it heavy, but its colossal brick-like silhouette is hostile to pockets.

Contrary to its unwieldy appearance, navigating between the two displays is actually quite seamless: a quick three-finger swipe slides an app from one side to another, and each display can be controlled asynchronously, complete with their own app drawer. Furthermore, settings like brightness can be independently adjusted as well.

Having two screens means twice the content at the same time. Learning how to use it effectively takes time and patience, especially when it feels cumbersome to hold for long periods.

The Dual Screen’s immediate benefit is being able to open two apps side by side. Granted, Android has had split-screen for some time now, but its view is suboptimal and constrained compared to two dedicated displays. Furthermore, not all apps are compatible.

That’s where the LG Dual Screen truly shines. If you frequently move information between two apps – whether it be dragging and dropping from one app to the next or copying and pasting text – then the Dual Screen case can feel like a blessing. Personally, it made copy texts between the G-Suite and a variety of social media platforms supremely easy.

Being able to view two full-screen apps is its main advantage for staying productive, but LG has also included a few tricks for other tasks. The LG keyboard is a great example; when flipped into landscape mode, it can expand to fill the entire bottom screen, providing an expansive typing area. Similarly, gamers can enjoy a full-screen virtual gamepad in supported mobile games. Even when it’s off, the display case can act as a stand.

But perhaps most importantly, the second display can function as a viewfinder for the camera. With one screen acting as the preview, it allows the camera side to be freely tilted. This makes taking pictures at awkward angles (low angle or top-down) much easier.

The LG G8X ThinQ, the host device to the Dual Screen, touts top-end hardware. It’s all flagship here; the LG G8X ThinQ uses the speedy Qualcomm Snapdragon 855 SoC, 6GB RAM, 128GB of storage, and a beefy 4,000mAh battery. It also has a smaller notch (at the cost of motion controls) and a larger 6.4-inch OLED display, although its resolution has been reduced to 2,340 x 1080p, likely to conserve battery.

Now that I’ve extolled on the benefits, it’s time to emphasize a few glaring deficiencies.

As mentioned previously, the phone is massive and can feel clucky to maneuver. Because the keyboard doesn’t stretch across both displays in portrait orientation, typing while holding just one half can feel awkward.

Physical dimensions aside, other foldable phone designs are more user-friendly. Whereas the Samsung Galaxy Fold has extra cameras and a touchscreen on the cover to allow for common controls, the LG G8X ThinQ Dual Screen only has a small, low-resolution monochrome display on the cover. Its capability is restricted to displaying the time and notification count. Worse still, the rest of the chrome-plastered front is an abhorrent fingerprint magnet, begging to be wiped every three minutes.

Since the cover has no touchscreens or other control elements, it forces me to flip open the display even for mundane tasks like music controls and answering calls. With that said, the cover display can be flipped 360-degrees to permanently expose the phone.

Lastly, despite a reduced screen resolution and a larger battery, the second display aggressively siphons battery life. I was able to get four hours of screen-on time at most.

Pricing is a tricky subject. While its $1,199 pricetag lands it squarely in the high-end category, it’s tame compared to the Samsung Galaxy Fold. Granted, it’s far less capable and has less hardware to boot.

Also, buyers need to be conscious of less novel offerings. Excellent alternatives like the OnePlus 7 Pro, Samsung Galaxy S10, and the Google Pixel 4 XL all have their respective advantages over the LG G8X ThinQ, many at lower price points. That being said, none can offer the same dual-screen experience.

In conclusion, the LG G8X ThinQ Dual Screen does live up to its multitasking hype, but you may have issues over its form factor and occasionally tedium. This is a product that you should try out in person to see if this behemoth is right for you.

Tom Li
Telecommunication and consumer hardware are Tom's main beats at IT World Canada. He loves to talk about Canada's network infrastructure, semiconductor products, and of course, anything hot and new in the consumer technology space. You'll also occasionally see his name appended to articles on cloud, security, and SaaS-related news. If you're ever up for a lengthy discussion about the nuances of each of the above sectors or have an upcoming product that people will love, feel free to drop him a line at tli@itwc.ca.
Previous articleHashtag Trending – 2020 job trends; injured Amazon workers protesting; don’t lose the Apple cloth
Next articleCan low code platforms solve legacy gridlock?