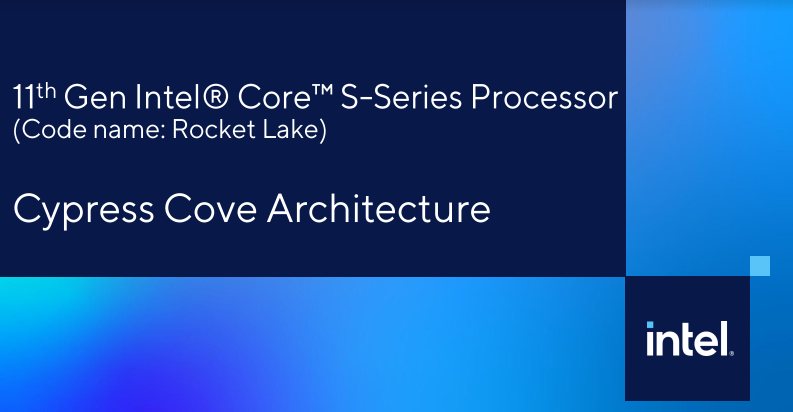 In a blog post published on Oct. 30, Intel revealed that Rocket Lake-S processors will top out at 8 cores/16 threads, two cores short of the current generation Core i9-10900K flagship chip.

Cypress Cove, Rocket Lake-S’ new core, will feature the same architecture as the cores found in Intel’s 10th-gen “Ice Lake” mobile processors. Although porting a newer architecture squeezes out a bit more life from Intel’s ageing 14nm node, it also means that Rocket Lake-S will not enjoy the power and performance benefits of Intel’s 10nm transistors. The peculiar architecture porting means that core frequency, power consumption, and thermals will be points of interest.

A new memory controller ups the memory frequency support to DDR4-3200, although this spec can be exceeded via Intel’s Xtreme Memory Profiles (XMP) or manual memory overclocking. Also new is the 500 series chipset. Rocket Lake will continue to use the LGA1200 CPU socket and will be backwards compatible with Intel’s 400 series motherboards with the same socket.

Rocket Lake-S will bring PCIe Gen 4 support to the blue team, a feature Intel was criticized for omitting on its 10th-gen platform. The processor will offer up to 20 lanes to “provide more configuration flexibility.” Beyond graphics, PCIe 4’s other benefit is enabling support for PCIe 4 SSDs. Note that at the time of this article going live, consumer hardware that can take advantage of PCIe 4’s improved bandwidth are few and far between. Users will have to wait for future developments to realize its new potential.

As for other features, Rocket Lake-S will support Intel’s Deep Learning Boost and new overclocking tools to fine-tune the processor’s performance.

Intel maintains that users will benefit the most from higher frequency and IPC gains, as “games and most applications continue to depend on high-frequency cores to drive high frame rates and lower latency.”

Intel processors have generally lead against AMD’s in lightly threaded workloads. However, that lead narrowed with every iteration of AMD Ryzen CPU release. AMD’s Ryzen 5000 series processors announced late last month was the most threatening yet, with the Ryzen 9 5900X shown to achieve a Cinebench R20 score of 631. Granted, the results shown during AMD’s presentation were obtained internally and should be taken with a grain of salt.

Intel Rocket Lake-S processors are expected to launch in Q1 2021. The company has made no further announcements regarding its other details.

Tom Li
Telecommunication and consumer hardware are Tom's main beats at IT World Canada. He loves to talk about Canada's network infrastructure, semiconductor products, and of course, anything hot and new in the consumer technology space. You'll also occasionally see his name appended to articles on cloud, security, and SaaS-related news. If you're ever up for a lengthy discussion about the nuances of each of the above sectors or have an upcoming product that people will love, feel free to drop him a line at tli@itwc.ca.
Previous articleCyber Security Today – Stay away from parcel notice texts, Microsoft urges companies to install a patch and customer information of millions up for sale
Next articleHashtag Trending – Book sales are exciting again; Influencer marketing; Superspreader database