The new Intel Ice Lake architecture is fabricated using Intel’s now matured 10nm transistor node. According to an Intel slide deck from 2017, these transistors are 45 per cent more power efficient and have 25 per cent higher performance relative to the 14nm transistors Intel has been using for the past four years. 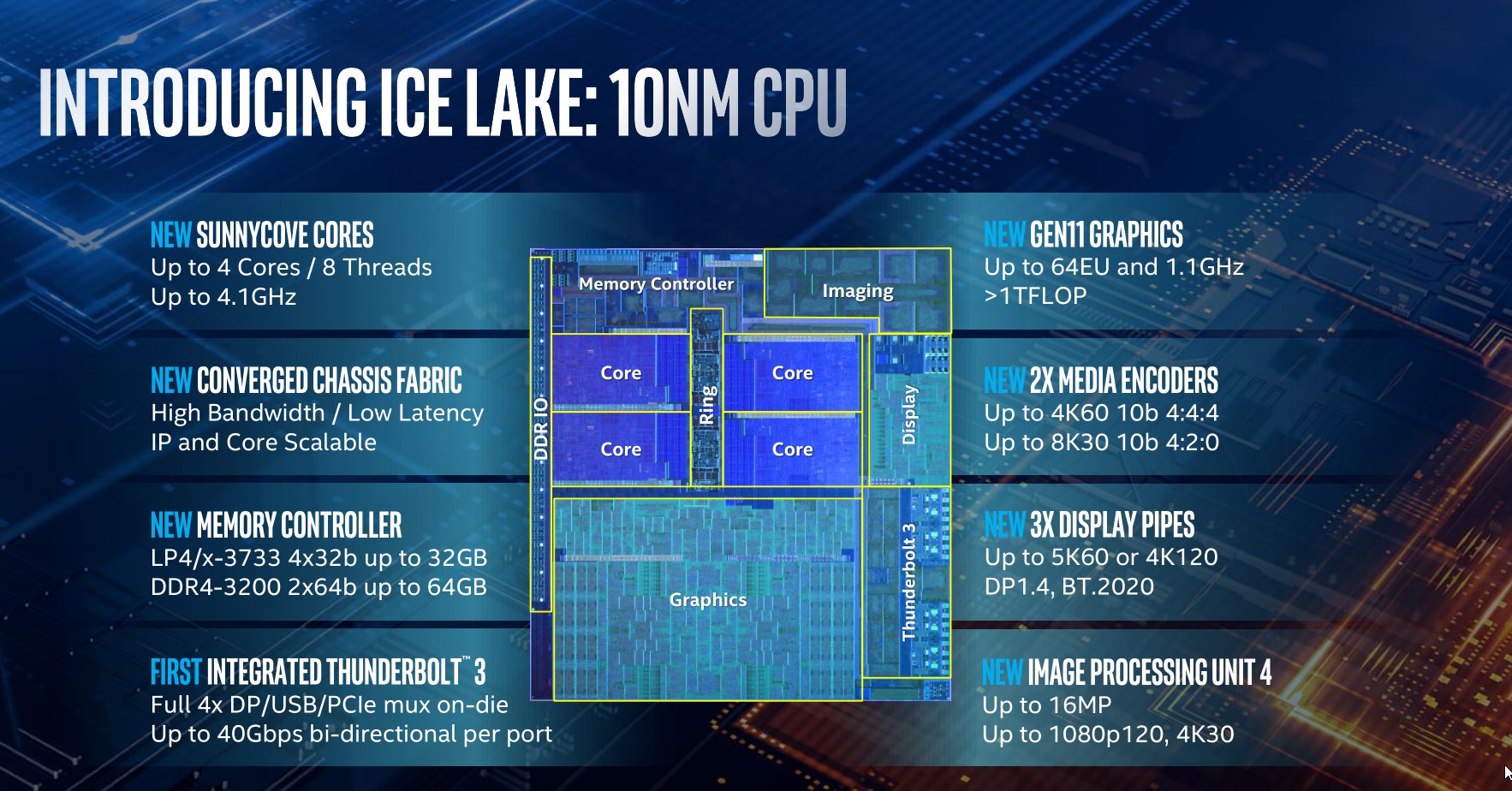 In addition to the node shrink, Intel’s 10 nm node also features Hyper Scaling, which is an umbrella term for a host of technologies that brings 2.7 times transistor density per area. Fin pitch, metal pitch, cell height, and gate pitch have all been reduced. More importantly, Intel’s 10nm node is now isolated with a single one dummy gate instead of two. These technologies converge together and allow for more compact chip designs, as well as better scalability for larger chips. A definitive guide of all the in technicalities and their meanings can be found in Intel’s glossary.

Ice Lake isn’t the first time Intel has deployed its 10nm transistors. The very first batch was actually released under the Cannon Lake architecture in extremely limited quantities. Cannon Lake only existed in one SKU in North America: the Core i3-8121U, and Cannon Lake’s product family wasn’t even listed on Intel’s ARK database. Intel’s 10nm process also made a brief appearance under the AgileX FPGA for the data center market.

Intel kept most of the SKUs and configuration under wraps, but we do know that the initial product offerings will feature 4 cores, 8 threads, and operate at 4.1GHz in turbo boost mode. Intel has yet to make an official announcement on any variants with higher core counts. 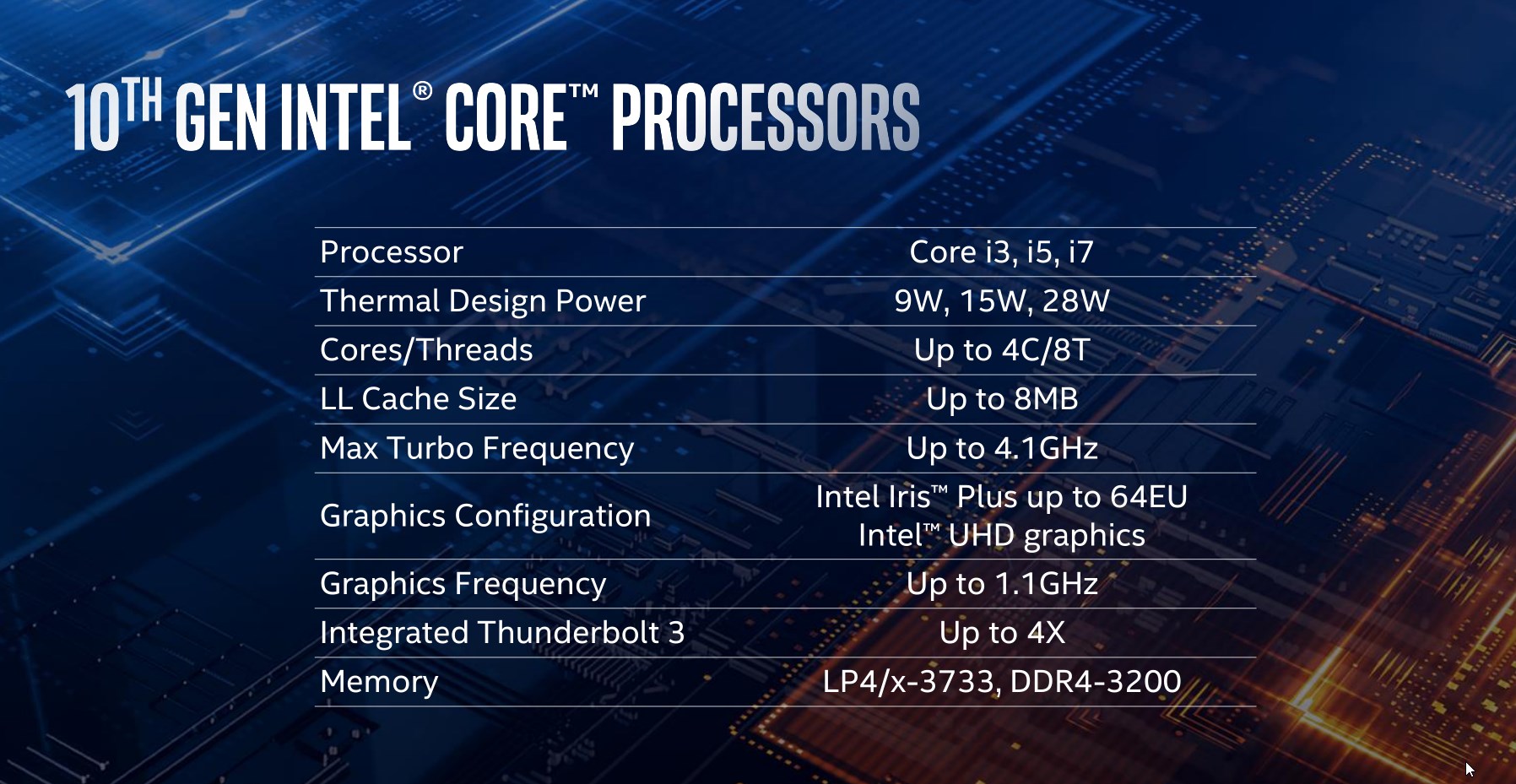 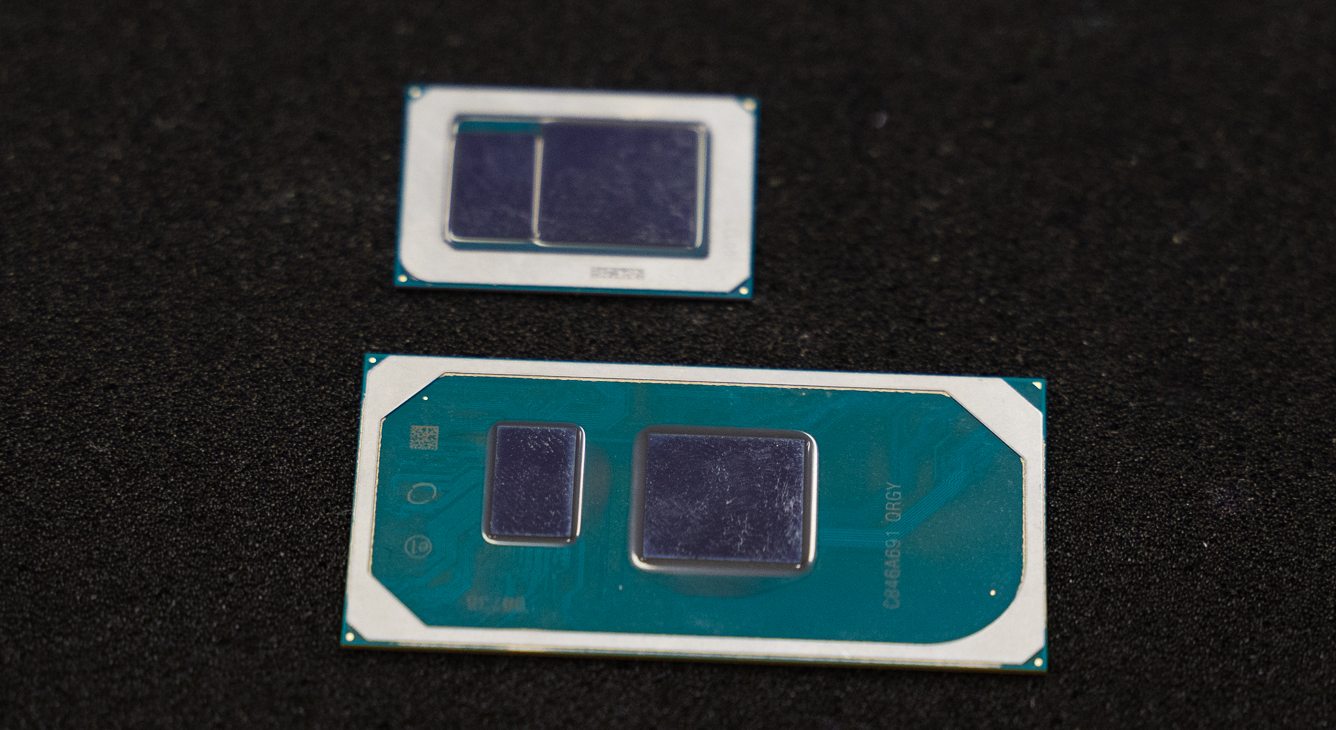 Ice Lake has also received major overhauls at the design and features level. The actual processor core, code-named Sunny Cove, provides 15 to 18 per cent instructions-per-clock (IPC) performance improvement over the previous generation. Both its L1 and L2 cache size have been increased as well to help buffer more instructions. 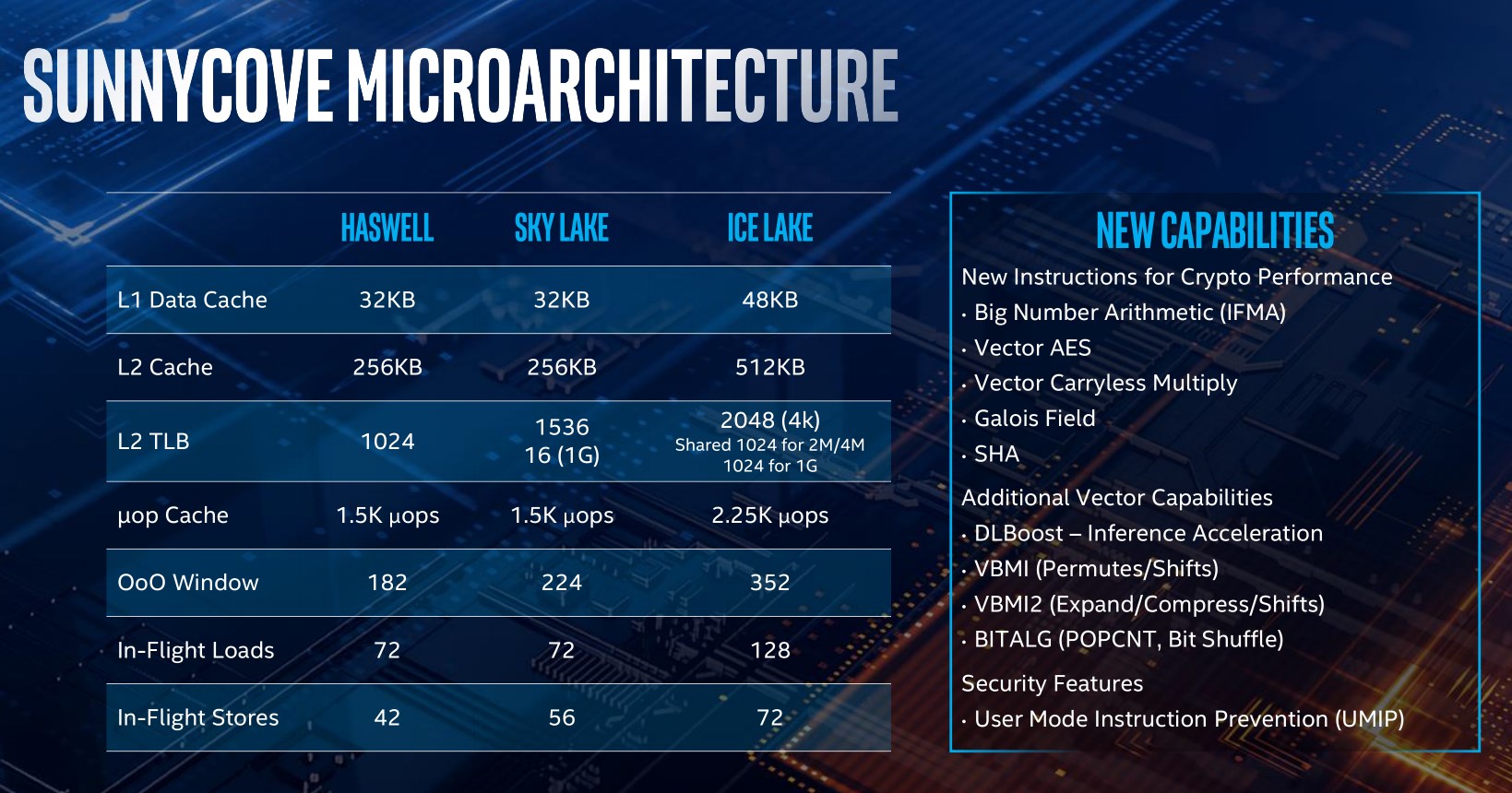 Another major (and frankly long overdue) upgrade is a new 4x32GB, 3,733MHz dual-rank LPDDR4 controller. Compared to LPDDR3, LPDDR4 features higher capacity, bandwidth, all the while reducing the operating power. The increased bandwidth is particularly important as it can feed more data to the processor when it’s handling VR, graphics, and multi-threaded, large scale workloads. To better balance performance and power consumption, Intel has added Gearing Mode that dynamically tunes the RAM frequency depending on the workload at hand.

Because more and more AI features are migrating to the client, Intel has integrated a new feature called Deep Learning Boost into Ice Lake processors. Under certain AI workloads, it provides up to 2.5 times higher performance than the previous generation processors. Additionally, new AVX521 instructions have been added to improve performance in enterprise workloads like SHA crptography. Very few consumer products actually use AVX512 so the impact on those use cases is negligible. 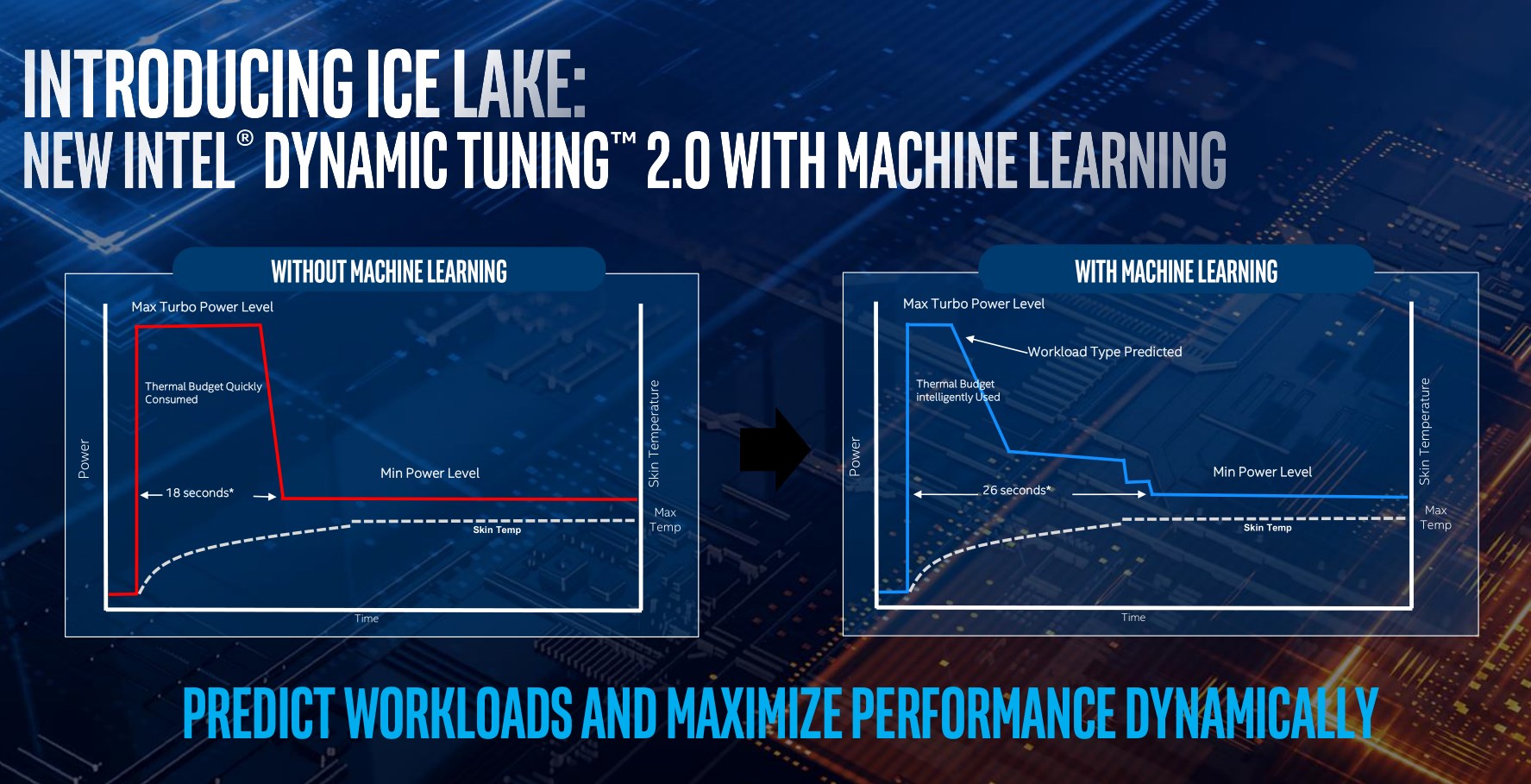 Finally, Ice Lake will have full safeguards against known Spectre and Meltdown vulnerabilities.

The Thunderbolt controller has now been integrated into the processor itself. Intel explained that this was done to reduce integration complexity for motherboard OEMs and save some platform area. Because the electric traces now follow a simpler path from the Thunderbolt port and the controller is now closer to the processor core, this new design can reduce latency by a tiny fraction. Removing a separate signal repeater on the motherboard can save some power as well. Ice Lake’s Thunderbolt controller can manage up to four ports on a single device.

Ice Lake’s Gen 11 graphics has received a significant overhaul. The newly designed graphics subsystem now features 64 Execution Units (EUs) capable of delivering up to 1.12TFLOPS of FP32 calculation and up to 2.25TFLOPS in FP16 performance. Furthermore, Intel has installed shared memory instead of using a portion of the L3 cache. This eliminates the complexity of needing to allocate cache between graphics and compute workloads. 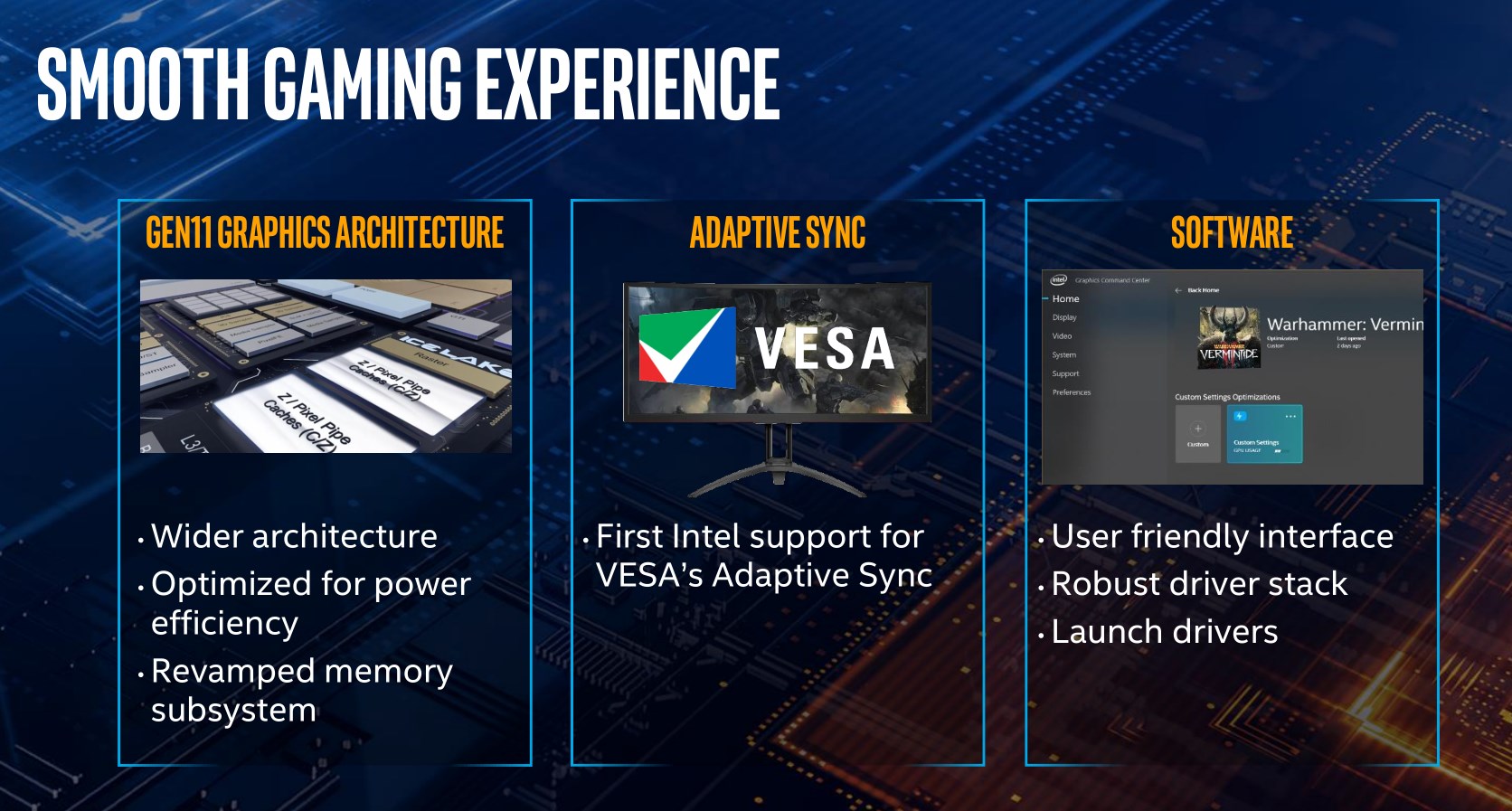 For the creative professionals, Gen11 graphics sports two dedicated transcoders that can either operate independently or work on a single stream together. They’re capable of compressing 4K 60FPS video streams at 4:4:4 chroma subsampling, or an 8K30FPS at 4:2:0. Intel says that the new encoders have 30 per cent increase in encode quality compared to the previous generation. In a demo against a Whiskey Lake system, Ice Lake was demonstrated to encode a video stream roughly twice as fast using Adobe Premiere Pro.

On the gaming front, Intel has added support for Adaptive Sync, an open vertical sync technology to its Gen 11 graphics. With an adaptive sync compatible monitor, Intel Gen 11 graphics can eliminate screen tearing, a phenomenon that occurs when the graphics output rate isn’t synced with the monitor’s refresh rate. 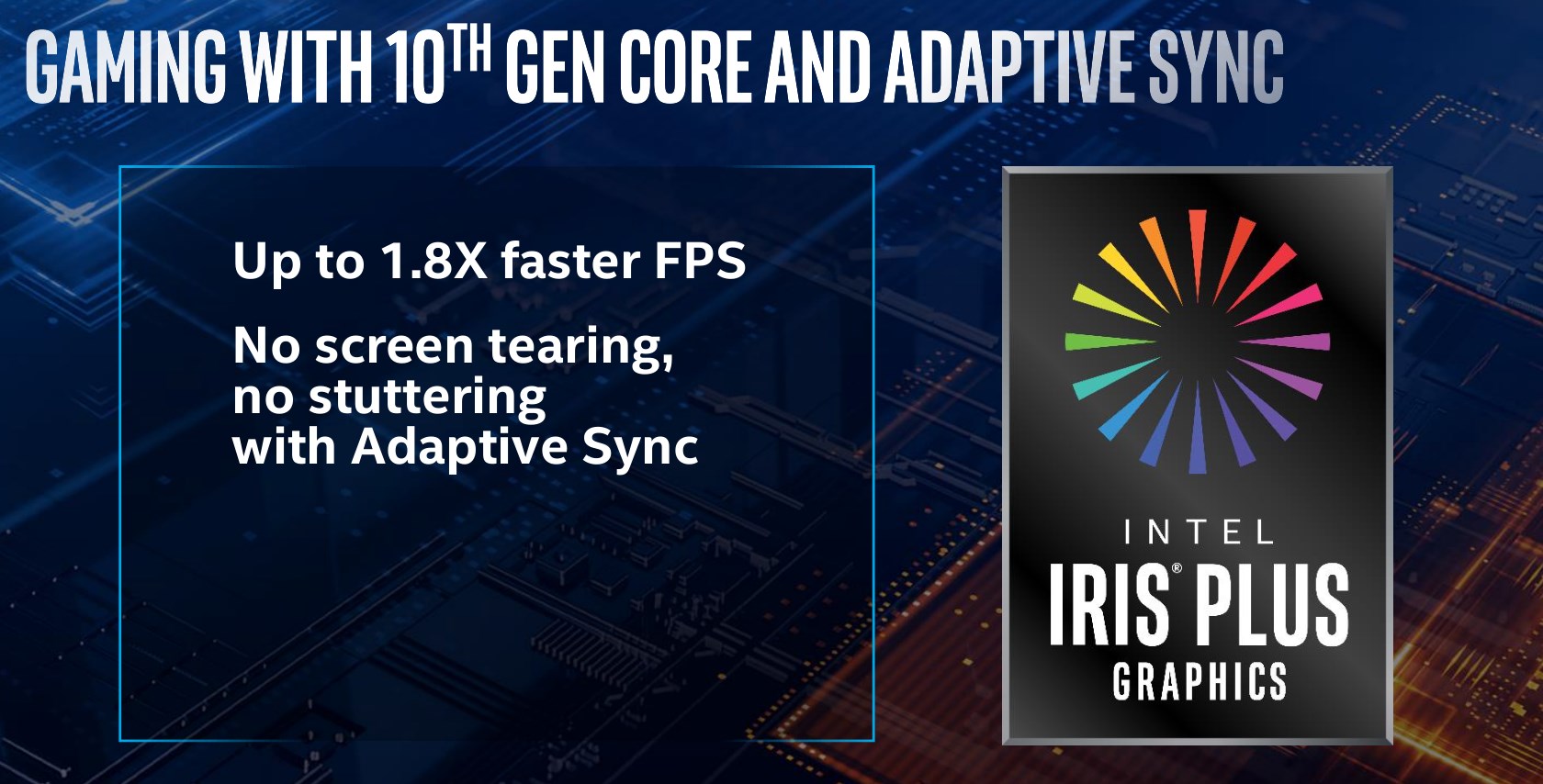 Wi-Fi connectivity is paramount in today’s business environment. For Ice Lake, Intel has introduced its Wi-Fi 6 Gig+ technology, which can transmit at 160MHz channel instead of Wi-Fi 6’s standard 80MHz. This theoretically would bring nearly 1,700MHz throughput — about twice as fasts as a standard Wi-Fi 6 solution. 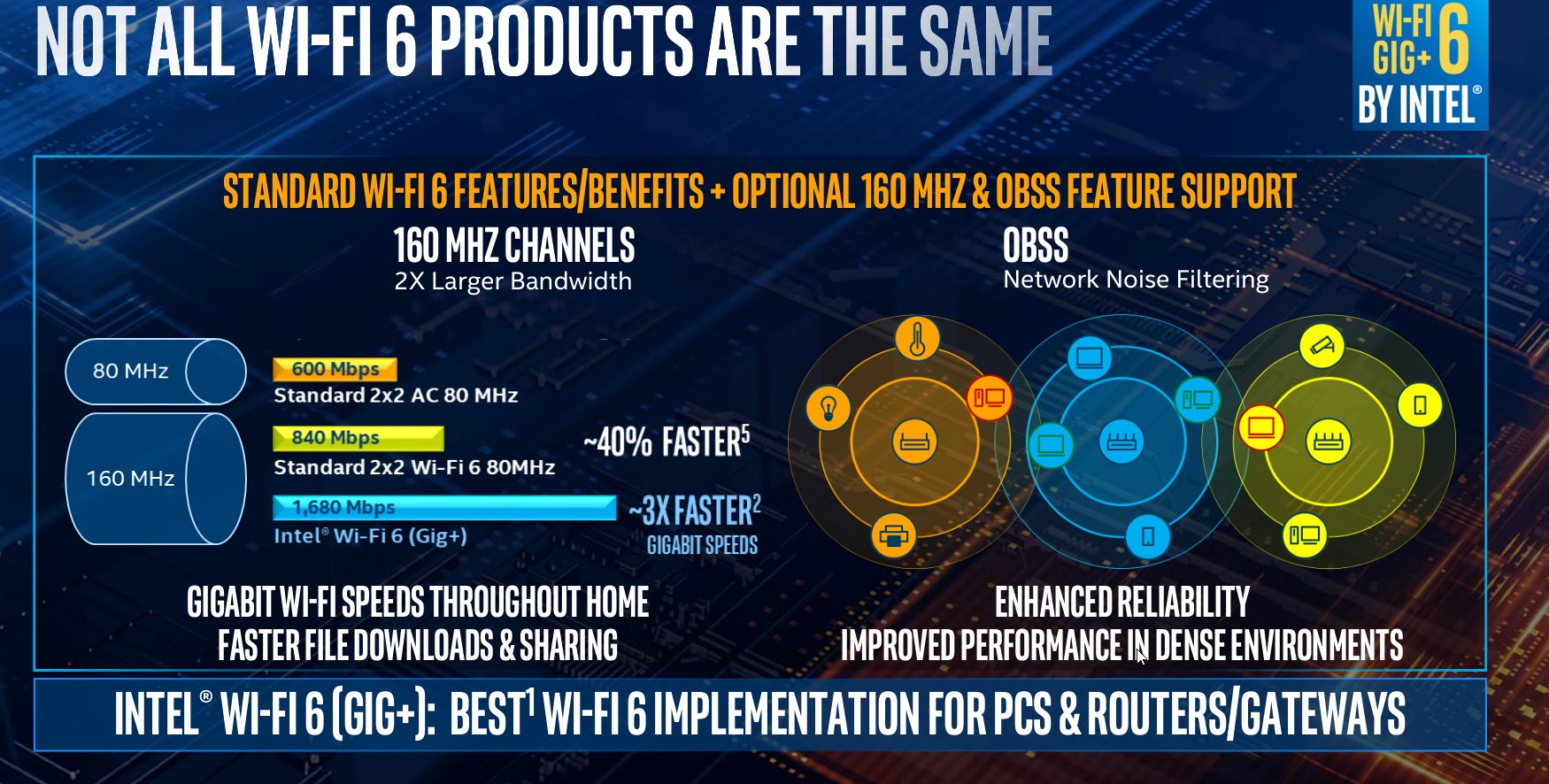 Ice Lake will continue to follow Intel’s traditional naming scheme. The lineup consists of 9W,15W, and 28W TDP packages with each segmented into Core i7, Core i5, and Core i3 brands. There will be both active and passive cooling designs. Intel claimed that over 30 machines with Ice Lake will be available by the end of this year, with the first roster of laptops shipping next month.

Tom Li
Telecommunication and consumer hardware are Tom's main beats at IT World Canada. He loves to talk about Canada's network infrastructure, semiconductor products, and of course, anything hot and new in the consumer technology space. You'll also occasionally see his name appended to articles on cloud, security, and SaaS-related news. If you're ever up for a lengthy discussion about the nuances of each of the above sectors or have an upcoming product that people will love, feel free to drop him a line at tli@itwc.ca.
Previous articleCanadians use YouTube to learn, and other takeaways from the Watchtime Canada report
Next articleLeveraging technology to manage healthcare at home