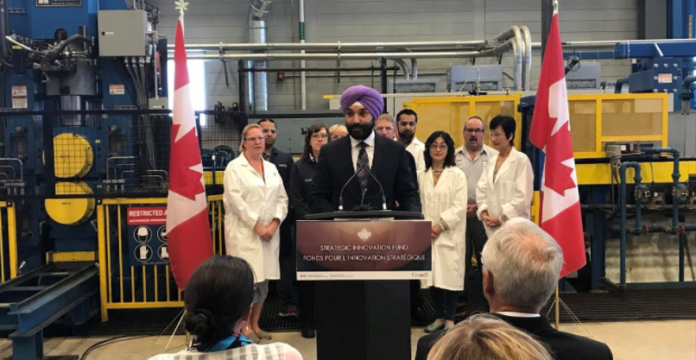 The Canadian government has selected nine consortiums for its supercluster program shortlist.

Navdeep Bains, Minister of Innovation, Science and Economic Development, is currently on a cross-country tour to announce successful applications. His first stop in Halifax, NS, confirmed the Ocean Supercluster bid from the Atlantic region, which aims to “maximize the economic potential of Canada’s ocean economy by investing in digital ocean technologies in aquaculture, capture fishery, offshore oil and gas, and clean energy,” a government press release says.

“I’m thrilled to kick off a cross-country tour in Halifax today to announce shortlisted applicants to the Superclusters Initiative,” Minister Bains said in an Oct. 10 statement. “Superclusters are job-creating regions with strong economies, like Silicon Valley, and our government intends to create five of them in Canada. Through the Superclusters Initiative, we’ve started conversations and created solid partnerships between government, the private sector, academia and communities. In today’s knowledge-based economy, this collaboration is essential. Together, we are building the economy of the future, creating the jobs of today and tomorrow and gearing up for global success that will benefit all Canadians.”

He added: “Today I announced the shortlisted applicant to the Innovation Superclusters Initiative for the Atlantic region. If selected as one of Canada’s five superclusters, the Ocean Supercluster would energize Canada’s ocean economy by investing in digital ocean technologies that will increase Canada’s competitiveness and create middle-class jobs for this generation and the next.”

The Atlantic region’s supercluster is led by Petroleum Research Newfoundland and Labrador, and includes over 25 firms, such as Emera Inc., Clearwater, Aspin Kemp & Associates, radient360, and Dalhousie University.

The other successful bids include:

Final applications from the shortlisted groups are due by Nov. 24.

Notably missing from this list are the three information and communications technology (ICT) bids previously covered by IT World Canada, including the blockchain supercluster, microelectronics bid, and digital identity application.

The Innovation Supercluster Initiative was first announced as an $800 million (CAD) competition looking to fund industry-led groups promising to innovate in sectors such as advanced manufacturing, agrifood, clean tech, digital technology, health/biosciences, clean resources, and infrastructure and transportation in the 2016 federal budget, but the initiative was expanded in the 2017 budget to $950 million. The Canadian government accepted first round applications until the end of July, and will choose up to five finalists for the program in early 2018.

The Globe and Mail notes that final bids could be different from the nine included on its shortlist, however. The consortiums have been encouraged to add more participants, including those from unsuccessful applications, and create “more ambitious job-creation plans.”

Mandy Kovacshttp://www.itwc.ca
Mandy is a lineup editor at CTV News. A former staffer at IT World Canada, she's now contributing as a part-time podcast host on Hashtag Trending. She is a Carleton University journalism graduate with extensive experience in the B2B market. When not writing about tech, you can find her active on Twitter following political news and sports, and preparing for her future as a cat lady.
Previous articleChina will be increasingly important in Canada’s economic future
Next articleMichael Dell commits to future of IoT, reveals new Dell IoT Division