How to build your analytics talent bench

Access to useful data is cheaper than ever before, but many companies are finding it difficult to generate business value from the increasing information flow.

The number of organizations that report obtaining competitive advantage from analytics is “on the decline,” according to The Talent Divide, a study by the Massachusetts Institute of Technology (MIT) Sloan School of Management and the SAS Institute.

“Even with increases in useful data over the past two years, our survey suggests that companies might be getting less effective at using analytical insights to guide strategy, despite increases in investment in analytics technology,” according to the 2014 study which queried some 2,719 analytics professionals, business executives, managers and subject matter experts from around the world.

For instance, 50 per cent of the respondents cited turning analytical insights into business action as one of their top analytics challenges. Four in ten, or 43 per cent, of companies, reported that their lack of appropriate analytical skills was a critical challenge. 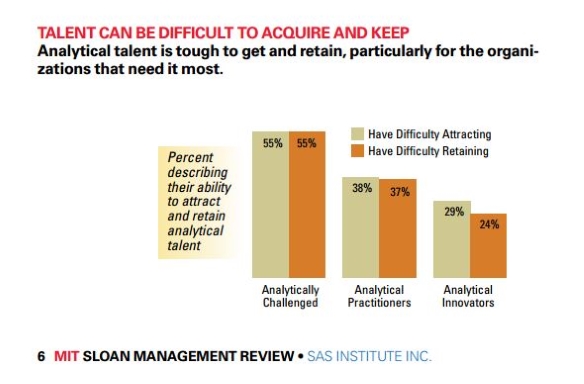 The study also referenced figures from the McKinsey Global Institute which estimates that the United States economy will have a shortage of 140,000 to 190,000 people with analytical expertise and a shortfall of another 1.5 million managers and analysts “with the skills to understand and make decisions.”

In Canada, a government-funded study by the Information Communications Technology Council (ICTC) indicates that the country will need to fill 182,000 IT positions by 2019. Among the top 10 most in-demand occupations listed in the study were for database analysts and data administrators.

“The figures are not surprising. The talent gap is absolutely real,” according to Pat Finerty, vice-president of alliances and business development at SAS Canada. “We have had to be clear with our business partners that there is a limited talent pool with expertise in managing and maintaining some of our products.” 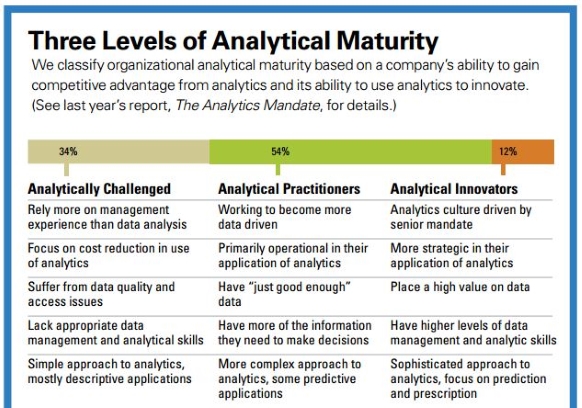 SAS offers its analytics expertise to customers and partners, but it is also looking towards the long-term development of data analytics talent in the country. The company is working with Canadian schools like York University’s Schulich School of Business and Queen’s University by contributing materials and software, creating internship opportunities and helping develop an analytics-focused curriculum, said Finerty.

Another approach being pursued by SAS is the development of analytics tools that can be used easily by non-data experts, according to Paul Lovell, vice-president of professional services for SAS Canada. 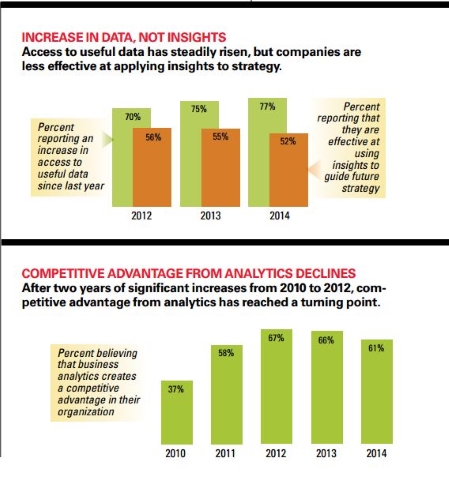 Here are some recommendations from the MIT Sloan-SAS study on how to build a deeper analytics bench:

Develop internally – More than 63 per cent of companies are looking in their own backyards to build analytical skills. These companies are using either or a combination of both formal and on-the-job training.

The advantage of this approach is that your employees already know your business. This is very useful when it comes to dealing with what has been called the “last mile” problem of analytics which is communicating analytical insights to end-users.

To this end, some organizations hire consultants or turn to universities to train their data analysts and scientists in the art of storytelling.

Providing formal training helps companies: deepen their talent expertise in a given area; provide data workers an opportunity to improve their competency and their career prospects; build community among data workers; and send out the message that the firm is committed to analytics and in so doing attract more talent.

Formal training might not work for all companies. Some firms with little analytical expertise might need to hire outside talent first and then gradually build talent internally.

Think talent integration rather than infusion – Infusing new analytics talent without the right support and guidance can alienate traditional data workers. The study recommends building working teams that are a mix of existing staff and new hires that like to work with others.

Sometimes activities outside the workplace such as group sports, charity activities and night outs can help to encourage camaraderie and defuse tensions among members of the IT department.

Create a team – Many companies have an “unrealistic” list of analytics skills they want to see in new hires. “In reality, data analytics is such a broad area that no one person can fill all the skills required,” said Lovell.

Some data workers might be better in understanding the math under algorithms, others may have a knack for statistics and some may be more adept in programming. “In many instances, what you need is not one person, but a team of people with complementary skills,” he said.

Build a common core – Improving the abilities of managers to understand, to trust and act on analytical insights is critical in addressing the “last mile” issue in analytics.

The survey found that some companies are turning to centres of excellence that showcase best practices, research, and technical resources.

The survey also shows that some of the organizations are doing more to train existing managers to become more analytical (49 per cent) than to train analytics professionals to better understand their business (34 per cent).

Another approach is to build a “common language” for assessing and using data.

The study cited Remco Brouwer, director of business intelligence at Coca-Cola, who said that there are many ways an organization can look at data. For example, is data being consumed for a business unit or a whole country? Should the data be filtered based on geography or legal entity?

The soft drinks executive said many big companies suffer from having “several flavours of data and multiple versions of the truth.”

“…So the first thing is to align people on one set of truths. Do that and you can skip the first 10 minutes of meeting where people discuss the ‘what’ by comparing the numbers, is yours right or mine?” said Brouwer. “If you that under control, then you can move straight to the ‘why’ and the ‘how,’ such as whether you’ve been successful or not and how to make a plan going forward.”