Before this week’s meeting of international lawmakers in Ottawa on the problems of online privacy violations and disinformation, the chair of the House of Commons privacy committee insisted it was not supposed to be three days of kicking social media giants like Facebook and Google.

However, that’s how Monday night’s opening round started.

Seven witnesses, including academics, entrepreneurs and a former U.S. presidential campaign official, gave short, sometimes passionate, opening statements to Canadian MPs plus a group of international lawmakers who together call themselves the International Grand Committee on Democracy and Privacy.

That was just the opening for the seven. They’ll be given an opportunity to expand their positions over the next two days.

Which perhaps is why some invited CEOs will likely send lower-level executives Tuesday when it will be their turn to testify.

UPDATE: In testimony Tuesday morning, former Research In Motion co-CEO Jim Balsillie called for legislation that makes chief executives and boards of directors personally liable for security and privacy violations. “That focuses the mind,” he said. Balsillie is now chair of the Waterloo, Ont.-based Centre for International Governance Innovation.

UPDATE: Facebook CEO Mark Zuckerberg will not testify this morning. Instead the company is represented by global policy director for Canada Kevin Chan.

UPDATE; The House of Commons privacy committee voted to have Zuckerberg and Facebook COO Sheryl Sandberg served with summonses if they ever come to Canada, to demand he appear before the committee. Committee chair MP Bob Zimmer called Zuckerberg’s non-appearance shameful.

MP Bob Zimmer, who chairs the Commons’ privacy committee and host of this session of the International Grand Committee, said the opening session was aimed at “warming up the conversation.”

—Roger McNamee, Facebook investor and author of the critical book “Zucked,” said the only way governments can get the attention of social media companies is to temporarily shut them down.
Silicon Valley the industry can’t regulate itself, he said, and left alone “it will create harms that will not easily be remedied”
“They by nature invade privacy and by nature undermine democracy, and there is no way to stop that without ending their business practices as they exist;”

—Taylor Owen, who holds the chair in media, ethics and communications. at McGill University’s school of public policy, called for more regulation of social media platforms.
Their failures — disinformation, hate speech, election interference, privacy breaches, anti-competitive behaviour — are symptoms, not the cause of the problem, he said.

—Shoshana Zuboff, Harvard Business School professor and author of the recently published book “The Age of Surveillance Capitalism,” said
surveillance has become “the default model for Silicon Valley and the tech sector,” and over time became “a virus that has infected every economic sector.”

The proof, she said is that the CEO of Ford Motor Co. says the only way it can compete with a market capitalization of Google is to change the automaker into a data company that streams information from millions of its vehicles.

Companies take personal data and re-purpose it as “free raw material.” Some of it is used for products and service improvement, but the rest is declared and sold as a “behavioral surplus, identified, for their rich predictive value” thanks to machine learning.

A leaked Facebook memo, she noted, describes a hub called “FB Learner Flow” which creates 6 million predictions of human behavior are being fabricated every second.

Surveillance capitalism is an “assault on democracy,” she said, and the front line is being waged in Toronto where Sidewalk Labs — a division of Google’s parent company Alphabet Inc. — is the technology partner in a planned lakeshore digital community. [The final plan for that community has yet to be released or approved.];

—Jason Kint, chief executive officer of Digital Content Next, a trade association representing 80 content publishers around the world, including the New York Times, the Financial Times and the BBC, urged governments look into forbidding large technology platforms that collect personal data from using it for secondary purposes.

His group praised a decision by a German regulator to limit the ability of Facebook to collect and use data across its apps.

In light of the Cambridge Analytica “scandal” — in which a company was able to gather personal data on millions of Facebook users without telling them it would be sold to Cambridge and used to target political ads in several countries — Kint said Facebook should be required by governments to undergo an independent audit of its user account practices, and its decisions to preserve or purge real or fake accounts.

–-Heidi Tworek, assistant professor of history at the University of British Columbia who has written on hate speech and disinformation and just published a book on how the news media was manipulated by the Nazis in Germany, said there are striking similarities between the way the online media is abused today and the actions of Hitler. 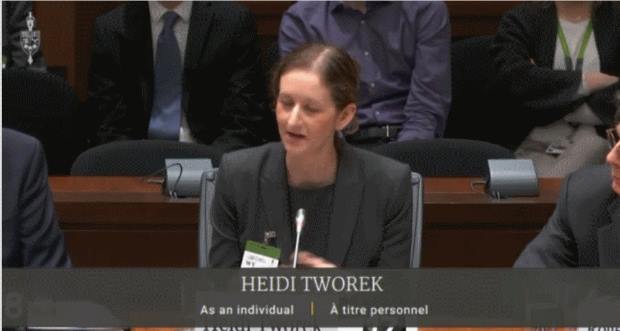 Like others, she said governments should think about the business models of tech companies. But she also warned to learn at least one lesson from Germany: Between the first and second war as unrest rose the government created more state-controlled content. The idea was to protect democracy, she said, but when Nazis came to power they were able to control commercial radio. “Well-intentioned regulation, if we’re not careful, can have tragic unintended consequences,” she concluded.

They ard whoever shows up from social media companies are testifying before a group of lawmakers from 12 countries — Canada, Argentina, Chile, Estonia, Germany, Ireland, Singapore, the United Kingdom, Ecuador, Mexico, Morocco, and Trinidad and Tobago — calling themselves the International Grand Committee on Disinformation.

Notably not with them are any elected official from the United States, where most leading social media and Internet companies are headquartered.

Hours before the committee meeting started the Canadian government released a declaration on electoral integrity online it hopes will guide social and digital platforms to tighten content and ads ahead of the October federal election. Facebook and Microsoft have already agreed to the Canada Declaration on Electoral Integrity Online, which establishes a common understanding with the platforms about their responsibilities in the online democratic space,

Howard Solomon
Currently a freelance writer, I'm the former editor of ITWorldCanada.com and Computing Canada. An IT journalist since 1997, I've written for several of ITWC's sister publications including ITBusiness.ca and Computer Dealer News. Before that I was a staff reporter at the Calgary Herald and the Brampton (Ont.) Daily Times. I can be reached at hsolomon [@] soloreporter.com
Previous articleHashtag Trending – AMD announces Ryzen 3000; Gates’ reading list; Facebook crypto
Next articleCanadians use YouTube to learn, and other takeaways from the Watchtime Canada report