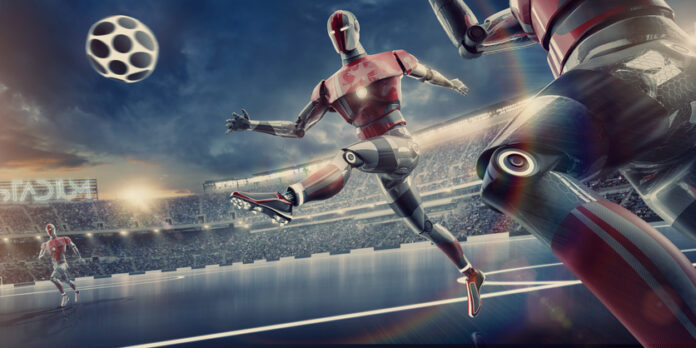 Team CYRUS, led by research assistant Nader Zare and PhD student Mahtab Sarvmaili, both in the Faculty of Computer Science, was able to use AI and machine learning to create autonomous robot soccer players in various positions for the two-dimensional competition.

According to Sarvmaili, the RoboCup competition is divided into two leagues: the Hardware League and the Software League.

“The software league is more like a simulation of these robotic competitions,” she said. “For example, we have the rescue league that are like these firefighters, kind of agents. Or we have the soccer league which we are competing in.”

The main focus of the software league, according to Sarvmaili, is to train and design the behaviour of an agent, or in this case, the soccer player.

The robotics team also uses a search algorithm to predict the best action in the field.

To advance their research, Team CYRUS joined forces with soccer teams Halifax Wanderers and Dalhousie University Varsity to improve their soccer techniques, especially at a time when in-person activities are limited.

According to Sarvmaili, Team CYRUS acts as assistant coach to the Halifax Wanderers, helping them develop new potential soccer plays and work on their offensive and defensive play. Team CYRUS creates simulations for the soccer team.

“For example, if they’re playing against a soccer team from Alberta, what would be the best strategy? Or how can [they] set the players in the field for the highest performance against their opponent?” she said.

By 2050, the RoboCup aims to have a complete team of autonomous robots with body structures similar to those of human players, playing against that year’s FIFA champion.

Looking into the future of robotics in the team-based sports industry, Sarvmaili said she thinks robots could play a support role in sports like hockey or basketball, similar to the way Team CYRUS supports the Halifax Wanderers.

Apart from that, she sees opportunities for Team CYRUS’s research in the field of video games.

“The thing that pops into my mind is video games. This would be really interesting for applying our models in video games. For example, FIFA uses a centralized controller that controls all of the agents [in] the game, but this game is fully automated…So if we could apply our models on the player, you can create a very distributed, fully autonomous video game, that would be more challenging and more interesting for the gamers,” she said.

Finally, she said that robots can generally be used in other areas as well. For example, robotic technology could be used to control traffic.

“We could create a very well-organized system that doesn’t involve doesn’t require any humans to be involved to control the traffic,” she said.

She also believes that the healthcare industry could benefit from some robotic technology and that robots could play a major role in cleaning up the environment.

This win for Team CYRUS helps enhance Canada’s place in the robotics industry.

Samira Balsara
Samira is a writer for IT World Canada. She is currently pursuing a journalism degree at Toronto Metropolitan University (formally known as Ryerson) and hopes to become a news anchor or write journalistic profiles. You can email her at sbalsara@itwc.ca
Previous articleHashtag Trending August 12 – TikTok most downloaded app; Twitter’s new user interface; Facebook fights anti-vax info
Next articleAccenture hit by Lockbit ransomware, claims “no impact”