CIOs start to sour on outsourcing IT infrastructure

As CIOs continue to embrace the “as a service” model for infrastructure, they’re also becoming less satisfied with their outsourcing experience, according to IT World Canada’s fifth annual Canadian CIO Census, sponsored by CA Technologies. 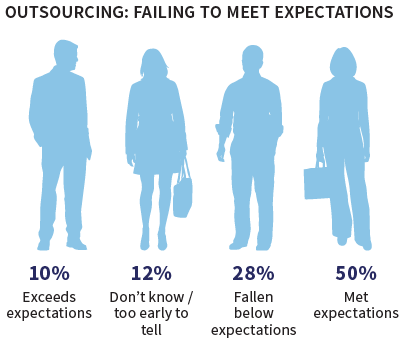 Of course, some CIOs are just happy to keep things in-house as well. That suits Sumon Acharjee, CIO at North York General Hospital, fine. He recently added Pure Storage’s all-flash data platform to host his mission-critical applications and patient data, including electronic health records. The hospital only refreshes its IT infrastructure every seven years because of tight government budgets, so taking on an outsourcing or cloud infrastructure service that inflates his operating expenses just is not an option.

“The way the performance of a hospital is measured, IT is considered overhead,” he says in a phone interview. “The more operational expenses you incur, the more disincentive it is in terms of acquiring funding, so we need to keep our operational dollars as minimal as possible.”

While cloud service providers often push using “OpEx” budget instead of the high capital expenditures required to set up internal infrastructure, government funding is set up to support CapEx. With the Pure’s Evergreen Storage program that deploys once and then delivers upgrades for a decade, Acharjee knows his OpEx costs are under control.

But it’s not just public sector firms that are opting to keep data centres under their thumb. At nutritional supplements maker Iovate Health Sciences International Inc., Kevin Newcombe, director of IT, says he sees no need to outsource.

“It’s better to have control over your own applications,” he says. “If we want to make a change, we make it. We don’t have other people controlling our software.”

Part of the motivation to keep the data on-premises is the intellectual property that his company must protect as its competitive advantage. The formulae that make up its various health supplement products are all unique to Iovate, thanks to its research and development investments in health sciences.

But Newcombe isn’t surprised that other IT leaders are disappointed with their outsourcing experience.

“I don’t think the evolution is there for people to be hands-off and allow others to give them the right response and the quick turnaround times that business requires today,” he says.

According to the CIO Census, the most common benefit sought by CIOs from their outsourcing partners is a reduced time spent on infrastructure. Congruously, the number two benfit sought is the ability to focus on their core business.

So it may be that companies that don’t see IT infrastructure as absolutely crucial to keep under their watch are those that seek outsourcing more often. Other popular benefits sought from outsourcing include: better efficiency, reduced costs, and improved employee productivity.

Back at North York General Hospital, Acharjee feels he’s getting all that out of his new flash storage arrays, an IT project that he describes as transformative to his business.

“More of the patient record is becoming electronic,” he says. “A lot more data is going in, with richer data files. We need a platform that can keep up with that and be resilient. You could outsource that and let it be someone else’s problem, but this allows us to keep it integrated and provide future growth and capacity.”

The census results don’t foreshadow a decline in outsourcing, just a stagnation of the activity. Most (55 per cent) firms say they expect their usage of it will remain flat for at least two years.