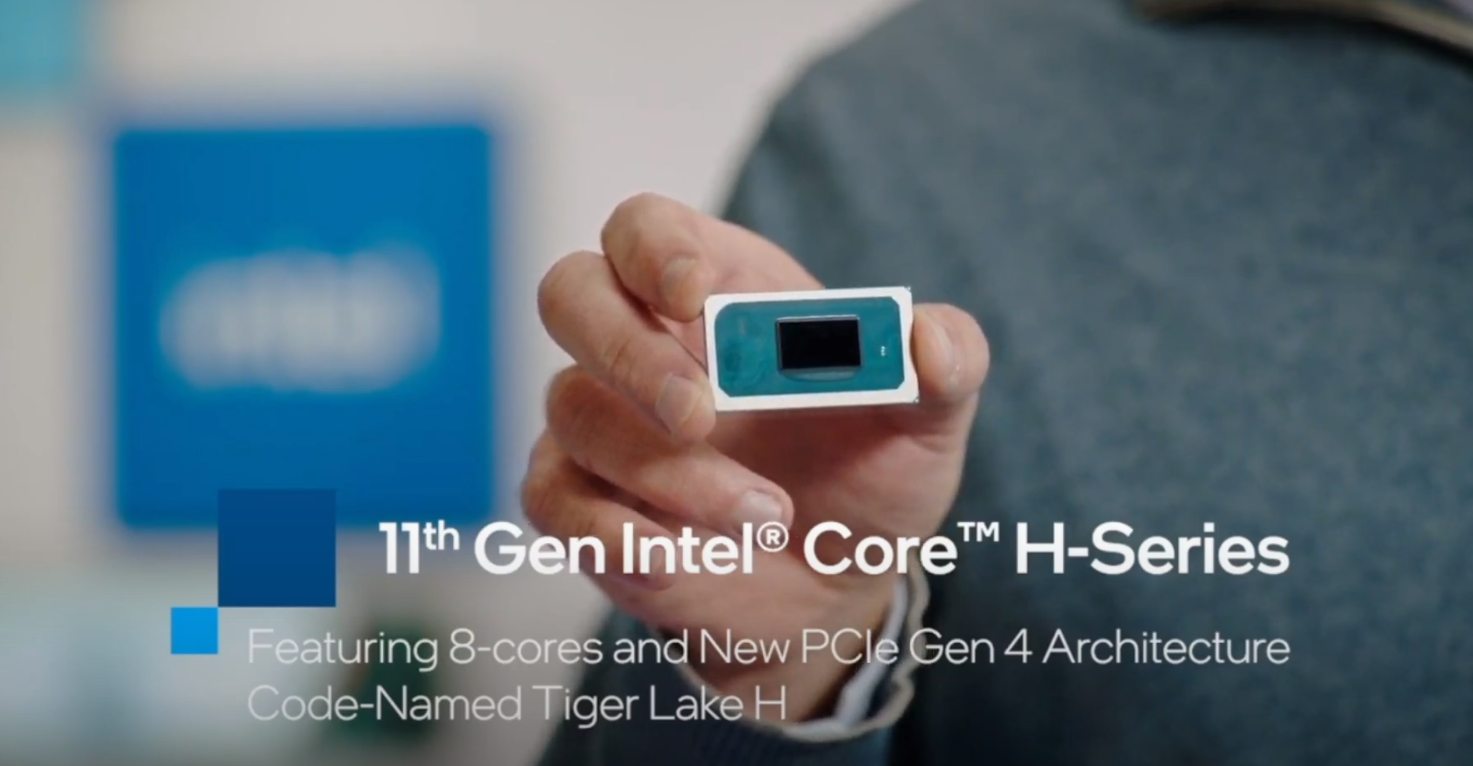 Intel’s vPro platform has been updated to 11th generation. With it, commercial and enterprise users can now benefit from the more efficient 10nm SuperFin transistors and Intel’s Xe graphics. The 11th gen Core i5 and i7 vPro processors also natively support Wi-Fi 6/6E, as well as Thunderbolt 4.0. Intel says that the new vPro platform is 23 per cent faster in productivity than the competition in Office 365 and up to 50 per cent faster in video conferencing.

On the heel of its vPro platform, Intel also announced the Intel Evo vPro platform to push the industry towards sexier laptop designs for business. Similar to the consumer Evo verification, Intel has set criteria around responsiveness, wake times, and battery life to ensure user experience.

Tiger Lake mobile processors have been around for some time now, but Intel has been mum on the arrival of its H-series chips. Seeing its release at CES 2021 is a sight for sore eyes.

The new H-series lineup consists of the Core i5-11300H, Core i7-11370H, and the Core i7-11375H Special Edition. They retain the 4 cores of the power-effient Tiger Lake U processors but raise the thermal design power (TDP) to 35W. This increased TDP refers to the configurable TDP (cTDP) up, the highest base TDP the processor can run at with adequate cooling.

Perhaps even more significant is the jump in the minimum configurable TDP. For Tiger Lake-H, the cTDP-down, the lowest TDP the processor can be configured, has been increased to 28W. The new Tiger Lake-H’s cTDP-down matches the cTDP-up of the highest-end Tiger Lake processor in the mobile segment.

Looking at the three SKUs, the only difference between the Core i7-11375H Special Edition and the Core i7-11370H is that the former has a 200MHz higher boost clock. The Core i5-11300H has the same number of cores but lower frequencies, as well as 4MB less cache.

Because Tiger Lake-H’s cTPD-down has more than doubled, it needs more powerful cooling solutions. Since it needs more thermal pampering, Tiger Lake-H will be more at home in gaming systems that have better cooling than ultraportables.

Other than the tweaked power and thermal parameters, Tiger Lake-H looks identical to the high-end Tiger Lake U processors launched last year. In this launch, Intel could be trying to squeeze out more performance from its existing chips by tuning the power profiles until it could release the next product. Intel was not immediately available for comment.

And the next product is coming soon. The company also showcased an 8-core mobile processor that’s still in the works. Not much is known about this chip other than it can hit 5GHz across multiple cores. 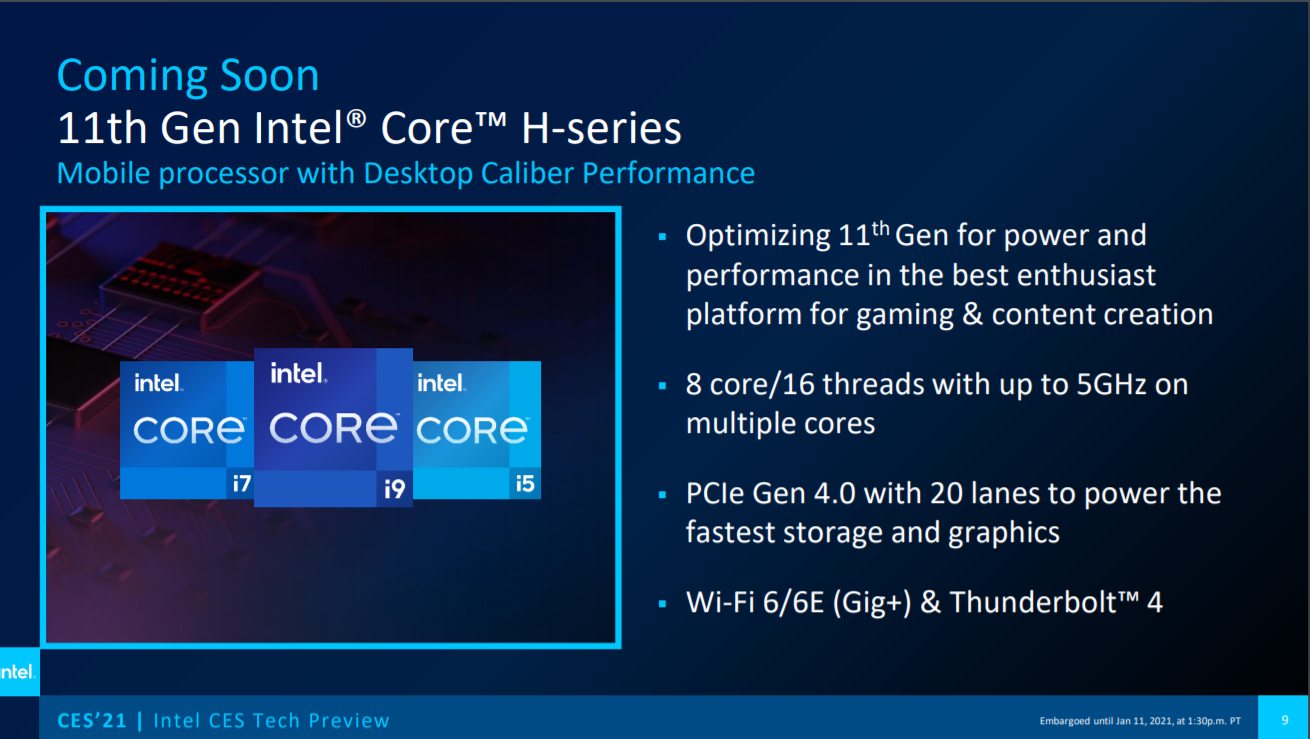 Tiger Lake-H will come with DDR4 support, Wi-Fi 6 and 6E, PCIe Gen 4, and a resizable base address register (BAR) feature that will give CPU access to the entire GPU memory. AMD’s Smart Access Memory (SAM) is built on the same concept.

Remote learning has exponentially driven up the demand for affordable mobile PCs. Intel suggests that 10 per cent of all PC purchased were for students. Targeting this sector, Intel launched the Pentium Silver N6000, Celeron N6211, Celeron N5100, and Celeron N4500 series processors built on the 10nm node. Intel claims that these new processors deliver up to 35 per cent overall application performance and 78 per cent better graphics performance gen-on-gen.

With the backport, Intel hopes to at least bring the architectural benefit of Sunny Cove to its 14nm node. According to the company, Rocket Lake-S achieves 19 per cent instruction per cycle (IPC) improvement over Comet Lake-S. Several slides also show that the Core i9-11900K can hit a max single-core frequency of 5.3GHz on a single core and 4.8GHz on all cores.

The Core i9-11900K is expected to carry to 20 CPU PCIe 4.0 lanes, four more than what Comet Lake processors offer and a generation newer. It will support up to DDR4-3200 memory. Intel will release a new 500 series chipset with Rocket Lake-S, but the processor will be backward compatible with motherboards using Intel’s 400 series chipsets.

Looking towards the future, Intel’s 12th gen Alder Lake processors are set to arrive in the second half of 2021. In addition to its enhanced 10nm SuperFin transistor, Alder Lake’s will see a new design by combining performance cores and efficiency cores into a single product. This approach is reminiscent of the long-standing strategy adopted by smartphone processors.

Tom Li
Telecommunication and consumer hardware are Tom's main beats at IT World Canada. He loves to talk about Canada's network infrastructure, semiconductor products, and of course, anything hot and new in the consumer technology space. You'll also occasionally see his name appended to articles on cloud, security, and SaaS-related news. If you're ever up for a lengthy discussion about the nuances of each of the above sectors or have an upcoming product that people will love, feel free to drop him a line at tli@itwc.ca.
Previous articleBains exits as Canadian innovation minister
Next articleHashtag Trending – AMD’s CES keynote; GoFundMe takes a stand; More concerns over Amazon workers