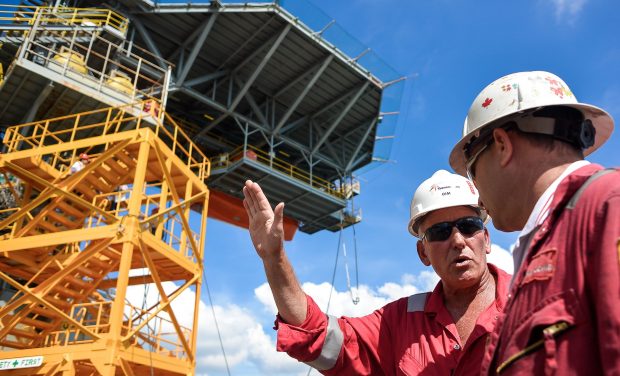 The four members of Minestar Group Corp.’s internal sales team needs about six to nine months to prepare a package of offers for an upcoming project. It took IBM’s Watson computing system 72 hours.

The Canadian utility and mine maintenance service company is one of at least six organizations in the oil and gas industry working with IBM Canada’s Natural Resources Solutions Centre’s (NRSC) latest innovation program aimed at transforming the sector. Long gone are the days of $100 barrels of oil, so IBM is helping oil and gas companies boost productivity, performance, and safety with the help of AI and Watson.

“When you look at contractors like us that are required to estimate a project to predict the number of man-hours it will take to execute the construction of that project, it’s very basic … we’re doing roughly the same thing my Dad did in the trade,” says Neal Barnes, president and CEO of Minestar.

He points to the tens of thousands of drawings and other documents staff have to pour over, and the ensuing eight to nine months companies need to review the submitted bids.

“So much can happen in 18 months when it comes to the price of oil … [Watson] helps shrink a year-and-a-half out of the bid cycle,” says Barnes.

Minestar is slated to use Watson consistently by the end of April. After that, Barnes says the company will look at using Watson to help project foremens’ build and manage schedules. The application of AI is foreign territory for Minestar, he adds.

“To be honest, I can barely use Outlook,” he laughs.

In Calgary, boxes full of paperwork have invaded the OpsMobil headquarters. The company is moving into asset management, and recently – with the help of an OpsMobil sister company – acquired a significant amount of assets such as pipelines and wells, according to president and CEO Ryan Tobber. This acquisition comes with vasts amount of data, most of which is sitting in those boxes.

“We stepped back and said rather than handling all of these paper files ourselves, organizing shelves and hiring engineers and technologists to go through the data to help us make decision, let’s jump into the future digitize it all and start developing an AI assistant or support network for all of our team,” Tobber explains.

Watson is the first step towards building an entire network that is AI-enabled, says Tobber, adding OpsMobil has agreed to a multi-year partnership with IBM to innovate and install systems that will include cloud and build on top of the foundation laid by Watson.

“It’s out of necessity … we have to reinvent ways we do things,” says Tobber. “Companies are spending their energy and intellectual horsepower to find ways of doing things better.”

Start small, grow from there

The use of AI and analytics in the oil and gas industry is nothing new, says Tim Workman, director of the Natural Resources Solutions Centre for IBM Canada.

He points to IBM partnerships with oil and gas companies from the U.S. and Australia, where Watson and other advanced technologies have been installed.

“But none of these projects were happening in Canada,” admits Workman. “So we wanted to have a more specific, Canadian approach, focused on regional innovation in the oil and gas sector.”

Rather than seek partnerships with Canada’s top players in the oil and gas industry, such as Suncor and Cenovus, IBM Canada developed an innovation consortium with multiple smaller companies six months ago, a strategy Workman says IBM Canada hasn’t tried before in this sector. Workman is expecting at least six or seven companies to join the consortium by the summer. Each company participating in the IBM-led consortium is contributing $1 million per year for the next four years. IBM is contributing $10 million. Workman says companies entering the consortium now will get a front-row seat to the innovation it ultimately generates.

“Below [Suncor, Cenovus], there are smaller companies that are equally innovative, potentially more innovative, but don’t have the internal capacity from a staffing perspective, or the economic interest due to the downturn in oil prices, in making significant investments in new technologies,” he says. “If we could make five or six Canadian companies really exceptional in the applications of advanced data science and data analytics to drive value creation, then we could use those companies as an example to bring other companies into those concepts.”

Over the next four years, participating companies are expected to reduce drilling costs, improve forecasting methods, reduce energy consumption and improve employee safety. After all, Watson still needs to fill the rest of its week after crunching a single bid package.

Alex Coophttp://www.itwc.ca
Former Editorial Director for IT World Canada and its sister publications.
Previous articleWe’re in a ‘constant state of cyber conflict,’ says international expert
Next articleONESTOP: Could this be the ideal model for public sector transformation?