A new report by Opensignal revealed that Canada’s download speed increased by roughly 40 per cent on average, and by as much as 70.7 per cent on Canada’s largest networks.

Opensignal’s May 2020 Mobile Network Experience report showed that Canada’s mobile download speeds jumped from 42.5 Mbps in 2019 to 59.6 Mbps in 2020. The high speed pushed Canada to the number one spot amongst G7 nations and a top-5 country globally, even compared against countries that have already rolled out 5G.

Furthermore, Opensignal recorded a significant increase in rural area mobile speeds. Between 2019 and 2020, rural Canada’s download speeds increased between 33.8 per cent to 71.4 per cent. Telus ranked first at 48.1 Mbps, followed by Bell at 43.6 Mbps, and Rogers at 34.4 Mbps. Even Rogers, the slowest carrier out of the Big Three, provided faster services in rural areas than average speeds in European countries like Germany, which averaged only 28.7Mbps. 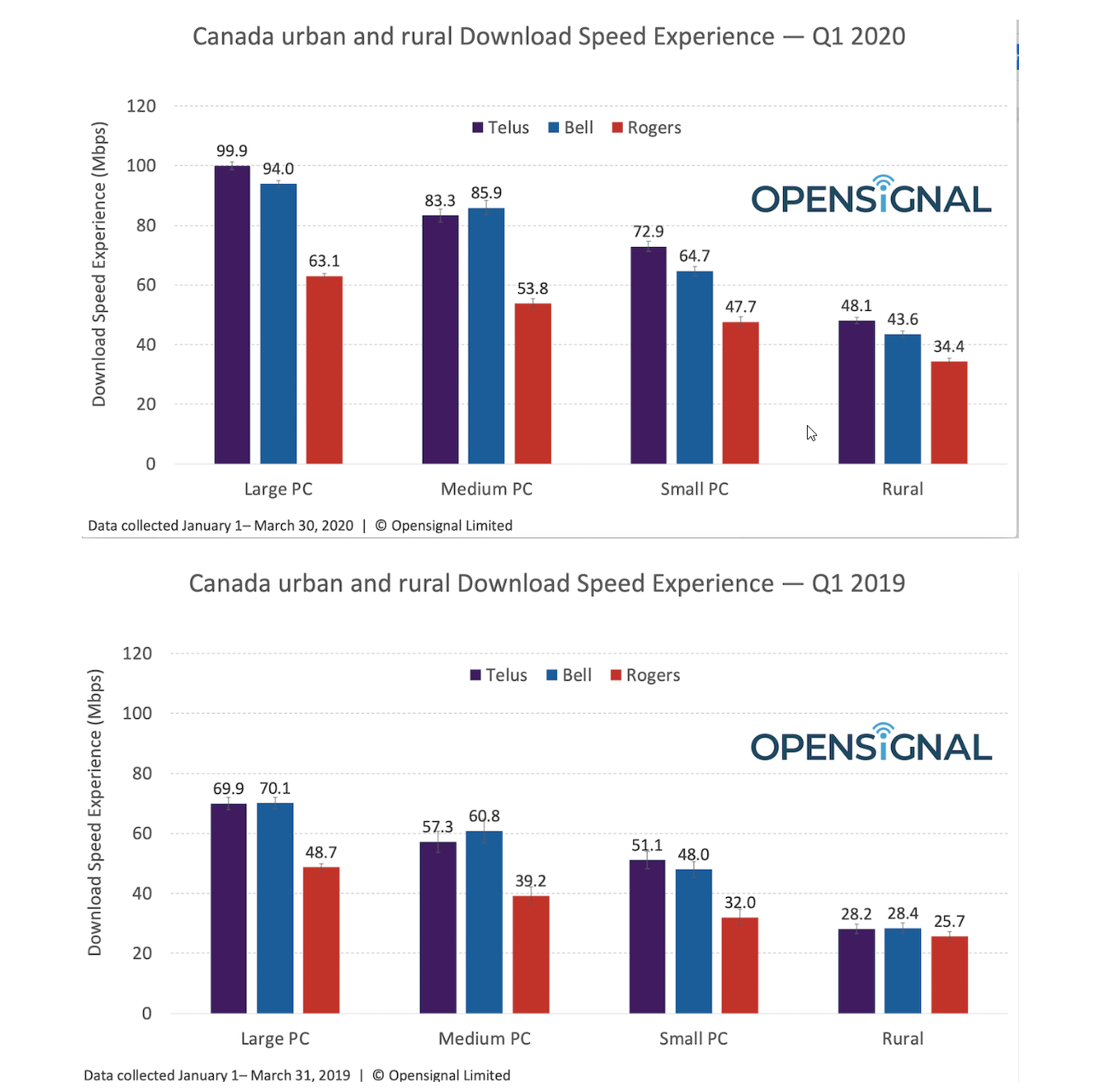 Ian Fogg, vice-president analyst of Opensignal, attributed the growth not only to the improvement in technology but also to carriers preparing for the 5G launch. Because the first phase of 5G deployment, called non-standalone 5G (NSA), will initially rely on the 4G core to deliver data between the radio access network (RAN) and the servers, 4G infrastructure needs an upgrade to accommodate the increased bandwidth. In addition, NSA 5G still carries data over 4G signals, so an LTE connection is required.

“Often what carriers will do is they’ll start upgrading some of the foundational elements their network in the run-up to launching 5G,” said Fogg. “Because you should upgrade that as well. That becomes the weakest link that comes up as the bottleneck.”

In large urban centres, Telus still ranks as the fastest mobile carrier with an average download speed of 99.9 Mbps. Bell trailed slightly at 94.0 Mbps, while Rogers significantly lagged behind at 63.1 Mbps, nearly 27 Mbps behind its closest competitor. 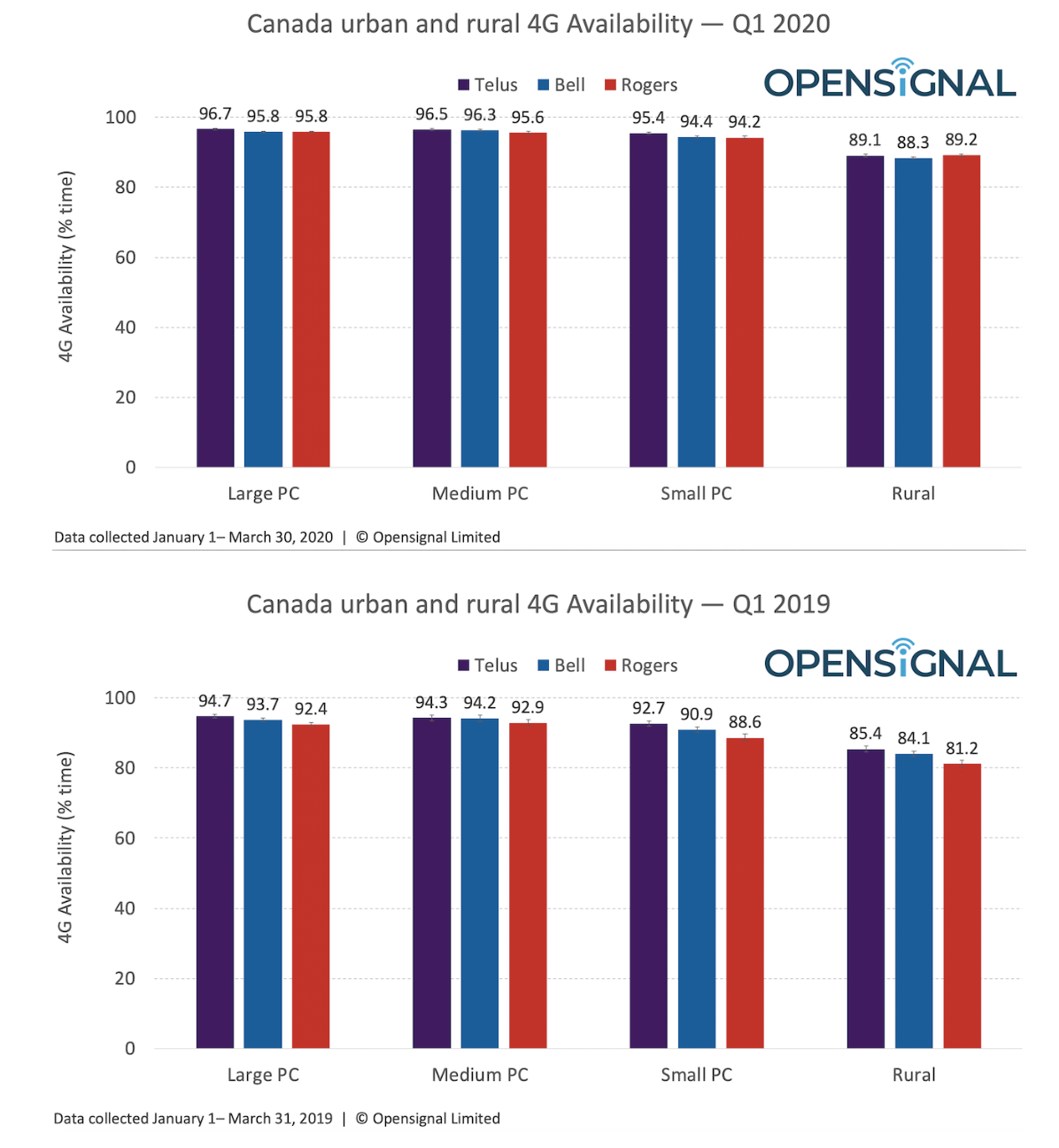 Canada’s 5G’s deployment encountered a setback last Friday when Innovation, Canada Science and Economic Development (ISED) announced that the highly-anticipated 3,500MHz spectrum 5G spectrum auction would be delayed by six months to June 21, 2021. Currently, Rogers is the only Canadian carrier with an active 5G service that delivers data in the 2,500 MHz frequency range.

Tom Li
Telecommunication and consumer hardware are Tom's main beats at IT World Canada. He loves to talk about Canada's network infrastructure, semiconductor products, and of course, anything hot and new in the consumer technology space. You'll also occasionally see his name appended to articles on cloud, security, and SaaS-related news. If you're ever up for a lengthy discussion about the nuances of each of the above sectors or have an upcoming product that people will love, feel free to drop him a line at tli@itwc.ca.
Previous articleHashtag Trending – Twitter fact checking; Jeff Bezos getting richer; cyberattack against CAA
Next articleHashtag Trending – IBM says no to facial recognition tech; New Google Maps features; WFH perks