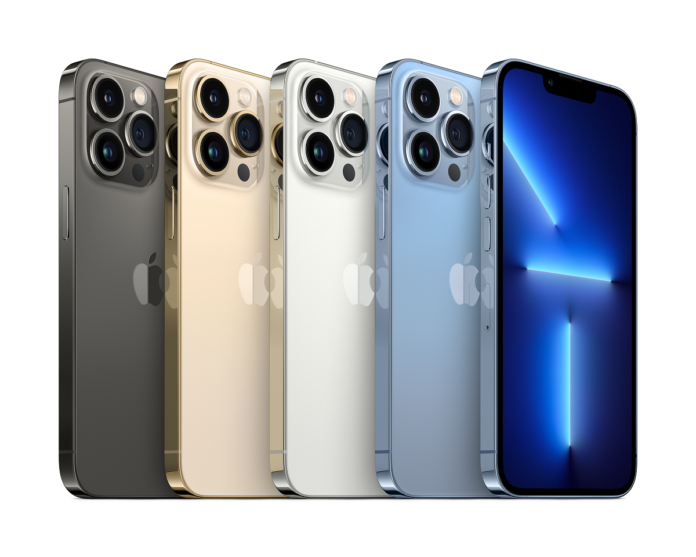 The 6.1-inch iPhone 13 Pro and the 6.7-inch Pro Max use the same design as the iPhone 12 Pro. Not that this is a problem – the phone still looks stunning with its shiny steel band and matte glass back. And as expected, they’re still IP68 water and dust resistant.

But that’s about the only similarity the iPhone 13 Pros have with the previous generation; nearly everything else has been upgraded.

iPhone displays have always earned top scores in colour performance, but their 60Hz refresh rate trailed behind that of flagship Android phones. That ends with the iPhone 13 Pro series. The two phones now feature a 120Hz Super Retina XDR Pro Motion display that can dynamically adapt its refresh rate to balance between battery life and eye candy. Apple also has raised its standard brightness from 800 nits to 1000 but left the maximum brightness at 1,200 nits. Moreover, the display is protected by a ceramic shield to protect it from drops and bumps.

It’s hard to tell these days whether you’re buying a phone with a camera or the other way around. The iPhone 13 Pro series features triple cameras: wide, ultra-wide and 3x telephoto cameras. The main camera received a big bump in pixel size, jumping to 1.9µm for better shooting experiences in low-light environments. Combine that with a wider aperture, and Apple says the iPhone 13 Pro series is twice as good as the iPhone 12 Pro Max in the same low-light settings.

The ultra-wide camera can now focus on subjects just 2cm away, improving its flexibility in macro photography. Its wider f/ 1.8 aperture also boosts its low-light performance by 92 per cent, says Apple.

Supporting the new camera functions is an all-new image signal processor (ISP) embedded in Apple’s new A15 Bionic system-on-chip (SoC). Aside from the ISP, the A15 Bionic also boasts a six-core CPU, a five-core GPU and a 16-core neural engine that increases productivity and gaming performance. The Neural Engine, capable of 15.8 trillion operations per second, enables neat camera features like the new Cinematic mode that can automatically change camera focus based on where the subject is looking.

Device storage has also been expanded to up to 1TB.

iPhone 13 also finally adopts 5G for faster download speeds and lower latency. This not only improves streaming and gaming but also enhances new functions like augmented reality (AR) and extended reality (XR). Apple says by the end of 2021, support for 5G on iPhone will increase to 200 carriers worldwide in 60 countries and regions.

Tom Li
Telecommunication and consumer hardware are Tom's main beats at IT World Canada. He loves to talk about Canada's network infrastructure, semiconductor products, and of course, anything hot and new in the consumer technology space. You'll also occasionally see his name appended to articles on cloud, security, and SaaS-related news. If you're ever up for a lengthy discussion about the nuances of each of the above sectors or have an upcoming product that people will love, feel free to drop him a line at tli@itwc.ca.
Previous articleWhy there must be a renewed focus on business continuity
Next articleHashtag Trending Sept. 15 – Instagram harms teens; Wozniak for space; Virtual influencer rakes in sponsorships